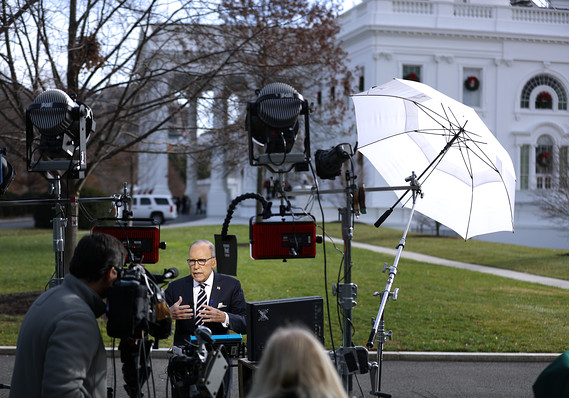 News reporters will no longer be allowed to use computers — just pen and paper — to write articles on key U.S. economic reports before they are released to the general public.

The Labor Department on Thursday said the media will be restricted from using any technology during so-called lockups, a process for distributing the news that’s been in place since the mid-1980s.

Bureau of Labor Statistics Commissioner William Beach said the goal is to protect the integrity of the data and ensure a level playing field. Some critics say the media gains an unfair advantage from early access.

The changes are slated to go into effect on March 1 and cover all reports from Labor and the Commerce Department. They include data on inflation, employment and gross domestic product, among other things.

During a lockup, reporters are confined to a secure government room and cut off from the Internet up to an hour ahead of the public release of these reports. They write articles on computers and file online immediately at the end of a lockup when the reports are made available to the broader public.

The original goal of the lockup was to enable reporters to ask questions of government experts so they could avoid mistakes and put the news into context. By and large, it’s still how they operate.

Yet worries have grown over the past decade about the security of the data and some critics argue the media has an unfair advantage.

A pair of Labor Department reviews in 2014 and 2016 found that some news organizations were earning large annual fees by packaging data in formats easily digestible by high-speed traders using computer algorithms to buy and sell stocks on the economic news.

The Obama administration took a series of steps to tighten security and even considered ending lockups altogether, but resistance from Congress and shifting priorities caused them to shelve those plans.

Beach cited the 2016 report by the department’s inspector general to support the new lockup restrictions. One of the media outlets that packages the government data for well-heeled clients is Bloomberg News, whose founder Michael Bloomberg is running for president in a bid to challenge Donald Trump in 2020.

A senior Labor Department official denied Bloomberg’s entry into the 2020 elections was factored into the decision making, pointing to the earlier Obama-era reviews. He also said the department has heavily invested in new technology so it can handle a crush of users hitting the Labor site when major economic reports are issued.

“We now have the capacity to make this change,” he said. “We can handle large surges of data use at 8:30 a.m.”

Yet forcing reporters to use old-fashioned pen and paper appears to go beyond leveling the playing field. It could potentially put them at a disadvantage since it would take for them longer to get the news out.

“That’s nuts. What’s the next step, make you chisel out your stories on stone tablets which are then to be distributed via oxen-drawn carts?” said one economist who asked not to be named. “Technology may march on, but that doesn’t keep us from stepping backward, or, I guess being forced to step backward. Good grief.”

I did Labor and Commerce lockups in the late 90s on DOS PCs, writing in Wordperfect and trying to file via a shareware BBS system that didn’t have a paid license and would time out quickly if nothing happened. Thinking about that still stresses me out.

Reporters might be better off writing and filing their reports from their office where they have computer and Internet access. If fewer and fewer go to the lockups over time, the BLS would likely get the green light to get rid of them entirely.

Two former BLS commissioners were split about the decision. Keith Hall, who ran the agency in the Bush administration, said lockups still play a useful role.

Yet Erica Groshen, head of the BLS in the Obama White House, supports ending the lockups given the relatively high cost of running them and the potential for security lapses.

The Commerce Department said it is reviewing the new Labor rules and that its reports will continue under the new procedure. Some major reports such as GDP, retail sales and consumer spending are published by Commerce.