Home
Stocks
Economic Report: U.S. economy adds strong 273,000 jobs in February, but coronavirus looms as threat to hiring
Prev Article Next Article
This post was originally published on this site 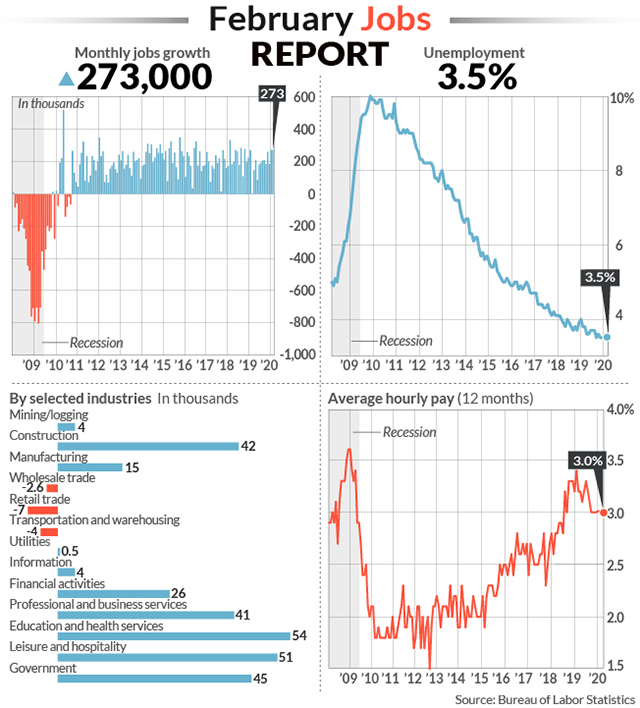 The numbers: The U.S. in February added a surprisingly robust 273,000 new jobs for the second month in a row, but the threat to the global economy from the coronavirus could act as a brake on hiring in the months ahead.

An acceleration in hiring in the past two months nudged the unemployment rate down to 3.5% from 3.6%, matching a 50-year low.

The increase in new jobs easily surpassed the 165,000 forecast of economists surveyed by MarketWatch. Hiring was strongest among health-care providers, restaurants, construction companies and government.

Before the employment report, premarket trading pointed to another big decline in the stock market on concerns about the impact of the coronavirus epidemic. Stocks have gyrated wildly in the past few weeks, sinking one day and surging the next as investors try to assess the economic fallout from the disease.

What the February employment report shows is that the U.S. economy was in very good shape before the coronavirus began to take a toll. So far the damage has been limited, but it could grow in the months ahead until the virus is contained.

What happened: Health-care providers led the way in hiring by adding 57,000 jobs. The industry has been one of the fastest growing for years in large part due to an aging population.

Restaurants and bars filled 53,000 positions and government employment rose by 45,000, including 7,000 temporary Census workers. The federal government is expected to add up to 500,000 temporary workers for the 2020 Census and hiring is already underway.

Construction companies boosted employment by 42,000 in January to mark the second straight big increase. Unseasonably warm weather and rising demand for housing have given the industry a big lift.

Low and still falling interest rates are stoking demand, but it remains to be seen if buyers are scared off by the coronavirus.

The amount of money the average worker earns rose 9 cents to $28.52 an hour last month.

The increase in pay in the past 12 months slipped to 3% from 3.1%. Wage gains have topped out at around 3% despite the tightest labor market in decades. Companies have relied more on fringe benefits and other sweeteners instead of higher wages to attract or retain workers.

Over the past three months, the economy had added an average of 243,000 new jobs a month, an extremely high number so deep into an economic expansion.

Big picture: The economy is unlikely to keep up the current pace of job creation with the threat from the coronavirus looming. Airlines are cutting back on flights, large public events are being canceled, people aren’t traveling as much and so forth. All of these things are curtailing economic activity and could even lead to layoffs.

Southwest CEO Gary Kelly said a sudden dropoff in ticket sales “has a 9/11 feel,” referring to the slump in the airline industry after the terrorist attack in 2001. The attack contributed to a deepening of the 2001 recession.

A recession could happen in a worst-case scenario, economists say, but it’s still too early to tell.

The 10-year Treasury yield TMUBMUSD10Y, 0.739% slipped to as low as 0.77%. Yields have fallen to a record low as investors seek the perceived safety of government bonds as a haven for their money.