Home
Stocks
Economic Report: U.S. jobless claims dip at end of February, no sign so far of layoffs tied to coronavirus
Prev Article Next Article
This post was originally published on this site

The numbers: The number of Americans applying for unemployment benefits fell slightly at the end of February, suggesting the economic damage from the coronavirus is still in the early stages and hasn’t caused companies to lay off any workers.

Initial jobless claims slipped by 3,000 to 216,000 in the seven days ended Feb. 29, the government said Thursday. The figures are seasonally adjusted. 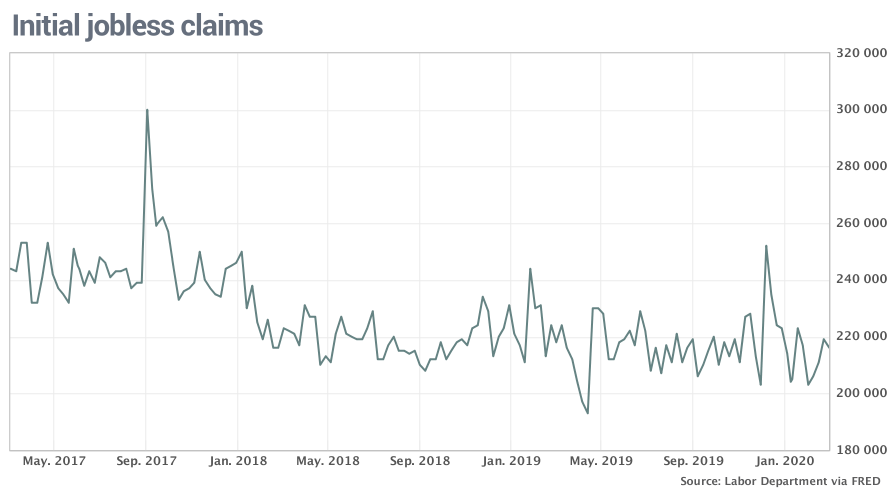 Economists polled by MarketWatch had forecast a 217,000 reading.

So far there’s little sign the COVID-19 epidemic has spurred companies to pare payrolls, but economists are watching closely to see if layoffs start to rise. More and more companies say their businesses have been disrupted by the viral outbreak, potentially hurting sales and profits.

New applications for unemployment benefits give a sense of how many people are losing their jobs. They touched a 50-year low of 193,000 in April 2019 and have hovered in the low 200,000s since then.

What happened: Raw or unadjusted jobless claims rose the most in New York, California and Virginia. The biggest declines took place in Massachusetts, Illinois, North Carolina and Rhode Island.

The more stable monthly average of jobless claims, meanwhile, rose by 3,250 to 213,000. The four-week figure filters out the weekly ups and downs to give a better sense of labor-market trends.

The total number of people already collecting unemployment benefits increased by 7,000 to 1.73 million. These claims had soared to as high as 6.6 million near the end of the 2007-2009 recession.

Read: These states had the lowest unemployment rates in 2019

Big picture: The unemployment rate fell to a 50-year low of 3.5% late last year to punctuate a decade of strong job gains. More than 20 million jobs have been created during the current expansion.

Yet hiring has slowed in the past year and the coronavirus could cause more companies to scale back until the outbreak is contained.

What might help companies forestall layoffs, economists say, is a tight labor market. If the economy recovers quickly, companies might find it hard to rehire or replace laid-off employees. That could discourage them from cutting payrolls.

Market reaction: The Dow Jones Industrial Average DJIA, +4.52% and S&P 500 SPX, +4.22% were set to open lower in Thursday trades after a huge rally the day before.

Investors are still very anxious about the coronavirus, though. The Dow has lost several thousand points in the past week and a half and has been sharply up and down in recent days.

The 10-year Treasury yield TMUBMUSD10Y, 0.945% slipped below 1% to a record low this week, as investors sought the perceived safety of government bonds to protect their money.