Home
Stocks
‘Elbow bumps’ instead of handshakes and avoiding holy water in church. How coronavirus is changing daily life in America
Prev Article Next Article
This post was originally published on this site 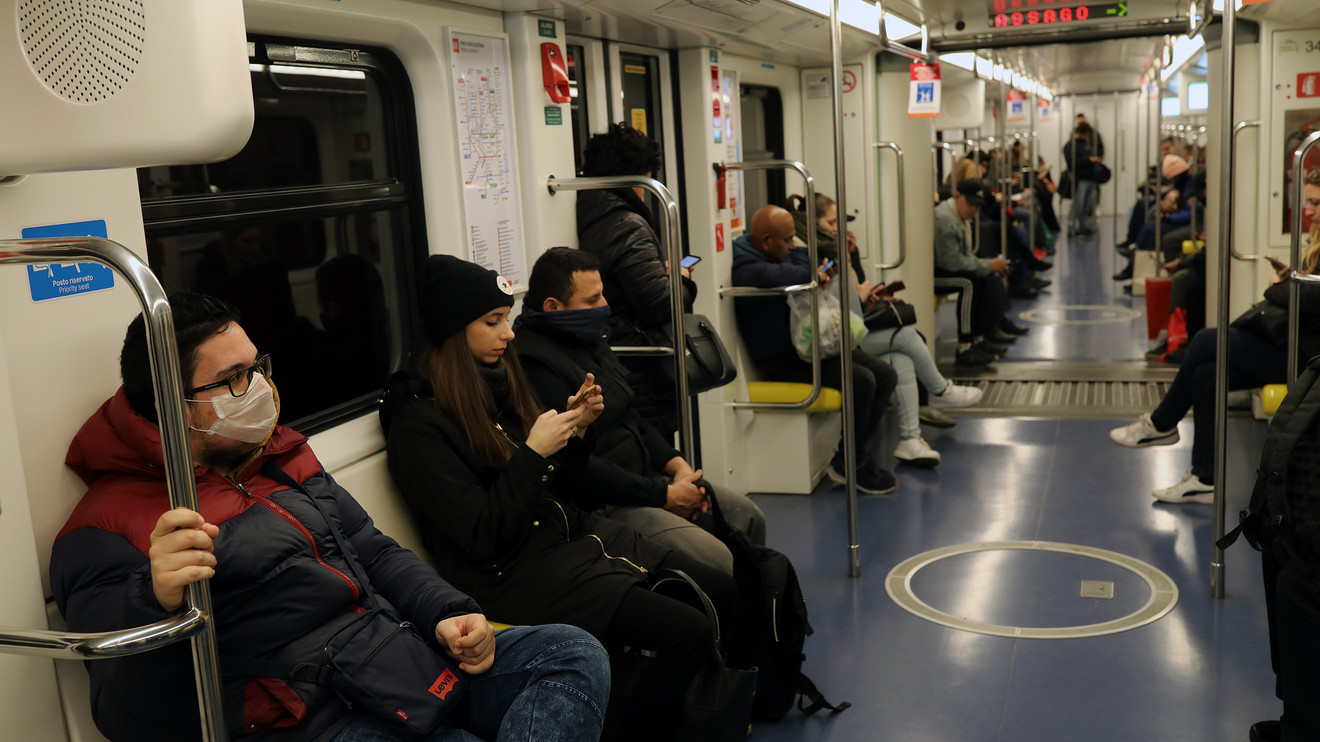 Some Americans are changing what they touch and where they go out of fear they’ll catch COVID-19, the sometimes-deadly virus that has caused respiratory illness in thousands worldwide. But experts advise striking a common-sense balance between nonchalance and paralysis.

There were 92,818 confirmed cases of COVID-19 and more than 3,100 deaths, primarily in China’s Hubei Province, and nine reported deaths in the U.S., according to the latest tally published Tuesday by the Johns Hopkins Whiting School of Engineering’s Centers for Systems Science and Engineering.

Nearly 28% say they’re currently steering clear of or limiting visits to public spaces or changing travel arrangements, according to a survey this month by Coresight Research.

Meanwhile, some churches have advised worshipers against shaking hands or dipping communion wafers into wine, according to reports. Businesspeople are rethinking the handshake and work travel. Commuters are increasingly wary of touching germ-riddled subway poles.

Some, it seems, have exercised such caution for years: “I have been going to #Starbucks for years and I never, NEVER touch the communal cream and milk. I always use a napkin, and often get comments from others around me when I do it. They all say it is a great idea,” Steve Rudin, a meteorologist for ABC7 News in the Washington, D.C., area, tweeted last week. “I agree. #flu #coronavirus.”

Let’s start with the basics. How does COVID-19 spread?

Experts at the Centers for Disease Control and Prevention believe that COVID-19 spreads primarily from person to person, between people who are within about six feet of each other and through droplets produced by a sick person’s cough or sneeze. The World Health Organization agrees that “the disease can spread from person to person through small droplets from the nose or mouth which are spread when a person with COVID-19 coughs or exhales,” and advises keeping more than three feet away from a sick person.

A person might also get the virus by touching an infected object or surface “and then touching their own mouth, nose, or possibly their eyes,” the CDC says, though experts don’t think this is the main form of transmission.

How long does it linger on surfaces?

The WHO remains uncertain of the length of time that COVID-19 can survive on surfaces, but notes that “it seems to behave like other coronaviruses.” “Studies suggest that coronaviruses (including preliminary information on the COVID-19 virus) may persist on surfaces for a few hours or up to several days,” the WHO says, adding that the length of time could vary based on the type of surface, humidity level and temperature, among other factors.

A recent Journal of Hospital Infection report analyzed 22 studies of other human coronaviruses, including Severe Acute Respiratory Syndrome (SARS) and Middle East Respiratory System (MERS), finding that they could stay infectious on surfaces like glass, metal or plastic at room temperature for up to nine days. Disinfecting surfaces can quickly and efficiently reduce these viruses’ infectivity, the authors wrote.

Viruses degrade and become less infective the longer they sit on a surface, Nancy Elder, a professor of family medicine at Oregon Health and Science University, told MarketWatch. But the ultimate window of a virus’s infectivity still “depends on the dynamics of physics and chemistry,” including whether it’s “protected” by a substance like mucus, added Philip Tierno, a clinical professor of Pathology and Microbiology at NYU Langone Health.

“Yes, they can desiccate and they can become inactive,” Tierno said. “But by the other token, they can be protected by things you wouldn’t suspect.”

So how do I protect myself?

Experts have mixed advice on the lengths people should go to avoid contracting the virus, but they generally agree on a few points: For starters, wash your hands properly and often, scrubbing with soap and water for the CDC-recommended 20 seconds and using an alcohol-based hand sanitizer in a pinch.

Don’t eat, drink or touch your mouth, nose and eyes — mucous membranes through which viruses can enter — without washing your hands first. “It’s a habit that almost all of us have, and we don’t even realize we’re doing it,” Elder said of face-touching.

Get a flu shot, added Gregory Poland, the director of Mayo Clinic’s Vaccine Research Group. After all, the flu virus has already hospitalized and killed many thousands of Americans this season, and its initial symptoms are identical to those of COVID-19, he said. “Now you’ve got people scared about coronavirus, who could quickly overwhelm the health system.”

OK, but should I avoid large gatherings? What about my workplace?

It depends. Tierno, for his part, recommended staying away from large congregations of people, whether in a playhouse, stadium or movie theater. “Would I go to a place where thousands of people are gathering?” Poland said. “No.” But the doctor will still go to his church, where he has asked leaders to issue a no-handshaking announcement from the pulpit.

Elder, meanwhile, argued that beyond taking common-sense precautions, refusing to leave the house and participate in social activities was “not a good way to live your life” for people who aren’t sick or at high risk for contracting the virus. She wouldn’t want voters to sit out Super Tuesday primaries, for example, because they fear a nearby voter might have a respiratory infection.

“One of the ways we stay healthy is by being social creatures, by having friends and by participating in society,” she said. “I think it’s more important to go out and do things and have a healthy social life, and then just take those precautions.”

As for work, Poland said employees should follow guidance from their employers on whether to work remotely. (Of course, not all workers have the ability to work remotely or even take sick days.) If you live and work in an area experiencing a COVID-19 outbreak, telework — and even teleschool — might be your best option. For example, Twitter TWTR, -2.48%   said this week said it was “strongly encouraging” its employees worldwide to work from home.

Do I need to avoid physical contact with other people? What about shared objects and surfaces?

“You don’t shake hands, you don’t hug people, you don’t come in close contact,” Tierno said, suggesting an elbow-bump greeting or a simple “hello” as alternatives. If somebody in your vicinity is sick and coughing, try to give them a six-foot radius, Elder said.

Poland advised against going to buffet-style environments that involve hundreds of people handling the same serving utensils. “If I am in a situation like that, I put a napkin around the spoon and then I use hand sanitizer before I actually sit down to eat,” he said. Tierno similarly urged against eating from community food receptacles where lots of people stick their hands, like candy bowls.

Poland also said he would avoid public restrooms in outbreak areas. If you have no choice but to use one, decrease your risk by not touching knobs or handles absent a protective paper towel, he said. Use a paper towel rather than an air dryer after washing your hands, he added.

As for touching surfaces at, say, your local coffee shop, practice common sense if you can’t immediately wash your hands in between grasping the shared milk or cream jug and drinking your coffee, Tierno said. Wash your hands once you’re finished, and don’t touch the mouth of your cup while you’re drinking.

“It’s not so much the touching things, though I avoid that where I can,” Poland said. “It’s the cleaning your hands before touching yourself, after touching something.”

Should I disinfect surfaces before touching them?

Tierno suggested it might be “prudent” to wipe down shared office equipment, like screens, phones and computers, with a disinfectant wipe. Elder said the same of surfaces you might have sustained or hours-long contact with, like an airplane tray top, but not for surfaces you interact with just briefly, like an ATM or elevator button.

“The most important thing is to wash your hands a lot and not touch the mucous membranes on your face,” she said. Some epidemiologists don’t even like to touch hotel TV remote controls, and wear gloves instead.

I have a vacation and/or work trip coming up. Should I cancel or postpone it?

Again, it depends. “It does not make sense to me to travel to areas where there are widespread outbreaks,” Poland said, adding that the same goes for allowing people from those areas into your meetings.

As companies and institutions grapple with whether to cancel conferences and other such large events, “you have to be wise” based on the associated risks, Poland said. “It’s hard to come up with a uniform rule like ‘Cancel all meetings,’” he said. “That doesn’t make sense in Kansas, but might make sense in New York where you have people coming from all over the world.”

The bottom line, according to Elder: “Common sense is better than panic.”

“We still have to live our lives,” Poland added. “Let’s take the approach of an abundance of caution and hope for the best.”