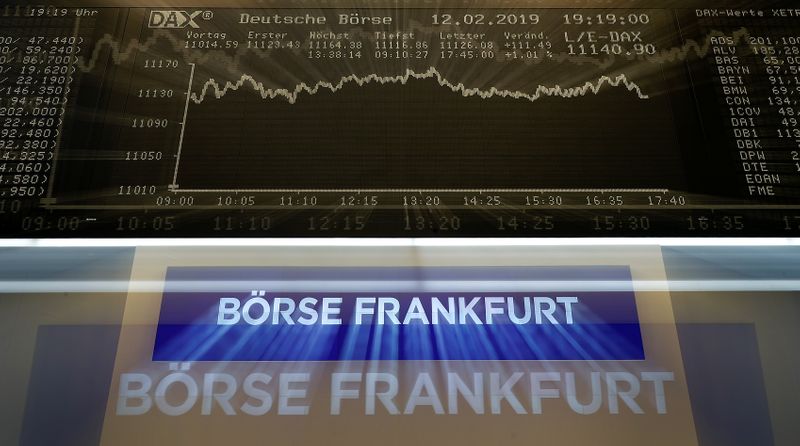 © Reuters. The German share prize index (DAX) board is seen at the end of a trading day at the German stock exchange (Deutsche Boerse) in Frankfurt

Even before Britain’s departure from the European Union last month, EU policymakers have long bristled that LCH, part of the London Stock Exchange, clears the bulk of interest rate swaps (IRS) denominated in the euro.

“Emotionally, the Europeans are very committed to gaining control of the euro as a currency in all its forms like clearing house activity,” Bruce Carnegie-Brown, chairman of the Lloyd’s of London insurance market, told parliament on Wednesday.

“I would expect them to push quite aggressively to re-shore that to the European Union and away from the United Kingdom.”

The push began in 2017 when Eurex Clearing, an arm of Frankfurt-based Deutsche Boerse, launched a profit-share to reward its 10 most active customers that increase clearing in euro-denominated interest rate products.

Matthias Graulich, a Eurex Clearing board member, said there are now 320 interest rate customers, up from 130 at the end of 2018.

“A third of our on-boarded clients were active towards the end of last year. The focus this year is to activate the ones not yet active.”

Many of these clients say they will start clearing at Eurex this year due to factors like the profit-share scheme and uncertainty over whether Britain will have access to the EU financial market from next January, Graulich said.

LCH, which declined to comment on its euro clearing strategy, will need EU permission known as equivalence to continue serving customers in the bloc after a “standstill” transition period ends on Dec. 31.

Eurex says it now has an 18% market share in terms of the notional value of outstanding contracts for euro-denominated interest rate products that are traded off an exchange.

“This is well on our way to our target of 25 percent, which we are set to achieve this year,” Graulich said.

Eurex notional outstanding market share in clearing longer-dated euro swap contracts has risen fourfold since the start of the partnership program. It stood at just over 12% in January compared with just under 90% at LCH, Eurex said.

Other favorable tailwinds for Eurex include interest rates in the United States and the euro zone converging over the last six months.

Graulich said this means hedge funds are reviewing their portfolio efficiencies as offsets between dollar and euro swaps are reducing, and they could pool euro swaps with other euro products.

“All these developments are going in the right direction to successfully establish an alternative liquidity pool for euro based OTC derivatives within the EU,” Graulich said.

“There is no inflexion point where everything switches from one platform to another.”

With migration seen as more of a medium term project, Eurex said it has no plans to beef up sweeteners.

Although LCH has a subsidiary in Paris, it may not make economic sense to fight off Eurex by investing large sums of money on a swaps clearing operation in the French capital.

Clearing euro rate swap trades from EU customers was just 6% of LCH’s total swaps clearing turnover of $576 trillion in the first half of 2018.

LCH has clung to its dominant market share so far by offering savings to banks from net positions across several currencies, not just the euro, a benefit industry officials say will be hard for Eurex to replicate anytime soon.

ISDA, a global swaps industry body, has estimated that fragmenting euro swaps clearing would result in a 16%‐24% increase in initial margin on house accounts, based on data from 12 large banks that dominate trading.

“It’s a bit like Facebook (NASDAQ:), the more clients you have the more efficient it gets,” said Ulrich Karl, head of clearing at ISDA.