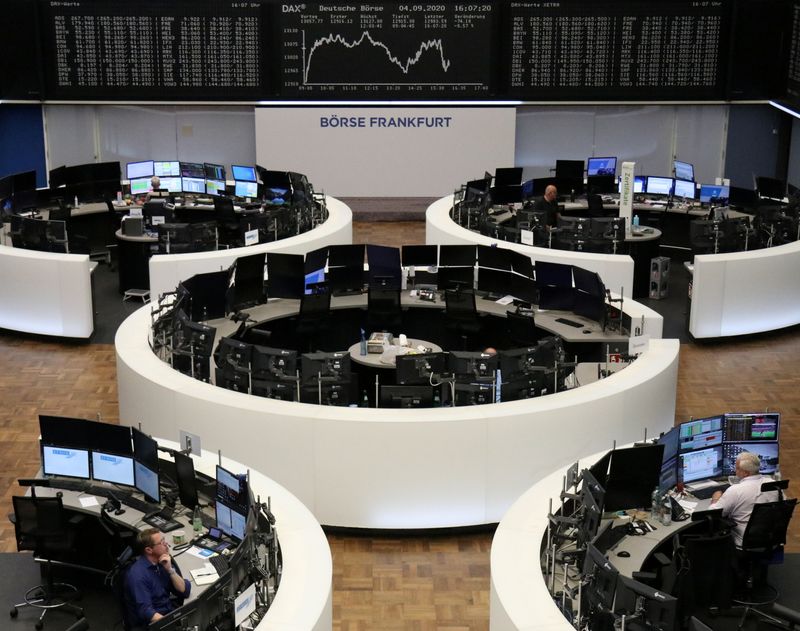 (Reuters) – European shares fell on Tuesday on fears that Britain was in danger of leaving the European Union without a trade agreement, with energy firms and technology stocks among the biggest decliners.

“Stocks in Europe had free rein yesterday as the U.S. exchanges remained closed because it was Labour Day. The weakness that we saw in big U.S. tech names last week, is still in play, and that is driving sentiment over here,” said David Madden, market analyst at CMC Markets UK.

News that Softbank (T:9984) made big option purchases during the run-up in the U.S. stock market also made investors question a rally in equity markets, with the trades being revealed just as a tech-led rally faltered.

Britain began a new round of Brexit trade talks this week by telling the European Union that it was ramping up preparations to leave the bloc without an agreement as the two sides bicker over rules that govern nearly $1 trillion in trade.

“This is the result of the typical prisoner’s dilemma: for fear of getting short shrift, an agreement is then reached that is disadvantageous for both sides but the ‘devil may care’ approach demonstrated by the British government does not exactly help to instil confidence.”

The STOXX 600 has traded in a limited range since June, but markets are bracing for the European Central Bank’s (ECB) policy meeting on Thursday, which could act as the next catalyst.

French electricity giant EDF (PA:EDF) sank 8% after announcing its nuclear output fell 17.6% in August due to the effects of the pandemic and reactor outages.

Data showed German exports rose in July, however, remained far below pre-crisis levels. Separately, figures showed the euro zone economy declined slightly less than estimated in the second quarter but was still the sharpest ever fall.