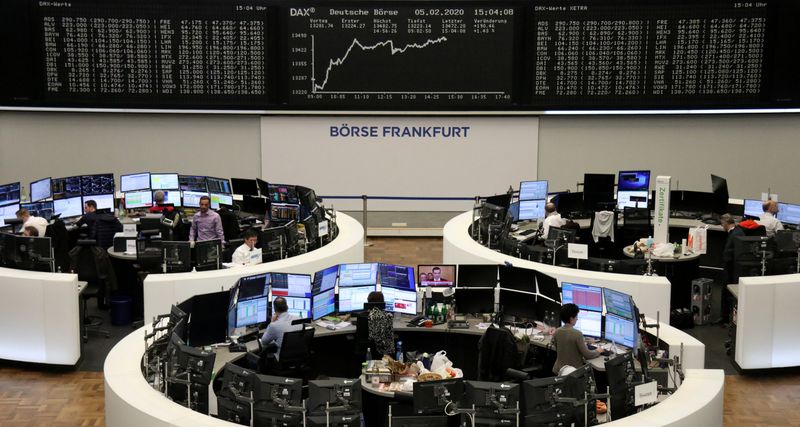 (Reuters) – European shares rose to a record high on Thursday as China’s intention to cut tariffs on U.S. goods and a swathe of strong bank earnings energized equity markets.

The pan-European STOXX 600 index () rose as much as 0.7% to a record high of 426.700. The index was looking at a fourth straight day of gains as it recovered from heavy selling last week.

China said on Thursday it intends to halve tariffs on some U.S. goods next week, which could help improve negotiating conditions for a second phase of a trade deal after the signing of a Phase 1 agreement between the two countries earlier this year.

The initial agreement had signaled no further escalation in a prolonged trade war, which had severely hampered global economic growth.

China’s plan also brewed some optimism over dampening the economic shock from a virus outbreak in the country, which has killed over 500 people and caused widespread disruptions in the world’s second-largest economy.

“Generally the mood in the market appears to be positive… The markets that have suffered the most when the virus outbreak was announced are now up,” said Simona Gambarini, markets economist at Capital Economics in London.

“It’s just a bounceback since then, which started before the tariff announcement was made, so (the announcement) probably added to it.”

In Europe, the banks subindex () was the top gainer among the regional sectors, led by Finish lender Nordea Bank ABP (HE:), which rose more than 5% after its fourth-quarter profit beat expectations.

China-sensitive basic resources () and automobile () subindexes rose about 0.8% and 1.8%, respectively.

Steel maker Arcelormittal SA (AS:) topped the STOXX 600 after its fourth-quarter profit beat expectations. The stock was also the biggest gainer on the basic resources index.

Italian shares () touched their highest level since May 2018. UniCredit SpA (MI:), the country’s top bank, was the biggest boost to the Italian bourse after it marked better-than-expected fourth-quarter results.