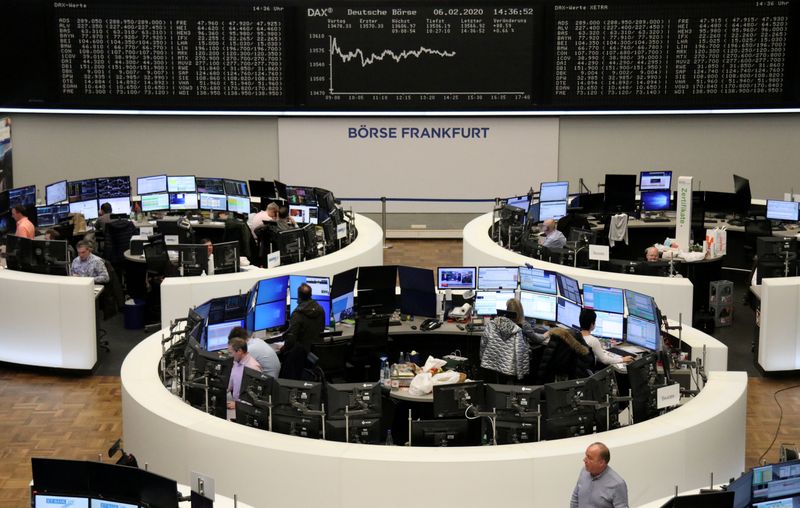 (Reuters) – European shares slipped from all-time highs on Friday, as investor sentiment was dulled by underwhelming corporate earnings reports and the rising death toll from the coronavirus outbreak.

The pan-European STOXX 600 index () fell 0.2%, snapping a four-day winning streak, as the number of deaths from the flu-like virus climbed to 636 and several more companies suspended operations in the country.

“We are probably going to see companies caution that sales have been hit as people are not going out to shops to buy and that is going to ripple through,” said David Madden, market analyst at CMC Markets.

British fashion brand Burberry Group Plc (L:) fell 1.8% after flagging a slide in demand from China and Hong Kong due to the epidemic.

China-exposed sectors such as basic materials, luxury and auto stocks, which have seesawed over the past two weeks on virus fears, were the biggest decliners on the day. [MET/L] [O/R]

Sentiment this week had so far been buoyed by a spate of strong earnings updates and China’s attempts to limit the economic fallout of the outbreak, helping the main index recover from a 3% slump last week.

Despite Friday’s declines, the STOXX 600 was on course for its best week since December 2016.

Economic data from the bloc this week had raised hopes that a slowdown may be bottoming out, but latest numbers showed German industrial output registered its biggest drop in more than a decade in December.

“The data has raised the risk that next week’s GDP data could bring back the R-word for the German economy,” said Carsten Brzeski, chief economist, Germany at ING, referring to fears of a looming recession.

Technology firm Ericsson (ST:) topped the pan-regional index after majority owner Cevian Capital said a U.S. interest in buying a stake would be positive, following comments from the U.S. Attorney General on Thursday that the country should consider taking a “controlling stake” in the company.