Home
Stocks
‘Everyone and their brother was messaging me on Facebook.’ DNA tests reveal long-lost relatives, but the rest is a minefield
Prev Article Next Article
This post was originally published on this site

For people like Cassandra Madison, direct-to-consumer genetic testing services from companies like 23andMe and Ancestry.com have proven revolutionary in filling gaps about their family history.

But connecting with biological relatives in cases of adoption or conception through sperm and egg donation doesn’t come with a rule book — forcing both parties to make difficult, emotional decisions, often on the fly.

The lawyer in the Dominican Republic who handled Madison’s adoption falsified paperwork and lied to adoptive parents about their children’s biological relatives.

Madison, who now lives in Virginia Beach, Va., was adopted as an infant in 1988 from the Dominican Republic by a white American couple. Throughout her life, Madison had little information about her biological family. “My mom told me as much as she knew, which was just that they were very poor and couldn’t afford to keep me anymore,” Madison, 31, said.

Attempts to find more information on her own always proved fruitless. The lawyer in the Dominican Republic who handled Madison’s adoption falsified paperwork and lied to adoptive parents about their children’s biological relatives, Madison said. “It always became a dead end,” Madison said.

Then one Christmas, Madison’s mother gifted her with a 23andMe genetic test, so she could learn about her heritage. When she got her test results last January, she was surprised. “I didn’t know you could find people,” she said.

In the Santiago airport in Dominican Republic I met my biological family for the first time ❤️🇩🇴 @TheEllenShow @23andMe pic.twitter.com/mjomqgpQEY

When Madison clicked on her results to see her relatives, she found over 1,000 family members had taken the DNA test, which involves spitting in a test tube, including a cousin who lived in Connecticut.

She quickly went about researching him on Facebook FB, +0.39%  and soon made contact. “Low and behold, 20 minutes later everyone and their brother was messaging me on Facebook,” Madison said. Months later, she made the trip down to the Caribbean country, meeting her relatives for the first-time in person.

Also read: 23andMe revealed that my daughter is not mine — can I claim back child support from the biological father?

‘Low and behold, 20 minutes later everyone and their brother was messaging me on Facebook.’

Genetic testing is fast becoming ubiquitous. As of 2018, around 60% of Americans with European heritage were likely identifiable from their DNA via searches of consumer websites from companies like 23andMe and Ancestry.com, regardless of whether they had ever taken a genetic test. One study estimated that around 100 million people will have their DNA mapped by one of these companies by 2021.

In situations where people were adopted or conceived with the assistance of a sperm or egg donor, the services from companies like 23andMe and Ancestry.com have removed the veil of secrecy that long existed over these relationships.

Don’t miss: 23andMe can open a Pandora’s Box of a family’s medical secrets: ‘As hard as it is knowing, not knowing is much worse’

“Consumer DNA tests have changed who’s in power of the information,” said Brianne Kirkpatrick, a certified genetic counselor and founder of the counseling firm Watershed DNA.

Historically, mothers typically were the only ones who knew the biological origins of their children. For decades, most adoptions were closed, meaning communication between the biological parents and their child was restricted. In many circumstances, their identities were also hidden.

‘Donors are being identified (and in some cases contacted) whether or not they want to be.’

Until recently, most sperm and egg donors made their donations under the expectation of anonymity.

“For those who went through these procedures in the last few decades with the understanding that the donors would be anonymous the rules of the game have changed dramatically and donors are being identified — and, in some cases, contacted — whether or not they want to be,” said Kim Kluger-Bell, a psychotherapist who specializes in infertility counseling. “None of the fertility clinics or sperm banks I know of really anticipated this happening.”

With so many people having taken tests already, it can be easy for some to find biological relatives. But that, too, can lead to awkward circumstances, particularly when someone connects with a relative other than their biological mother or father or vice-versa.

“I’ve heard stories of the parents of a sperm donor going on Ancestry.com and identifying a biological grandchild they never knew about — it turned out their son had anonymously and privately donated sperm to a friend and agreed not to discuss the matter with anyone else,” Kluger-Bell said. “The parents of the donor wanted to contact the bio-grandchild and the parents of that child felt that this was completely inappropriate.”

Ancestry.com and 23andMe have created resources for people who find themselves in these positions. “There are certainly cases where a discovery might be quite unexpected. We take our responsibility towards our customers — and the potential impact of complex discoveries — very seriously,” said Dana Chinnici, communications manager at Ancestry.

Both companies said they have experts on staff who can help customers work through some of the unexpected results they may encounter. 23andMe has a support page for customers and their family to navigate unexpected relationships, a company spokeswoman told MarketWatch.

Additionally, with both companies, customers can opt in or out of being listed as a match with other people.

When Madison was faced with the choice of reaching out to the relatives she connected with via DNA testing, she didn’t hesitate. “As kids we don’t ask to be here,” Madison reasoned.

Of course, that approach may not work for everyone. Experts who deal with situations involving adoption, and sperm or egg donation advised patience and caution when reaching out to relatives, but noted that there’s not one correct approach. 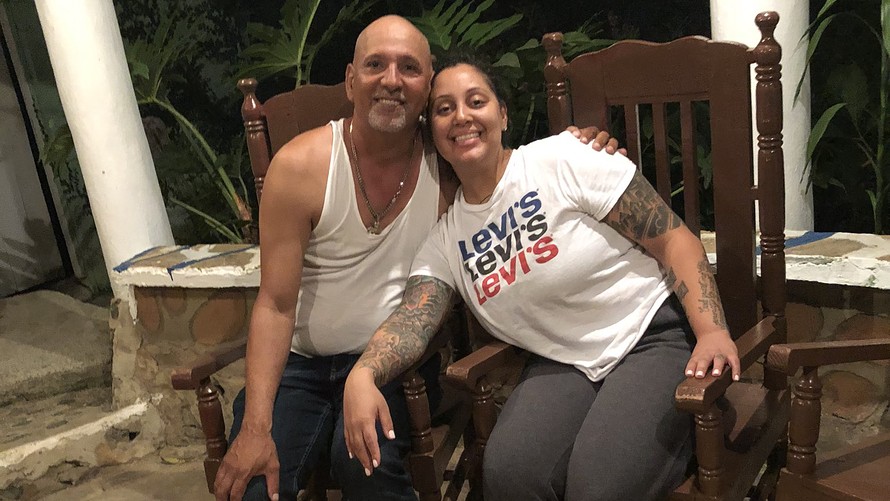 Cassandra Madison, who was adopted as an infant, met her biological father (pictured here) for the first time last March after connecting with other blood relatives through 23andMe.

“There is no ‘one size fits all’ scenario,” said Amy Johnson Crow, a certified genealogist. “It’s important for the person making the contact to realize that the contact might not be welcomed. Although we all have a right to know our genetic history, we cannot force that biological parent to talk or to have a relationship.”

Read more: I discovered through Ancestry.com that my biological father is someone else — can I claim an inheritance as his heir?

Give the other person space: These revelations can have major ripple effects for other people, and so it may take time for the person to respond. “Remember contact starts with knowing very little of each other and, like any other relationship, needs to grow and build over time. Genetics confers relatedness but not relationships,” Braverman said.

Understand potential legal ramifications: Reaching out to a biological relatives through 23andMe or Ancestry.com could violate the terms of an adoption or sperm/egg donation agreement. One woman was threatened with a $20,000 fine after reaching out to the biological grandmother of her daughter who was born via sperm donation.

Establishing contact could leave you vulnerable to lawsuits, so before doing so it’s important to review the terms of these agreements in advance.

Consider hiring a professional: DNA tests are far from the only route toward discovering one’s biological relatives. Genetic counselors and genealogists can assist in uncovering a person’s family without these services. Moreover, these professionals can serve as an intermediary in establishing first contact with one’s biological family. Kirkpatrick has served as an intermediary for clients in the past and said it can help slow down the process. “Creating that buffer of space and time can ultimately lead to things going well in the end,” she said.

An intermediary can also help in retrieving information from a biological relative, such as a family medical history, in instances where they do not desire further contact. Of course, this can come with trade-offs. “Using an intermediary removes the pressure of an immediate response but also removes the real ‘voice’ that is reaching out,” Braverman said.

Keep your expectations in check: Having too high of expectations from the outset can easily lead to disappointment. To that end, experts suggested doing some self-reflection to understand what an adoptee or individual conceived via sperm or egg donation wants out of a possible connection, whether it be a relationship or something more simple like a family medical history.

“Avoid making assumptions about what this biological relationship may mean to the other person,” said Andrea Mechanick Braverman, a clinical professor of obstetrics and gynecology at Thomas Jefferson University.

When Madison eventually made contact with her biological family in the Dominican Republic, joy was quickly met with sadness. She found out that her birth mother had already passed away. Additionally, she also found that some of her relatives were more interested in how much money she had than in forming more meaningful relationships with her. For those and other reasons, Madison said she would not have been able to handle this whole experience without the support of a therapist.

Despite this, Madison said she doesn’t regret taking the DNA test or establishing contact with her biological family. “I’m learning a whole other side of me and can embrace it,” she said. “It was the best thing to go down there and to have people say, ‘Oh my God, you look just like your mother.’”