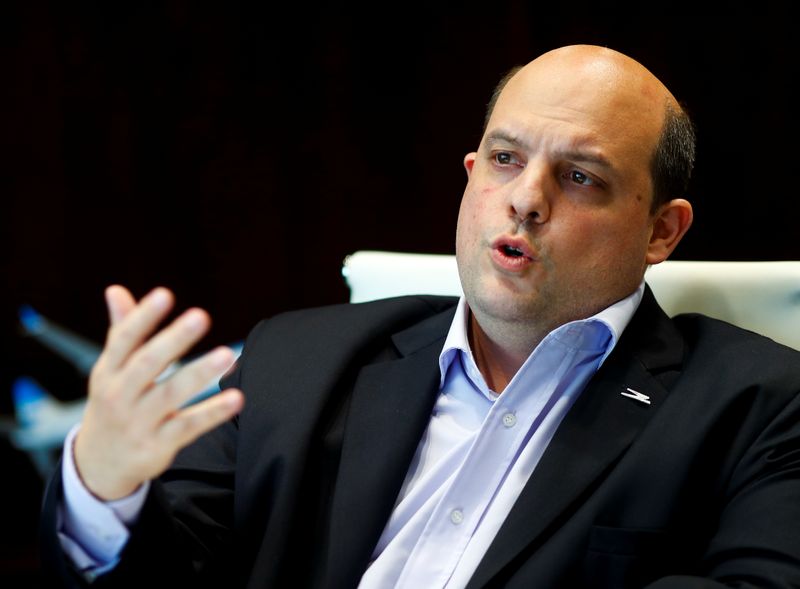 © Reuters. Aerolineas Argentinas CEO Pablo Ceriani gestures during an interview with Reuters at his offices, in Buenos Aires

BUENOS AIRES (Reuters) – Aerolineas Argentinas will add new flights to New York and Madrid as the government-controlled carrier seeks to ramp up sales outside its home country and boost income in an effort to beat back persistent operating losses.

In an exclusive interview with Reuters, the chairman of Argentina’s namesake airline said he expects income to hit $1.7 billion in 2020, in line with the previous year, thanks to the sale of nearly 13 million tickets.

“If we can carry out our growth plan, the company’s deficit will gradually be reduced,” said Pablo Ceriani, who took over as chairman of the company’s board in December under incoming Argentine president Alberto Fernandez.

Aerolineas [AERA.UL] has an operating deficit of $570 million.

The airline, which currently flies four times a week to New York, will add an additional flight there in May, and another in July. It will also boost flights to Madrid from seven to 10 in July. Increasing tourism within Argentina is also part of the company’s growth strategy, along with strengthening its operations throughout the region, Ceriani said.

Improving its fleet is another objective, he added.

The company hopes that toward the middle of the year it will get its five Boeing (NYSE:) 737 MAX airplanes back online, Ceriani said.

The U.S. planemaker’s once best-selling jet, the 737 MAX, was grounded in March following two fatal crashes that killed 346 people.

“Boeing has already agreed to compensation with other airlines. We are asking for equal treatment,” said Ceriani. “There is a good predisposition to find a way out of this situation that is satisfactory to us.”

“The compensation (from Boeing) can take different forms. It can be a direct payment or come by way of some other benefit, such as future deliveries,” Ceriani said.