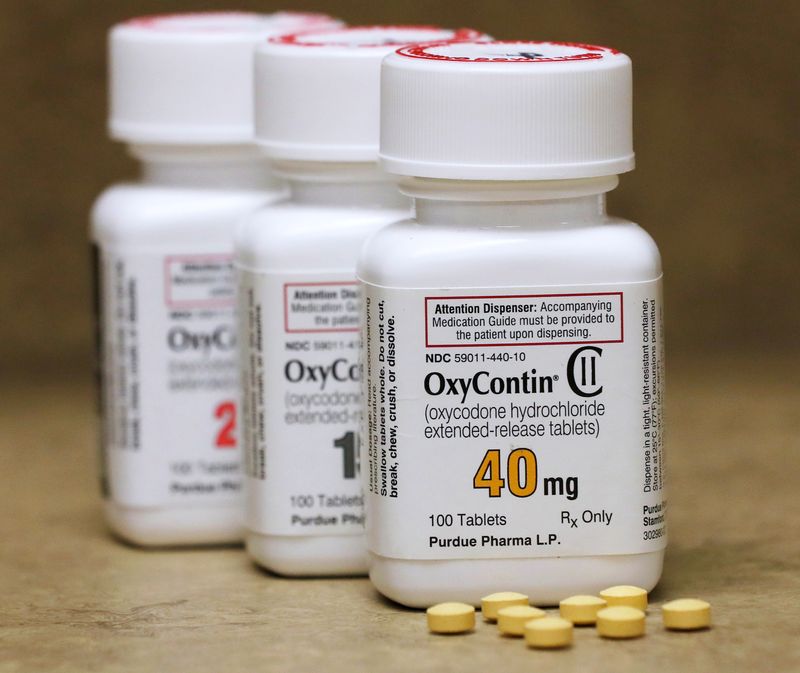 © Reuters. FILE PHOTO: Bottles of prescription painkiller OxyContin made by Purdue Pharma LP on a counter at a local pharmacy in Provo

By Mike Spector and Tom Hals

NEW YORK (Reuters) – OxyContin maker Purdue Pharma LP is the unnamed company that surfaced in criminal charging documents filed earlier this week in a probe of illegal kickbacks from drugmakers, according to people familiar with the matter.

The vendor allegedly received a roughly $1 million illegal kickback from an opioid company identified in the documents as “Pharma Co. X.” The unnamed company is Purdue Pharma, the people familiar with the matter said. Purdue was not criminally charged in the case or accused of wrongdoing.

“As Purdue Pharma has previously stated, the company is cooperating with investigative demands by various components of the U.S. Department of Justice in connection with criminal and civil investigations of the company,” the Stamford, Connecticut-based drugmaker said in a statement.

“Purdue Pharma is engaged in ongoing discussions with the DOJ regarding a potential resolution of these investigations and therefore the company has no comment at this time,” it added.

Representatives for Purdue’s controlling Sackler family had no immediate comment. A spokesman for the Vermont U.S. attorney’s office declined to comment and a Justice Department spokeswoman in Washington did not respond to a request for comment.

The development intensifies pressure on Purdue and the Sacklers as the company holds talks aimed at resolving the Justice Department investigations. Resolving those probes is a condition of a tentative multibillion-dollar settlement with more than 2,600 cities, counties and states that have sued Purdue and its wealthy owners seeking to hold them responsible for the opioid epidemic.

The company and the Sacklers deny they are to blame for the crisis that has caused some 400,000 deaths between 1999 and 2017, according to U.S. health officials.

Purdue filed for bankruptcy protection in September in the hopes of hammering out a final settlement it values at up to $10 billion.

The vendor at the center of the kickback investigation is Allscripts Healthcare Solutions Inc’s (O:) Practice Fusion unit.

It agreed to pay $145 million to resolve criminal and civil allegations that it solicited and received kickbacks from several drugmakers in exchange for embedding alerts in physicians’ software to boost sales of their products, the Vermont U.S. attorney’s office said.

As part of the settlement, Practice Fusion entered into a deferred prosecution agreement to resolve criminal charges linked to the illegal kickback it received from the unnamed company, which sources identified as Purdue.

Practice Fusion also resolved a civil allegation that it submitted false claims to federal healthcare programs in relation to the kickback arrangement with the unnamed opioid company, prosecutors said.

Reuters was unable to learn the identities of the other pharmaceutical companies involved in the case.

Practice Fusion began soliciting payments from Pharma Co. X in late 2013 in exchange for creating an physician alert designed to boost opioid prescriptions by suggesting doctors focus on assessing and treating a patient’s pain symptoms with opioid medication as a preferred option.

Practice Fusion pitched the software as a way to influence doctors and counter the unnamed company’s declining opioid sales, stemming from heightened public awareness of addiction risks, according to court documents.

The goals of the alerts was to create new opioid patients and convert current users from immediate-release opioid medications to highly addictive extended-release drugs, according to court documents.

The alert on the Practice Fusion platform, used by tens of thousands of healthcare providers, was triggered 230 million times from July 2016 until the spring of 2019, according to court documents.

He said Allscripts has strengthened Practice Fusion’s compliance program and is aware of the devastation opioids have caused to U.S. communities.