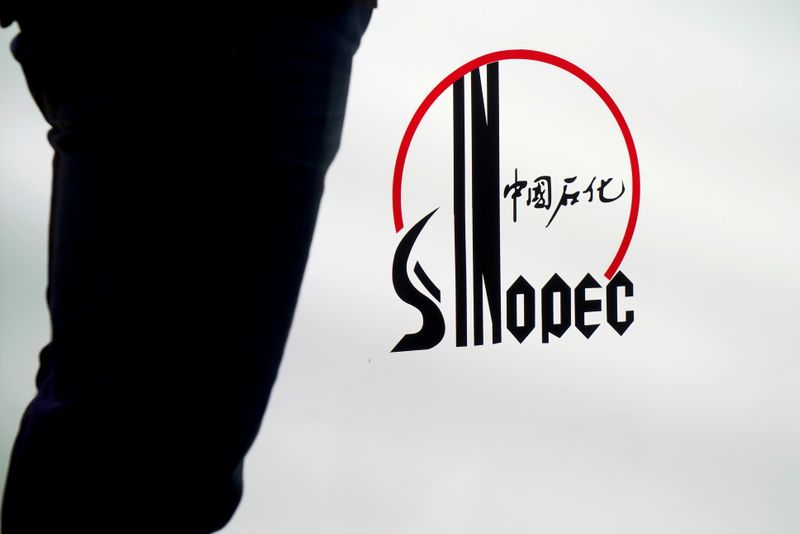 © Reuters. FILE PHOTO: Man stands next to a logo of Sinopec at an expo on rubber technology in Shanghai

SINGAPORE (Reuters) – China’s Sinopec, expected to be the next major Chinese buyer of U.S. liquefied (LNG), is planning to review terms of a potential $16 billion supply deal with Cheniere Energy after a sharp drop in LNG prices, industry officials said.

That could delay sign-off on a deal that would help Beijing meet ambitious targets it set for U.S. energy purchases in a Phase 1 trade agreement it signed with the United States on Wednesday.

Sinopec and Texas-headquartered Cheniere had been expected to sign the 20-year deal once a trade truce was reached between Beijing and Washington.

“(The deal) will be renegotiated… over delivery terms and price,” said an industry executive with knowledge of the matter, who declined to be named as the matter is not public. “It may not be tough, but will take time.”

Another source familiar with the talks said many items needed to be reviewed as U.S. gas prices have more than halved since late 2018.

“Sinopec is talking to several other U.S. suppliers,” said the second source. “It’s really not clear at this stage what will come out.”

The firm, as one of the few state buyers with appetite to sign new multi-year LNG supply deals, also needs to lobby Beijing to remove or rebate a 25% tariff that has made U.S. imports uneconomical in the past year, one of the sources said.

Sinopec, which plans to more than double its LNG receiving capacities to 41 million tonnes by 2025, emerged last year as China’s biggest spot buyer of LNG, as it is a much smaller purchaser under long-term deals than PetroChina or CNOOC.

As they are already committed to other long-term contracts, those two firms are much less likely to seek new supply agreements with U.S. exporters.

They are also facing slower domestic demand growth and weaker prices, which have led to losses in their LNG import business.

State oil firm CNPC has already fufilled its supply needs through existing deals with Cheniere, and is also anticipating new supply from its investments in areas such as the Russian Arctic and Mozambique, said one trading executive.

The prospect of buying U.S. LNG is even more remote for China’s so-called second-tier independent gas companies, because they have little access to terminal facilities.

“We’ll be in close contact with U.S. suppliers, but price is always the key,” said Frank Li, assistant to the president of private city gas distributor China Gas Holdings. “For now Russian pipeline gas is cheaper, Qatari gas is cheaper.”

A top state-oil trading executive said his level of management had received no internal briefing from the government over what products Beijing had in mind when agreeing the Phase 1 trade deal.

“We’re already under steep pressure to absorb high-cost term supplies… and as the market is expected to stay over-supplied beyond 2023, why should we sign up to more term deals?” a CNOOC gas manager said.