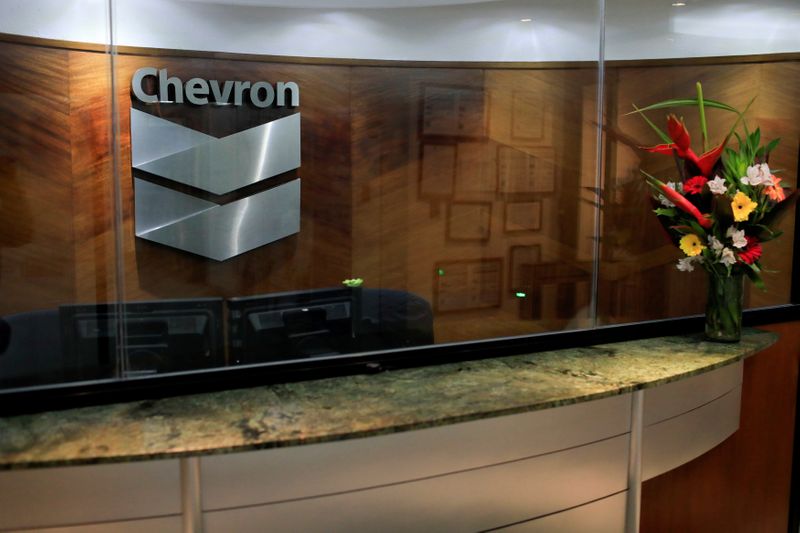 © Reuters. FILE PHOTO: The logo of Chevron is seen at the company’s office in Caracas

While one-time asset sales or write downs were large factors, the two companies said earnings suffered from weaker margins in crude oil, , chemicals and fuel production. They gave tepid outlooks for the near term.

“There’s no silver bullet on improving returns in a flat commodity price environment,” said Chevron Chief Executive Mike Wirth. “You roll up your sleeves and you get to work on all the little things.”

Shares of Exxon and Chevron were both at least 3.5% lower in trade on Friday, pressured by the results and worries about slowing global economic growth.

Chevron (N:) swung to a loss of $6.61 billion from a year-earlier profit of $3.73 billion. The company had $10 billion in charges including writedowns on the value of oil and gas properties that were no longer economic to pump. Excluding charges, its $1.49 cent a share profit topped estimates.

This week, Royal Dutch Shell’s shares hit a three-year low after it laid out a plan to pull back on share buybacks amid slower global growth. BP PLC (L:) and Total SA (PA:) report financial results next week.

Exxon CEO Darren Woods said its natural gas, refining and chemicals businesses have suffered from prices near or at decade lows. Exxon will keep investing in new projects on the belief that a growing global middle class will drive demand for its products, Woods said, describing the margin weakness as “a short-term impact.”

Exxon and Chevron are racing in the Permian Basin, the top U.S. shale field, to each reach 1 million barrels per day of production, but neither is anywhere near that level right now.

Exxon’s output rose 54% from a year ago while Chevron’s gained 36%.

Values are down across the oil and gas sector, prompting ongoing speculation that large companies will acquire smaller ones in the Permian Basin. Woods, though, said that the best opportunities are usually the ones “that you can generate organically.