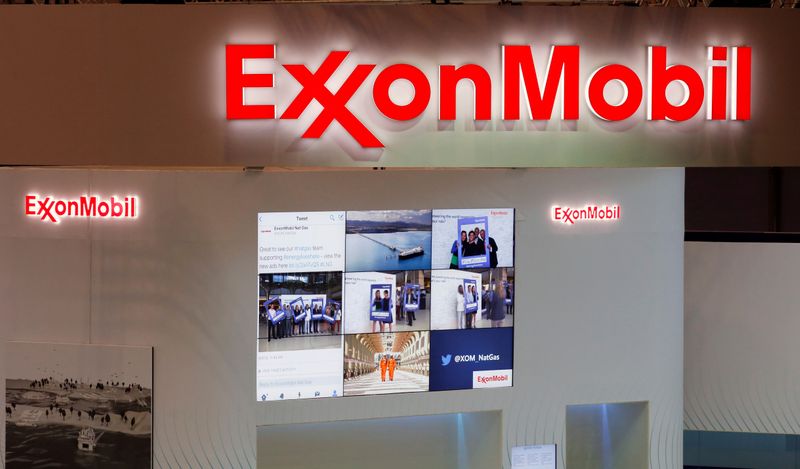 © Reuters. FILE PHOTO: Logos of ExxonMobil are seen in its booth at Gastech, the world’s biggest expo for the gas industry, in Chiba

HOUSTON (Reuters) – Exxon Mobil Corp (N:) on Friday reported a 5.2% drop in fourth-quarter profit on weakness in its refining and chemicals business and flat year-on-year oil and gas output, with asset sales helping to stem the decline.

Oil companies last quarter suffered from weaker prices for their products, and in Exxon’s case it has been spending heavily to boost its oil output to reverse production declines.

Shares were down 2.3% to $63.30 in premarket trading. The stock is down about 29% since Chief Executive Darren Woods took over three years ago.

Its production in the Permian Basin, the largest U.S. shale field, was up 54% from a year ago. But quarterly profits on U.S. production were down 74% as the company spent heavily to boost output and suffered from lower prices.

Overall, the exploration and production business, its largest, benefited the most from the sale of production assets in Norway for $4.5 billion to Vår Energi AS.

Analysts said the weakness across its businesses means Exxon will still have to borrow to cover its shareholder dividend. Investors have been pushing oil companies to improve their returns by increasing dividends or share buybacks. Exxon has frozen its share repurchases except for offsetting dilution for employee awards.

“Unlike its peers, the company is not generating free cash flow given its large capital spending program,” said Jennifer Rowland, analyst with Edward Jones.

Exxon’s $355 million loss in chemicals mirrors that of rival Royal Dutch Shell (LON:), and was the first loss in that business in at least 13 years, said Biraj Borkhataria, analyst with RBC Capital Markets, adding “we do not expect a significant recovery,” in 2020.

Its refining business earned $898 million, down 67% from last year, on lower margins.

Excluding one-time items, per share earnings were 41 cents, below Wall Streets consensus expectation of 43 cents, according to Refinitiv. Analysts earlier this month had slashed estimates from 71 cents after the company warned of weakness in chemicals and refining.

The largest U.S. oil producer’s oil and gas output rose less than 1% to 4.02 million barrels per day in the quarter, the sixth quarter in a row of year-over year gains.

Earlier this week, the company raised its Guyana oil estimates by 2 billion barrels, bringing total recoverable oil and gas resources from the discovery to more than 8 billion barrels.