Did the VIX just flash a contrarian buy signal? I’m referring, of course, to the CBOE’s well-known volatility index. VIX, +2.43%   Considered by many to be the U.S. stock market’s “fear index,” the VIX is widely interpreted in a contrarian way: High levels indicate widespread fear, and therefore thought to be a positive sign — while low levels indicate widespread complacency, which is negative.

That’s why contrarians began to take notice in late February when, in the wake of the stock market’s plunge, the VIX soared to near 50. That’s the highest it’s been since 2011, and higher than almost 99% of all daily readings over the past three decades.

Unfortunately, this contrarian interpretation of the VIX leaves much to be desired. The stock market has produced higher returns, on average, when the VIX has been low than when it has been high.

This is illustrated in the chart below, which reflects what I found upon dividing all days since 2000 into two equal-sized groups: The first contained all days in which the VIX was below its median, and the second contained the 50% of days with above-median readings. On average, as you can see, the Wilshire 5000 index performed better in the wake of below-median VIX readings than subsequent to above-median readings. 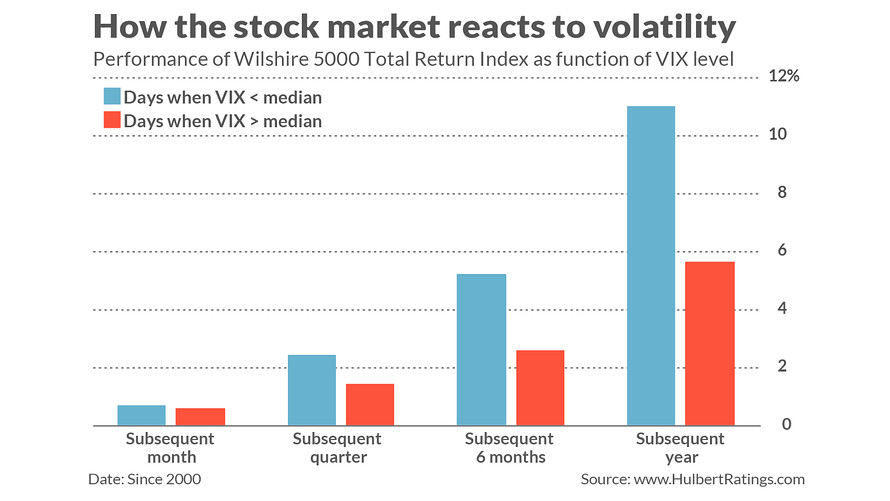 This makes sense. While it’s true that the highest VIX readings are followed by strong market gains, it’s also the case that during the days and weeks preceding those VIX highs the market performs terribly. To celebrate the strong gains following those VIX peaks is to focus on only half of the story. It’s as if a mountain climber considered only how easy it is to climb down from the peak, while conveniently forgetting the effort required to climb up.

This has been abundantly illustrated by the market’s recent behavior. As recently as mid-February, the VIX was trading below 14, putting it in the 25th percentile of all daily readings since 1990. Even if the current VIX reading near 50 marks the high during this decline, we can’t overlook the almost 15% decline in the S&P 500 SPX, -0.82%  that took place while the VIX more than tripled to get to near 50.

Furthermore, we can’t know until after the fact how high the VIX will go before it peaks, which is another way of saying we can’t know how far the market will drop before it starts to rally. Prior to the Great Financial Crisis, for example, the VIX’s all-time high had been 45.74. So when the VIX rose to that level in September 2008, contrarian followers of the VIX considered it to be a buy signal. As fate would have it, however, the VIX didn’t finally hit its peak until it was near 90 in late October 2008, or almost double the previous all-time high. The bear market didn’t finally come to an end until the subsequent March.

Not all is lost when interpreting the VIX, however. That’s because there are ways of slicing and dicing the data to get greater insight than is afforded by focusing on the index itself.

The particular way of viewing the VIX that has shown promise is known as “purification.” It was devised by David Aronson, author of Evidence-Based Technical Analysis and co-author (with Dr. Timothy Masters) of Statistically Sound Machine Learning for Algorithmic Trading of Financial Instruments. The general idea is to see if the VIX at any given time is higher or lower than you’d otherwise expect, given the market’s recent behavior.

It’s that unexpected portion of the VIX that tells you whether there is excessive optimism or pessimism. It might be, for example, that the market has fallen far and fast enough, and/or been volatile enough, that you’d expect the VIX to jump to high levels. In that case, per Aronson’s research, you wouldn’t ascribe any particular contrarian significance to the high VIX level.

What story is the “purified” VIX telling us now? In an email after the close on Feb. 27, Aronson said that this modified VIX is indicating that there is excessive pessimism and fear right now, and therefore “a market bottom is… very near.”

More: What it means that the S&P 500’s yield is now so much higher than the Treasury’s 10-year yield

Also read: Stocks’ plunge through a key support level could set up a quick market rebound