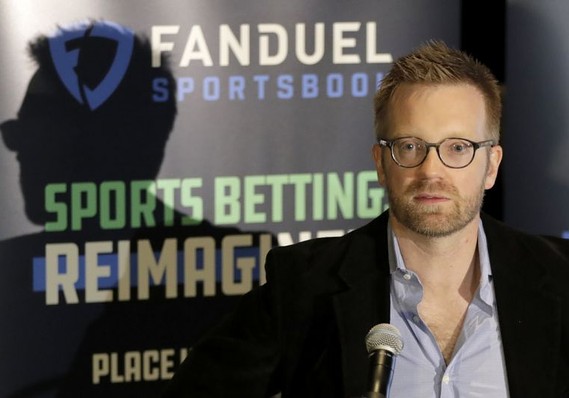 MIAMI — FanDuel CEO Matt King has lived in New York for so long that he “forgot what the sun looked like,” but he got a reminder during his trip to watch Super Bowl 54 in Miami, where 72 and sunny is considered chilly.

King has been CEO of the New York-based bookmaker and daily fantasy sports site since 2017. He was in Miami to watch the Kansas City Chiefs and San Francisco 49ers square off, but he was also here to spread FanDuel’s love of sports betting.

In an interview with MarketWatch, King weighed in on the DraftKings “Bachelor” controversy, Barstool Sports, and why he doesn’t care if FanDuel loses money on the Super Bowl.

MarketWatch: What are some of the goals that you have for Super Bowl week?

King: The biggest thing for Super Bowl weekend is less about what happens here in Miami and more about the experience our players have all over the country. We are looking to deliver the best Super Bowl experience for everybody at home. For New Jersey, this will be the second year of the Super Bowl with legalized sports betting, and for states like Indiana and Pennsylvania, it’ll be the first one.

King: Hopefully there will be legalized sports betting in Florida by then, but who knows? The experience of the in-state sports fan once legalized sports betting happens really is transformational. You see retail sportsbooks open, like our sportsbook at the Meadowlands. What you’ll see there is an incredible energy which is unlike anything that exists in Vegas. It also allows us to bring a better mobile app experience — 85-90% of the bets that are taken are done online.

MarketWatch: If I were to ask the NFL a similar question about legalized betting, do you think they would be as excited about it as you are?

King: I think they would be as excited. I would be interested to hear their answer but you can see that the NFL has a growing acceptance of it. Sports betting is happening today, and it’s important to put the illegal market out of business. Maybe not next year, but I think over time our views about how this is good for sports fans would sound similar to how the NFL would think.

See also: Barstool Sports CEO: ‘We are a company that thrives on drama’

MarketWatch: People generally think that Super Bowls are good for the sportsbooks due to sheer volume of bets. Based on the teams involved, the ratings of the season, is there any reason to think the books won’t do well on Sunday?

King: I think we are going to do very well. What I will say though, is that there are Super Bowls where people lose money. Last year we lost money because most people wanted to take the Patriots and regardless of where we set the line, if the Patriots are going to win, and most of the money is on the Patriots, then we are going to lose and that’s okay. We look at the Super Bowl less about making money, and more about creating a great experience.

Over time we will generate the economics we have to.

MarketWatch: That’s interesting that you take that approach. You’re saying you care more about the experience than the day’s profits. That’s like the approach of a tech company.

King: I think that’s probably a fair statement. If at the end of the day we are creating great experiences and giving sports fans a chance to win, then people will keep coming back and keep playing. Over time we will generate the economics we have to.

MarketWatch: Is that because you are mostly focused on user growth and user loyalty?

King: It’s a recognition that I am in the risk business. Our models try to figure out who is going to win a game, but any team can win on any given day. But over a long period of time it will work out. If you put it in investing parlance, Warren Buffett has that saying, ‘I would rather have a lumpy 15% than a smooth 12%.’

MarketWatch: Are you seeing growth in people betting on the Super Bowl year-over-year?

King: We are seeing tremendous growth. A lot of the money bet on the Super Bowl is bet in the few days leading up to the game, and for us almost half of our money comes in the form of live-bets.

MarketWatch: I’m sure you’ve heard about the Draftkings controversy with the “Bachelor” contestant Jade Tolbert having to essentially forfeit $1 million.

MarketWatch: What were your thoughts on that?

MarketWatch: How are you preventing things like that from happening to FanDuel?

King: We have a Know Your Customer (KYC) process ensuring that everybody is who they say they are when they sign up. We monitor locations, IP addresses and device IDs in addition to an algorithm that detects suspicious behavior.

MarketWatch: Has FanDuel ever had to reverse a contest winner like DraftKings did in the past?

King: Not to this point, knock on wood.

MarketWatch: You guys are very familiar with Barstool Sports — what was your reaction to their new deal with Penn National Gaming?

King: In many ways, that deal was a validation of our strategy. From Penn’s perspective, a big reason for the deal was to have a brand that resonated with millennial sports fans. That’s something that we already have.

MarketWatch: Were there ever any talks over the years to do a similar deal with Barstool?

King: I’m not going to comment on discussions that may, or may not have occurred.

MarketWatch: Any problems you seeing for FanDuel in the next few years?

King: The biggest thing we are trying to attack is the illegal betting market. Even in states with a competitive mobile marketplace, there’s still a lot of consumer perception that all sportsbooks are legal. We have to get people to understand who the legal and illegal operators are.

MarketWatch: Do we even know how big the illegal betting market is?

King: Market estimates are anywhere from $150 billion to $450 billion in handle. I would take the over on that, but it’s hard to get a precise number. But you can see from the data that the legal market is gaining share.