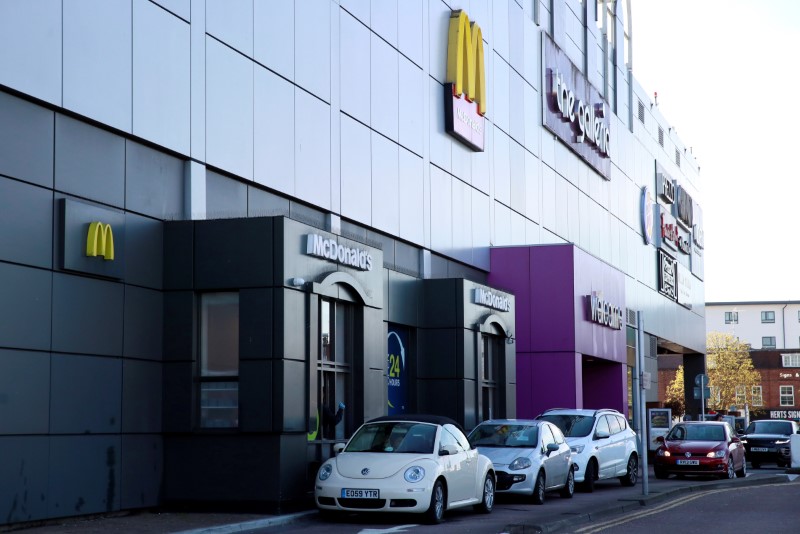 McDonald’s Corp (NYSE:MCD), Yum! Brands Inc (NYSE:YUM)’s KFC fried chicken chain, Coca-Cola (NYSE:KO) Co unit Costa Coffee and Subway sandwich shops were among restaurants that shuttered all locations in the United Kingdom and Ireland by the end of Monday to help slow the spread of the coronavirus.

The breadth of the closure ordered by Prime Minister Boris Johnson on Friday reflects rising global urgency over the severity of actions needed to stop the virus. McDonald’s, which had shut its dining rooms, extended closures to include take-out and drive-thrus, which have been spared so far in the United States.

In Britain, customers formed long queues in their cars, snaking around corners as they waited to get a last Big Mac from McDonald’s drive-thrus before closings on Monday.

People shared pictures of their last McDonald’s meals on Twitter, with one user in Glasgow saying she had sworn to eat healthier but “decided to have one last one for a while.” Her picture show a Quarter Pounder with Cheese, fries and a drink.

McDonald’s said that executives in each of its 119 markets are monitoring local conditions in their countries and making decisions about how to operate as the coronavirus prompts widespread closures globally.

“Decisions on restaurant operations are made at the market level based on the unique situations in those communities,” it said in a statement to Reuters, declining further comment.

During systemwide calls with its more than 1,600 U.S. franchisees, McDonald’s executives said closing stores would be a last resort, according to a person who participated in the calls.

The corporate executives said they do not want franchisees to go out of business, that “no owner will be lost” as a result of the deadly outbreak, the person said.

The company did not immediately reply to a request for comment.

To be sure, some restaurant are scaling up instead of down. Papa Johns International Inc said on Monday that it will hire 20,000 workers as U.S. customers order pizza delivery – now with “zero contact” between driver and customer – while isolating themselves at home.

Starbucks Corp (NASDAQ:SBUX) has also reopened most of its locations in China, where the deadly outbreak began.

On March 16, McDonald’s closed dining rooms in its corporate-owned U.S. stores – which make up 5% of its approximately 14,000 locations – allowing only drive-thru, delivery and take-out orders.

“That’s just not an easy shutdown,” he said.

By comparison, the United Kingdom and Ireland have only about 1,270 locations.