Home
Market
For airlines, China boom now exposes them to risk as coronavirus slams market
Prev Article Next Article
This post was originally published on this sitehttps://i-invdn-com.akamaized.net/trkd-images/LYNXMPEG0S0I2_L.jpg 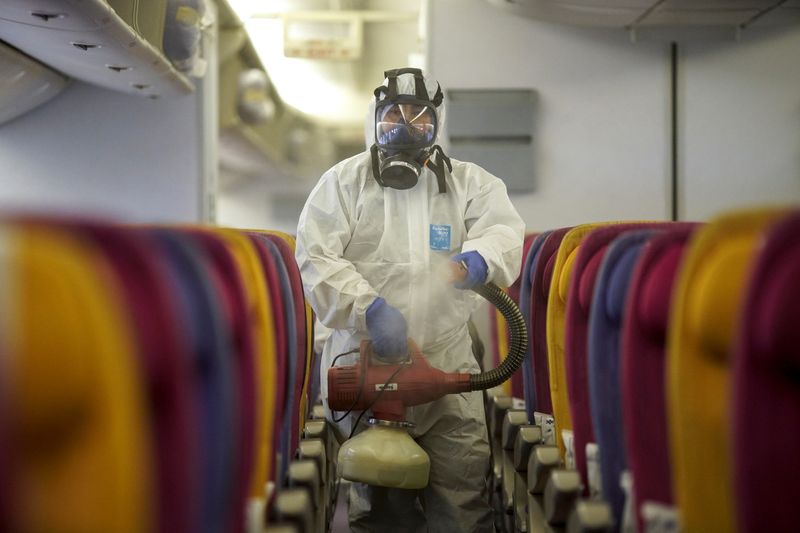 By Jamie Freed and Tracy Rucinski

SYDNEY/CHICAGO (Reuters) – China’s growth has helped power a global aviation boom over the last decade, but as the country curtails travel in the face of a new coronavirus, a slowdown could hit the industry harder than ever before.

United Airlines Holdings Inc (O:), Air Canada (TO:) (TO:), Cathay Pacific Airways Ltd (HK:) and Finnair Plc (HE:) are among the carriers that have already canceled some flights to China as countries expand travel warnings and demand plummets due to the coronavirus outbreak.

British Airways (L:) has halted bookings of direct flights from London to Beijing and Shanghai until March, according to its website.

The virus that has killed more than 130 people and sickened more than 6,000, the vast majority of whom are in China.

U.S. officials said the White House had decided against suspending all flights there for now, but was still considering the measure.

The virus appears to represent the biggest epidemic threat to the airline industry since the SARS outbreak, which at its peak in April 2003 led to a 45% plunge in passenger demand in Asia, analysts said.

The global airline industry has been profitable for the last 10 years, according to the International Air Transport Association (IATA). Airlines are in a stronger financial position than in 2003, but also far more dependent on China.

Margins at many carriers remain narrow, economic growth has been fragile amid a U.S.-China trade war and there are fears that the return of the 737 MAX, expected mid-year, could lead to overcapacity and push down fares. Airbus and Boeing orders have fallen from the peak levels of 2013 and 2014.

The epidemic is particularly concerning to the industry because China is the world’s biggest outbound international travel market and the second-largest domestic aviation market.

The country accounts for about 25% of global sales for airplane manufacturers Airbus SE (PA:) and Boeing Co (N:). About 450 million more passengers fly to, from and within China per year compared with a decade ago, according to the IATA.

For Chinese airlines, the biggest of which are state-backed, the impact of the new coronavirus has been swift. On Wednesday, 23% of departures from Shanghai Hongqiao airport had been canceled, according to FlightRadar24, compared with 8% at the more internationally focused Shanghai Pudong airport.

Mike Boyd, head of U.S.-based aviation consultancy Boyd Group International, said that he had forecast airport traffic in China to rise 8.1% in 2020, but that he now sees traffic growing at less than half that rate.

Cathay Pacific, already battered by a fall in demand because of anti-government protests in its home market of Hong Kong, said on Tuesday evening it would cut flights to mainland China by 50% or more through the end of March.

The fate of Cathay and local rival Hong Kong Airlines could depend on the willingness of travelers to transit through Hong Kong airport, BOCOM International analyst Luya You said. The protests had already caused a collapse in demand from mainland tourists and business travelers, she said.

Asian jet fuel prices have dropped and refiners’ profits for the product have slumped to their lowest in more than 2-1/2 years over concerns that the coronavirus will hurt demand, although that will also help unhedged carriers keep a lid on costs.

U.S. and European carriers have less relative exposure to the Chinese market than their Asian rivals. Chinese carriers, which have a huge home market, dominate airline travel between China and long-haul destinations. But they were racking up international losses even before the virus broke out.

Flights to China account for 2%-6% of estimated revenue at United Airlines, Delta Air Lines Inc (N:), American Airlines Group Inc (O:) and Air Canada, according to analysts at Cowen, an independent investment bank, although they added there were concerns the virus would not be contained in China given how it was spreading.

Historically, air traffic has returned to normal after health scares. In the case of SARS, it took nine months to recover, according to IATA.

“It (SARS) meant we did cut back on some international capacity but it rebounded very fast,” Qantas Airways Ltd (AX:) Chief Executive Alan Joyce told reporters on Wednesday, saying that earnings took a A$55 million ($37.61 million) hit from that epidemic.

“We do now have a lot of experience over the years with MERS, with Zika virus, with volcanoes, with all sorts of activity that’s impacted the airlines,” he said.