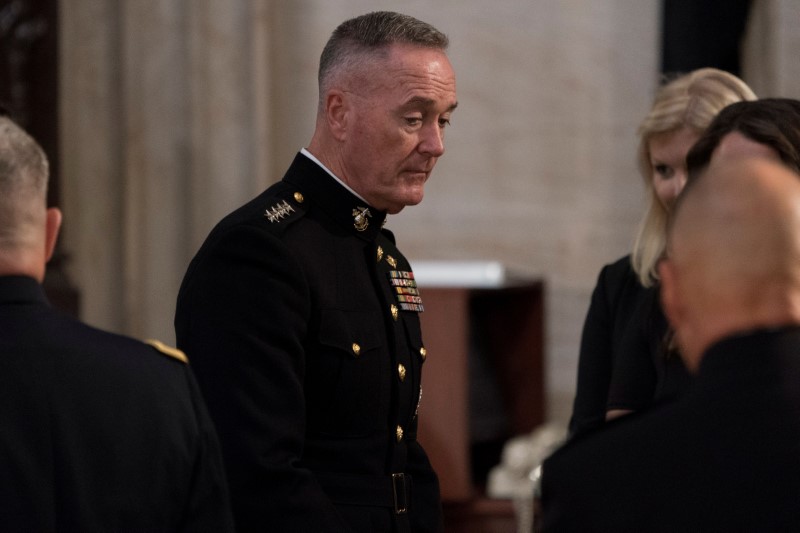 WASHINGTON (Reuters) – The former top U.S. military official, General Joseph Dunford, has been elected to the board of Lockheed Martin Corp (N:), the Pentagon’s largest weapons supplier, the company said on Friday.

Dunford, who served as Chairman of the Joint Chiefs of Staff from 2015 to 2019, will join the board of the F-35 fighter jet maker on Feb. 10. He left the Pentagon last year.

Critics of U.S. military spending have long complained of a revolving door between Pentagon leadership and the defense industry. Secretary of Defense Mark Esper was a lobbyist for missile maker Raytheon (N:) before taking the job last year and his predecessor Patrick Shanahan was an executive at Boeing (N:).

“His experience in complex, global operations and risk management, including cybersecurity threats, is a tremendous asset and will enhance board oversight in key business areas,” Marillyn Hewson, chairman, president and CEO of Lockheed Martin said in a statement.

Before serving as principal military adviser to the president, secretary of defense, and U.S. National Security Council starting in 2015, Dunford was the commandant of the Marine Corps.

Dunford commanded the 5th Marine Regiment during Operation Iraqi Freedom and had also served as the commander of all U.S. and NATO forces in Afghanistan.

Lockheed, based in Bethesda, Maryland, will expand its board to 12 members in order to include Dunford. It can increase its board to up to 14 members according to the company’s bylaws.

The former top officer will serve on the company’s classified business and security committee as well as corporate governance.

Dunford, a Marine, has a master’s degree in government from Georgetown University and in international relations from the Fletcher School of Law and Diplomacy.

Former energy executive Debra Reed-Klages joined Lockheed’s board in November. The company is due to announce its fourth quarter and year end financial results on Tuesday.