Home
Market
'Frost on top of snowfall': Virus piles pressure on China's industrial machine
Prev Article Next Article
This post was originally published on this sitehttps://i-invdn-com.akamaized.net/trkd-images/LYNXMPEG0U0RS_L.jpg 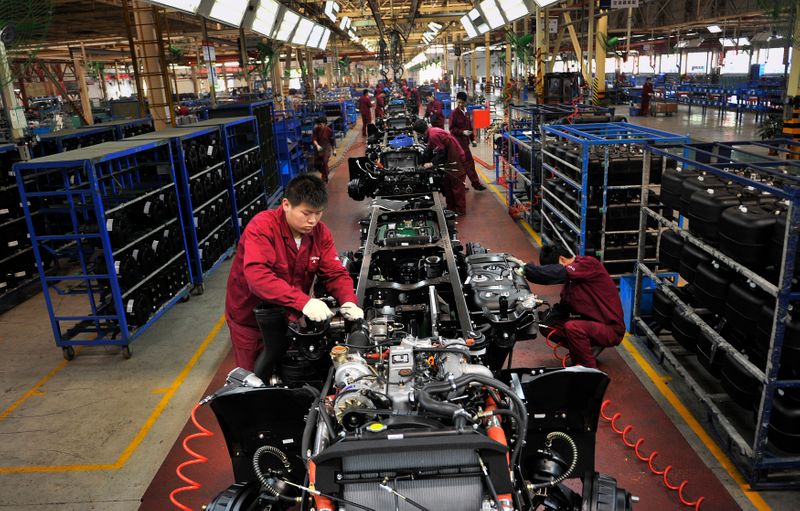 By Josh Horwitz and Muyu Xu

SHANGHAI/BEIJING (Reuters) – The coronavirus is threatening to disrupt large parts of China’s manufacturing machine and its global supply chains as the spread of infection and strict public health measures force companies and workers to remain idle.

China’s most important holiday was due to end on Friday, when many companies planned to get back to work after a week-long vacation, but authorities have ordered businesses in many areas to stay shut longer in a bid to contain the disease.

Widespread travel restrictions, meanwhile, mean millions of migrant workers may be unable to return to what has often been called the world’s factory floor.

The World Health Organization on Thursday declared the outbreak a global health emergency as the death toll in China reached more than 200, with over 9,000 infected.

Brian Miller, 32, owner of Easy China Warehouse and a bluetooth speaker company in the southern city of Shenzhen, said labor and production disruptions could ripple through supply chains, from raw materials to final assembly.

“If we can’t get back to production quick enough, I’ll run out of inventory, and I’ll have a few months where we won’t be able to sell anything. And that’s the catastrophe that we all don’t want,” Miller told Reuters.

In Eastern China’s Suzhou, one of the country’s largest manufacturing hubs, companies have been told to stay shut until at least Feb. 8 and in Shanghai until Feb. 9. Factories in the southern manufacturing hub of Dongguan in export-oriented Guangdong province have also been told not to open before Feb. 10.

The threat of significant disruptions comes as China was already undergoing the biggest supply chain shift in a generation as companies grappled with the impact of the Sino-U.S. trade war and an economic slowdown.

A woman surnamed Chen, who co-owns a garment factory in Huizhou in Guangdong province, described the virus and shutdowns as being like “frost on top of snowfall.”

Her domestic focused factory already had to lay off almost half its workers from over 70 to around 40 due to the slowing economy, and she fears more jobs may be lost in coming months.

“The outbreak is definitely causing great damage to our business, as everyone will worry about a resurgence in the virus even if it is curbed,” she said.

The risk of a shock to business and consumer activity prompted one Chinese government economist to forecast economic growth may drop to 5%, or lower, from 6.1% in 2019. During the SARS epidemic in 2002-03, growth fell two percentage points but rebounded quickly once that outbreak was brought under control.

“The worst thing is the uncertainty … Whole parts of the supply chain could stop,” said Nicole Peng, vice president of mobility at Canalys, an IT research firm.

Extended closures are rippling across China.

Coal mines in Inner Mongolia and Shanxi, the top two coal producing areas, have been told not to resume full-scale production until at least Feb. 9, though some workers believe the shutdown could last longer.

A liquefied gas trader in Tangshan in northeast Hebei province said truck drivers were due back on Thursday, but none had returned.

While some steel mills in Hebei, China’s top steelmaking hub, were still operating due to the hefty cost of shutting and restarting, some workers were advised to stay home until Feb. 9, as “no one wants to take the risk,” a purchasing manager at a mid-sized mill said.

A growing number of multinational companies have warned of a hit to their businesses, with firms such as Starbucks Corp (O:) and Levi Strauss (N:) shutting many China stores.

Scores of airlines have also suspended or reduced flights to China, which Miller said could disrupt air freight.

Some industry veterans said the virus could be the last straw for companies doing business in China. Labor and operating costs had already been steadily rising before the trade war brought higher tariffs.

“You don’t know how many (workers) are going to come back and you don’t know how many of the suppliers in your supply chain are affected,” said Larry Sloven, president of Capstone International HK Ltd, who has been doing business in China for more than three decades supplying big-box U.S. retailers.