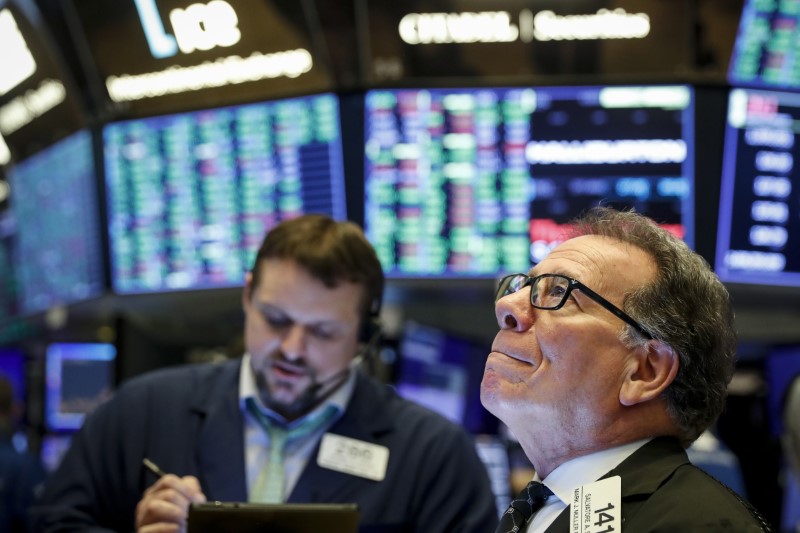 © Reuters. Traders work on the floor of the NYSE in New York

(Reuters) – U.S. stock index futures tumbled on Monday on rising estimates of the economic damage from the coronavirus pandemic, with Goldman Sachs (NYSE:) estimating a 24% plunge in U.S. real GDP in the second quarter.

Such a drop would be two-and-a-half times as large as the previous post-war record and would contribute to a 1% contraction in global GDP in 2020, Goldman Sachs said.

Fears about the extent of the coronavirus-related hit to Corporate America have erased more than $9 trillion from the S&P 500 () since its record high last month, with U.S. stock indexes ending Friday with their worst week since the global financial crisis.

Adding to the pessimism, a $1-trillion-plus coronavirus response bill failed to get through the first procedural hurdle in the U.S. Senate on Sunday night, raising further questions about the White House’s ability to effectively halt the spread of the outbreak.

Nearly one in three Americans have now been ordered to stay home, foreshadowing a further dent to economic activity. Starting Monday, the New York Stock Exchange will fully shift to electronic trading.

With companies announcing layoffs and new problems raising debt, markets have ignored most macroeconomic figures. But U.S. weekly jobless figures, due on Thursday, are expected to show as many as 750,000 new claims.

Boeing (N:) shareholders received an unusual piece of good news late on Sunday with Goldman Sachs upgrading its rating on the planemaker to “buy”, expecting the company to recover from its recent woes. Its shares have fallen 70% since Feb.1.