Home
Market
Global shares head for worst week since 2008 financial crisis
Prev Article Next Article
This post was originally published on this sitehttps://i-invdn-com.akamaized.net/trkd-images/LYNXNPEG1R002_L.jpg 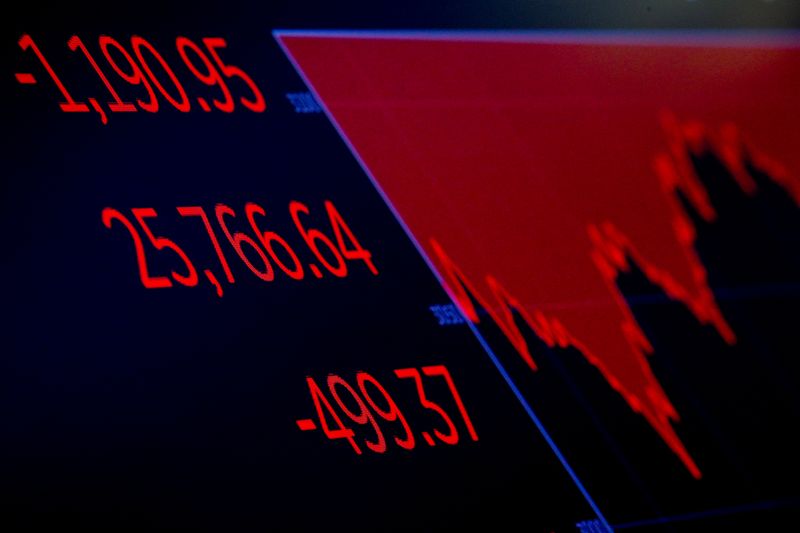 © Reuters. A screen shows the Dow Jones Industrial Average after the close of trading on the floor at the NYSE in New York

TOKYO (Reuters) – Global share markets headed for the worst week since the darkest days of the financial crisis in 2008 as investors braced for the coronavirus to morph into a pandemic and derail world economic growth.

Hopes that the epidemic that started in China would be over in a few months and economic activity would return to normal have been shattered, as new infections reported around the world now surpass those in China.

The worsening global threat from the virus prompted investors to rapidly step up bets the U.S. Federal Reserve would need to cut interest rates as soon as next month to support economic growth.

“We don’t even need to wait for economic data to see how badly the economy is being hit. You can tell that the sales of airlines and hotels are already falling by a half or something like that,” said Tomoaki Shishido, senior economist at Nomura Securities.

“It is fair to say the impact of the coronavirus will be clearly much bigger than the U.S.-China trade war. So the Fed does not have a reason to take a wait-and-see stance next month,” he said.

MSCI all country world index () fell 3.3% on Thursday to bring its losses so far this week to 8.9%, on course for its biggest weekly decline since a 9.8% plunge in November 2008.

It has lost 12% since hitting a record close on Feb. 19, marking its fastest correction ever in just six trading days while the Dow Jones Industrial Average () fell 1,190.95 points, its biggest points drop ever.

In Asia, MSCI’s regional index excluding Japan () lost 0.6%. Japan’s Nikkei () gave up 2.5% on rising fears the Olympics planned in July-August may be called off due to the coronavirus.

“The coronavirus now looks like a pandemic. Markets can cope even if there is big risk as long as we can see the end of the tunnel,” said Norihiro Fujito, chief investment strategist at Mitsubishi UFJ Morgan Stanley (NYSE:) Securities. “But at the moment, no one can tell how long this will last and how severe it will get.”

The World Health Organization (WHO) said all countries need to prepare to combat the virus as the outbreak spread to major developed economies such as Germany and France.

Fears of a major economic slump sent oil prices to their lowest level in more than a year. U.S. crude futures () fell to $46.28 per barrel.

As investors flocked to the safety of high-grade bonds, U.S. bond yields have plunged, with the benchmark 10-year notes yield hitting a record low of 1.241%. It last stood at 1.274% ().

That is well below the three-month bill yield of 1.439% (), deepening the so-called inversion of the yield curve. Historically an inverted yield curve is one of the most reliable leading indicators of a U.S. recession.

Expectations the Fed will cut interest rates to cushion the blow are rising in money markets, with Fed funds futures <0#FF:> now pricing in a good chance of a move as early as next month.

The euro stood at $1.1005 (), having jumped over 1% in the previous session, the biggest gain in more than two years as investors wound back bets against the currency versus the dollar.