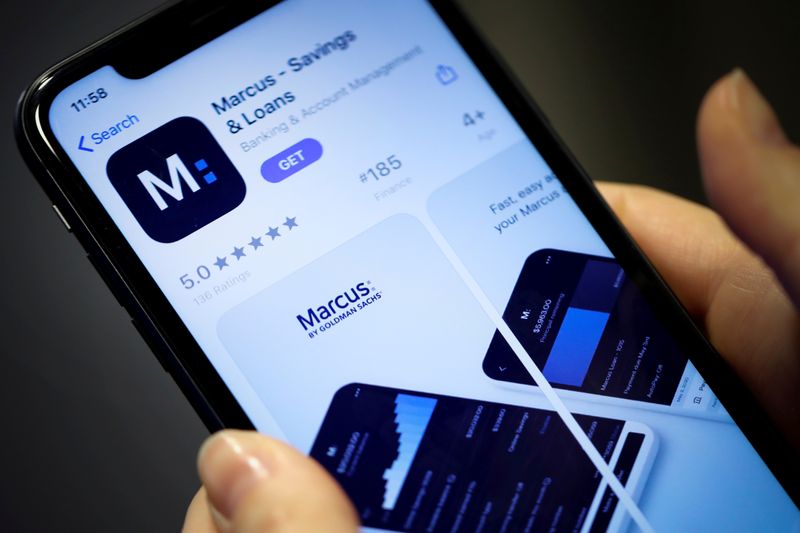 By Lawrence White and Iain Withers

LONDON (Reuters) – Goldman Sachs (N:) plans to expand its retail brand Marcus in Britain this year with more than 65 new staff, a mobile app and more savings products, as part of the group’s global shift towards consumer banking.

Since its British launch in 2018 Marcus has gobbled up some 13 billion pounds ($16.8 billion) in savings from competitors, by initially offering a market-leading interest rate of 1.5%.

The new hires will be across Marcus’s London office and at its call center in Milton Keynes, north of London, taking the unit’s total headcount to over 300 by the end of this year, from 235 now, Marcus UK’s head Des McDaid told Reuters.

“You need a proposition that makes sense and can reach scale, we hope to start looking into that in the second half of the year,” he said.

McDaid said Germany would be the next logical market for Marcus to enter, but that there are no immediate plans to make that move.

Goldman Sachs will launch joint accounts this week, easy access Individual Savings Accounts in the second quarter and its Marcus app by the end of the year, McDaid said.

The U.S. lender has already launched the app in its home market.

Goldman’s push in Britain comes as part of one of the biggest strategic shifts in the U.S. bank’s 151-year history, announced on Jan. 29, as it cuts back in its traditional strengths of trading in favor of consumer banking.

The British unit accounted for over a third of Marcus’s growth last year, as it grew deposits to $60 billion.

McDaid said the bank is looking to fill all of the 250-staff capacity at its Milton Keynes customer support center and could then look to open a second such unit in Britain in the longer term.

The lender is also looking to establish a technology center in either the midlands city of Birmingham or further north in Manchester, he said.

Goldman has announced plans to launch Marcus current accounts by 2021 in the United States, but McDaid said the lender is focused for now on its savings products in Britain.

The current account, or checking, market in British banking is notoriously hard to make profitable on a standalone basis, with customers reluctant to pay for basic accounts and entrenched incumbents like Lloyds (L:) and Royal Bank of Scotland (L:) dominating the market.

It has since cut it to 1.35%, tempering its growth as it passed the halfway point to the regulatory limit on deposits of 25 billion pounds. Above that level, Goldman would have to ringfence Marcus deposits from its riskier trading arm.