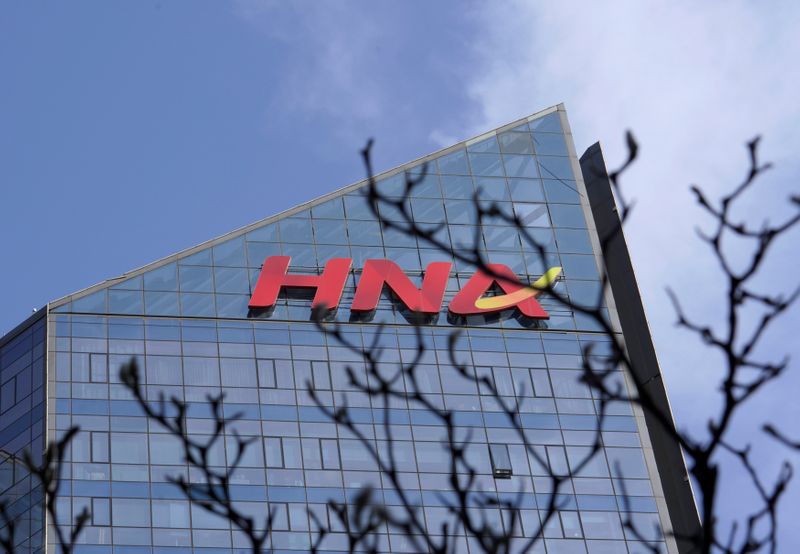 BEIJING/SHANGHAI (Reuters) – Shares in HNA Group-controlled companies rose on Monday after the Chinese aviation and tourism conglomerate said it had asked the government to help it resolve liquidity risk caused by the coronavirus outbreak which has put heavy pressure on the airline industry.

HNA directly owns or holds stakes in a number of local Chinese carriers, which have suffered in recent weeks from widespread flight cancellations and plummeting demand.

HNA Group said on Saturday it had asked the Hainan provincial government to lead a working group as it was not able to deal with the liquidity risk itself.

The group had acknowledged liquidity issues before the coronavirus outbreak started. In December, Chairman Chen Feng said HNA had faced cash flow shortage that forced it to delay salary payments.

Its Saturday announcement has driven heavy discussion in China on whether there will be a carving up of its assets.

Two weeks ago, HNA-related shares likewise rose on a media report that said China’s government planned to take over the debt-laden conglomerate.

“The implementation of a government acquisition would be challenging as HNA’s structure is complex,” Warut Promboon, head of credit research at Bondcritic, said on Monday. “Overall, it is credit positive. HNA has grown too fast and is too big that it needs to be broken down. The restructuring will be best under the state support.”

It began selling many of its purchases two years ago to focus on its airlines and tourism businesses, after its massive spending drew scrutiny from China’s central government and other overseas regulators.

Analysts said issues that have affected Hainan Airlines and other HNA subsidiaries largely persist and questioned the extent to which local government involvement will help them toward leaner books and stable profit.

On the up side, there could be opportunity to streamline and gain market share as the industry recovers from the virus fallout, said transportation analyst Luya You at BOCOM International.

Data from Cirium showed the number of flights to, from and within China canceled or removed from schedules totaled 347,414 from Jan. 24 through Feb. 27.

Airlines have taken various cost-cutting measures to help alleviate pressure while the aviation regulator said it has asked the central government to introduce more subsidies for the industry.

“The coronavirus effects have hit the aviation market quite severely and will likely reshape the landscape for the latter half of 2020,” You said.