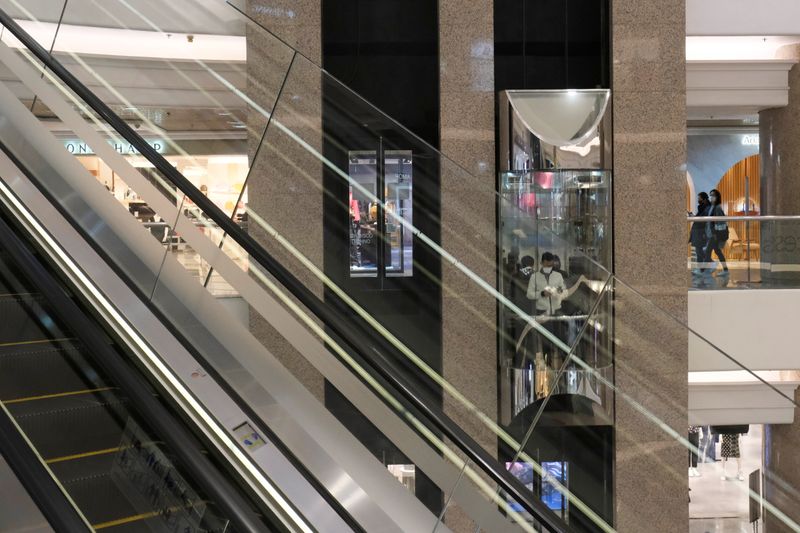 HONG KONG (Reuters) – Retailers in Hong Kong have launched themselves into a rare battle with the city’s notoriously unflinching landlords for deeper and longer-term rental cuts, as they reel from the double whammy of the coronavirus epidemic and months of political unrest.

Given the pressures, retailers are pushing to temporarily lower their rents in leases that are structured around a minimum fixed charge called base rent, or a percentage of store sales known as turnover rent, whichever is the higher amount.

Hong Kong’s economy contracted for the first time in a decade in 2019 after anti-government protests scared tourists away and emptied shops and restaurants. Now, many retailers fear the coronavirus crisis is threatening their survival.

The striking retailers want base rent to be waived and only turnover rent to be charged, as foot traffic has dropped dramatically in recent weeks. Commercial leases vary across sectors and locations but these retailers are mostly on terms that pay either base rent or a percentage of turnover.

Mall landlords — major property developers, such as Henderson Land (HK:) and Sun Hung Kai Properties (HK:) — have slashed February base rents and some have extended the cuts to March. But retailers say this is still too much to bear.

“A 50% reduction is obviously nice to have…but when you’re not taking in enough to cover salaries, our main interest is to look after our staff, and of course to look after the long-term viability of our business,” said Ashley Micklewright, president & CEO of Bluebell Group.

He said shifting to turnover rent would go a long way to solving retailers’ problems.

More brands will join a second strike, retailers told Reuters, with the aim to get landlords to charge just turnover rent until health measures such as the school suspension and a partial mainland China border closure are revoked.

Another group of retailers took out a full-page newspaper ad on Valentine’s Day, urging developers to exempt February rent and charge tenants turnover rent between March and June. Before the protests began in mid-2019, Hong Kong had the highest turnover per square foot in Asia.

But landlords are naturally resisting the proposal to charge turnover rent as retailers’ sales plummet.

Micklewright said his shops make 15% of normal turnover, while some peers made no sales at all for more than two weeks.

Many retailers have closed stores, cut staff and salaries to ride out the storm. Rental costs vary but can account for as much as half of a store’s sales in some cases.

Analysts say vacancy rates will rise this year, with Wharf REIC (HK:) and Hang Lung Properties (HK:) among the most affected due to heavier reliance on rental incomes.

Hysan Development (HK:), whose retail and office businesses each make up for 46% of revenues, said its mall turnover fell 20% on-year in January and that it will take measures to retain tenants.

Three developer sources told Reuters they are reviewing rents and have so far offered concessions mainly to small- and medium-sized businesses.

Some developers, however, are adamant they don’t need to help international brands.

“For the international big brands…it’s like a billionaire asking a millionaire for help,” said one developer representative, who did not want to be named as negotiations are private.

Louis Vuitton has agreed to renew its prime location lease in Times Square (NYSE:), after weeks of negotiation with the landlord, two sources told Reuters. The luxury brand was reported in early January to likely close the store due to high rent.

Times Square declined to comment while LVMH could not be immediately reached.

Prada and smaller shops have left nearby high-end Russell Street and new leases are expected to be 30-50% below the previous ones from three-to-five years ago, property consultancy Cushman & Wakefield told Reuters.

“There’s enough people in Hong Kong who have enough spending power to justify nearly all of the brands that we’re talking to maintain a presence here. The only reason that they would move out would be because rents are too high,” he said.