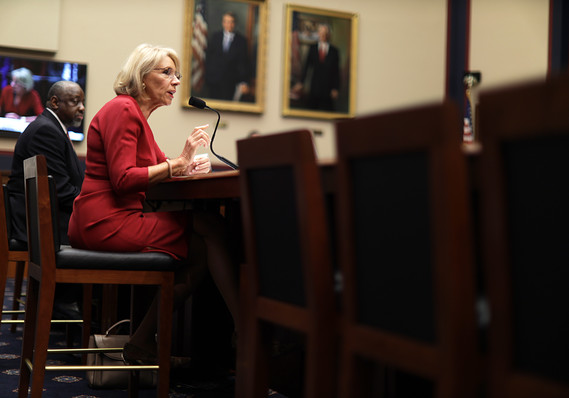 Secretary of Education Betsy DeVos at a December hearing on rules about loan relief for scammed students.

Federal lawmakers voted Thursday to block Education Department rules that would make it harder for scammed students to wipe away loans from shuttered schools.

The Democrat-controlled U.S. House of Representatives passed a measure that would halt rules slated for implementation in July and reinstate Obama administration-era regulations on how to deal with the debt loads of students with useless degrees.

The bill passed by a 231-180 vote, largely with Democrats in support of the legislation.

The vote centered on the “borrower defense to repayment” law, which lets defrauded students cancel their loans. The 1990s-era law caught renewed attention after the 2015 collapse of the for-profit Corinthian Colleges.

But critics say the law’s new regulations under Education Department Secretary Betsy DeVos would make it much tougher for borrowers to discharge their loans.

They already contend the DeVos-led department has granted far too few applications. As of last April, the number of approvals held steady at less than 50,000, even as pending applications grew. The DeVos department also allegedly forgives too few loans under a loan forgiveness program for teachers, nurses and other public sector workers, critics say, pointing at a 99% rejection rate.

“When you’re defrauded, you have a right to relief,” Rep. Susie Lee, a Democrat from Nevada, said in a press conference after Thursday’s vote. On Twitter TWTR, +2.95%  , Lee had said it was “almost impossible” for borrowers to get a discharge under the DeVos rules.

The bill to block the rules still has to pass the Republican-controlled Senate, and then get signed by President Donald Trump, which might be a tall order for the bill’s supporters.

After the vote, Education Department press secretary Angela Morabito defended the new rules. She said the new procedures had “clear and verifiable financial triggers designed to hold institutions accountable, and it applies to nonprofit and for-profit schools alike.”

She said the rule “corrects the overreach of the prior administration, gives students and borrowers the relief that they’re owed, and restores fairness and due process, saving taxpayers $11.1 billion over 10 years.”

While the fight continues on which rules will apply to the borrower defense law, there’s some good news from the IRS for borrowers who get a loan discharge.

Student loan cancellations can result in taxable income, but there are exceptions.

Until Wednesday, one of those exceptions was for former students who used the borrower defense rule to discharge loans from Corinthian Colleges, and the American Career Institutes, a for-profit school that closed in 2013.

Now, the IRS said students successfully using the borrower defense to wipe away debt from any school do not have to report the amount of the discharged loan in their income return.

“When the government discharges a federal loan because a student was defrauded, it is common sense that the student should not be taxed on the relief,” said Aaron Ament, the president of Student Defense, a nonprofit founded by former Obama-era Department of Education staffers.

“At least we now know that, if claims ever are granted, at the end of the day borrowers will not suffer large, and potentially debilitating, tax bills.”