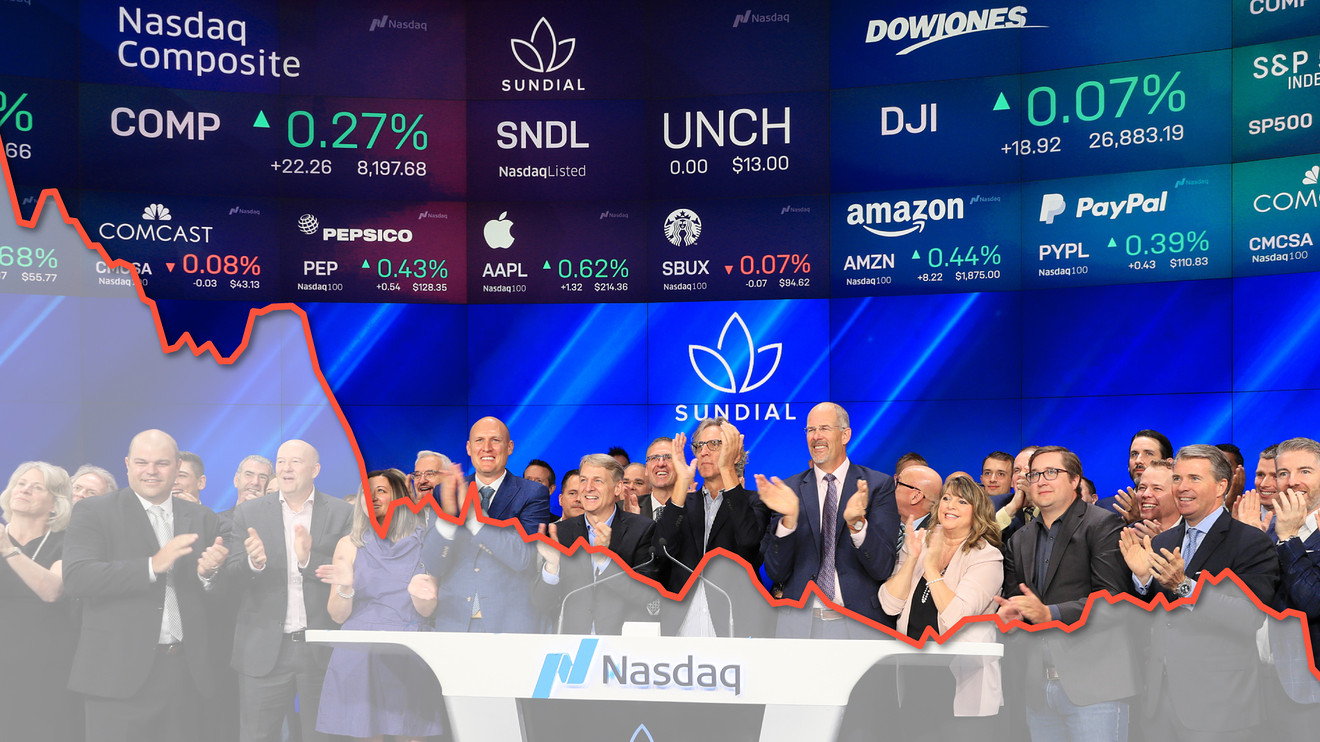 Chief Executive Torsten Kuenzlen and Chief Operating Officer Brian Harriman are both leaving the company, Sundial announced Thursday. Executive Chairman Ted Hellard — the main investor behind the rise of Sundial — will also be stepping down from his operational role. Zach George, currently a Sundial board member, will take over as CEO.

Sundial’s stock SNDL, +6.67% has plummeted 50% since the departures were announced, sending the company’s market cap to roughly $133 million at midday on Monday, a decline of roughly 87% from the valuation at the time of the IPO.

In a statement, Sundial said that it is “committed to implementing strong corporate governance practices throughout the organization” and that the board would continue to evaluate further “opportunities to strengthen the company.” A spokesman declined to comment on the reasons behind the moves.

“I felt the time was right to pass the torch to the next generation of great Sundial leaders,” Kuenzlen said in a separate statement.

The departures mark the latest twist for a company that has seen a reversal of fortune, much like the rest of the marijuana industry, which has seen a rocky start to Canada’s recreational cannabis experiment. Growing from a small greenhouse operator focused on vegetables into a Nasdaq-listed company that at one point had a billion-dollar market valuation, Sundial has suffered from a series of setbacks, including a layoff of roughly 10% of its workers in January.

Trouble at the company was most tangible at its flagship Olds, Alberta, facility, a site Kuenzlen said in 2018 would produce a premium product that could be sold at four times the going rate.

Several former Sundial employees have described difficulties at the Olds facility, telling MarketWatch the location had problems soon after it began to cultivate cannabis. Sundial has disclosed two fires at the facility, one of which resulted in the destruction of hundreds of thousands of dollars’ worth of cannabis, and former employees also described issues with moisture, mold and fungus.

The basement nursery was subject to frequent flooding — which sometimes included what seemed to be septic matter, according to one former employee.

In response to questions about fungus and mold, Kuenzlen said in a December email that all cannabis plants have “colony forming units” within them that include mold, and that Health Canada regulates acceptable levels. The company said its facilities are regularly inspected by the government agency to ensure compliance.

In addition, Kuenzlen said, “On occasion, water can drip from the ceiling-mounted dehumidifiers, but this is a rare occurrence. He acknowledged a “minor drainage backup” in April and said that even though the cannabis is grown on tables, the company destroyed all of the plants in the nursery and instituted changes to prevent such issues in the future.

A spokeswoman for the Alberta Ministry of Labour and Immigration said that the province has received four complaints from the Olds facility site since Jan. 1, 2018, and has issued three compliance orders for the grow facility. The most serious issue investigated by the authorities involved the hospitalization of more than a dozen employees. (Sundial said it was unaware of the official complaints.)

The hospitalizations relate to Sundial’s use of the isopropyl alcohol to remove labels from plastic bottles. According to a company document reviewed by MarketWatch, Sundial found that workers exposed to the chemical had sought medical attention — and, on Oct. 15, determined that the room was insufficiently ventilated. To address the problem, according to a company document reviewed by MarketWatch, Sundial rotated workers in and out of the room, but employees continued to seek medical attention. Emergency medical services personnel were called to the site and assessed 18 people on the scene who were complaining of headaches or lightheadedness, 14 of whom were transported to the Olds and Didsbury hospitals, according to Alberta Health Services.

A Sundial spokeswoman said in January that all the affected workers at its Olds facility returned to their regular duties, that production was not hampered, and that employee health and safety is a “key priority” and “core value” at the company, but “unfortunately events can occasionally occur.”

As MarketWatch previously reported, a shipment of a half-ton of the company’s cannabis was rejected by a customer in the second quarter because of poor quality, including visible mold and bits of debris such as rubber gloves.

In response to the shareholder lawsuit related to the product return Sundial said in a statement, “All of our customer agreements include provisions to replace or return product under certain conditions. The amount of product returned was a fraction of the 554 kilograms erroneously quoted in the article.”

Sundial executives requested that the shipment be returned during the third quarter, after the filing of the company’s IPO registration statement, according to a person familiar with the shipment. The company declined to comment on the timing of the shipment’s return. Separately, Sundial accelerated shipments of C$3 million to C$4 million of cannabis-related revenue so that it would be recorded in the second quarter, according to a person familiar with the matter.