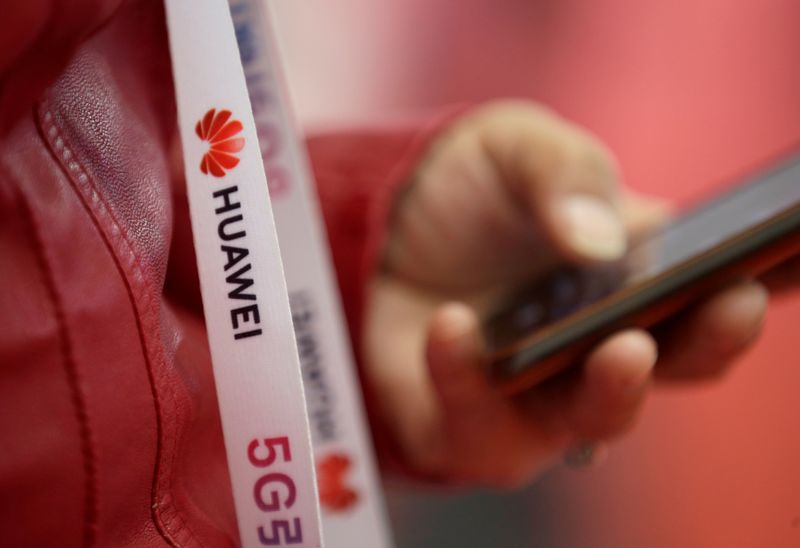 © Reuters. FILE PHOTO: An attendee wears a badge strip with the logo of Huawei and a sign for 5G at the World 5G Exhibition in Beijing

SHANGHAI (Reuters) – Some Chinese technology firms are continuing to manufacture parts and products despite government calls across various cities and provinces for work to be halted as Beijing seeks to stop the spread of the coronavirus ravaging the country.

Chinese telecom giant Huawei Technologies Co Ltd said on Monday it had resumed production of goods including consumer devices and carrier equipment, and operations are running normally. The company restarted manufacturing in line with a special exemption that allows certain critical industries to remain in operation, despite Beijing’s call to halt all work in some cities and provinces.

The spokesman said most of the production was in Dongguan, a city in the southern Guangdong province.

Other companies have also kept production running, in some cases even through Chinese New Year, in a sign of the critical importance Beijing places on its domestic tech supply chain, a subject of friction with the United States

Yangtze Memory Technologies Co Ltd (YMTC), a state-backed maker of flash memory chips based in Wuhan – the city where the virus outbreak originated – confirmed on Monday that it has not yet ceased production.

“At present, production and operations at YMTC are proceeding normally and in an orderly manner,” a company spokesman wrote in a statement on Monday.

The spokesman added that no factory employees have been confirmed as infection cases, and that the company has enacted certain isolation measures and partitions to ensure the safety of employees.

State media reported that the chip maker did not cease operations over the Lunar New Year holiday.

In a post on social media on Monday, the company said that it organized a work group before Chinese New Year to ensure the plants could stay open, while protecting the safety of employees and adhering to government regulations.

“SMIC needs to ensure that factory production runs 365 days a year and 24 hours a day to meet customers’ fabrication needs,” the post read.

(This story corrects spelling of Beijing in first paragraph)