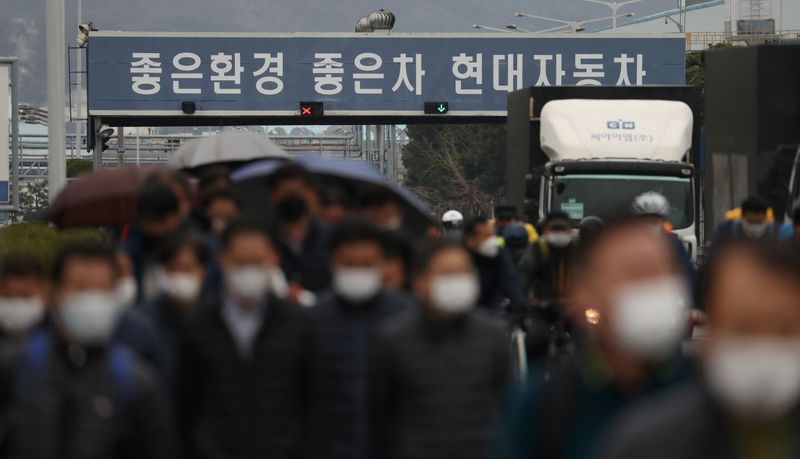 © Reuters. Employees wearing masks to prevent the coronavirus walk at a Hyundai Motors factory in Ulsan

SEOUL (Reuters) – Hyundai Motor (KS:) reported its lowest monthly global sales in a decade in February as the coronavirus outbreak hurt demand, in what is the first major indicator of damage to the broader auto sector from the epidemic.

It turned in a preliminary sales figure of 275,044 vehicles for the month, 13% below 315,820 vehicles sold a year earlier. Hyundai last reported sales lower than this in February 2010.

South Korea’s Hyundai, which with affiliate Kia Motors (KS:) is the world’s No.5 car maker, is the first major automaker to announce sales for the month. Chinese and U.S. players will turn in their numbers in the coming weeks.

The flu-like virus, which originated in China, has killed nearly 3,000 and roiled global financial markets as investors and policymakers brace for a steep knock to world growth.

South Korea has the most cases of infections outside the mainland, with the total at 4,212, affecting companies like Hyundai and Samsung Electronics (KS:).

“With sluggish consumption affecting demand on top of it all, means auto sales are certain to be hit in the first quarter, and the impact expected to continue until at least the beginning of the second quarter.”

Hyundai was the first major automaker to flag a hit to its manufacturing outside China when it halted production at home, its biggest manufacturing base, in February due to a shortage of parts from China.

While the automaker has gradually resumed output, virus-related uncertainties remain. Just last week, a worker at its factory complex in the southeastern South Korean city of Ulsan tested positive for the virus, prompting it to shut a factory.

The plant, which makes popular models such as the Palisade sport utility vehicle, resumed production on Monday, a Hyundai spokesman said.

South Korean coronavirus cases are concentrated in the fourth-largest city of Daegu and the North Gyeongsang province, home to about 20% of auto parts suppliers in the country, Statistics Korea data shows.