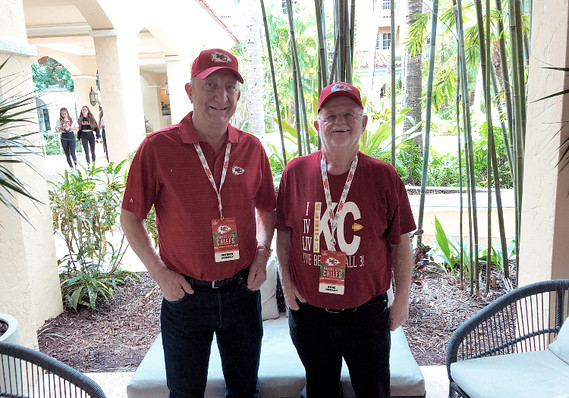 Kansas City Chiefs superfan Earl Freeman has been a season ticket holder for 52 years. He’s one of the only people on Earth who went to the last Chiefs Super Bowl in 1970 and who will also be in attendance for Super Bowl 54 between the Chiefs and the San Francisco 49ers.

Freeman was lucky enough to win a contest through the Chiefs organization that landed him and his partner tickets to the big game, as well as a private flight and hotel fare. Tickets to the Super Bowl reportedly cost an average of $10,000.

“I couldn’t believe it,” Freeman told me as we sat by hotel pool. “I thought they were scamming me when they called.”

Not only was Freeman given this gift that otherwise would have cost thousands, he was also given the opportunity to rub shoulders with some of the team’s players, a priceless experience to a diehard Chiefs fan — yes, Freeman is staying at the same hotel as the players.

As we sat talking, Chiefs star safety Tyrann Mathieu walked by, and Freeman got a quick picture with him. Freeman, now 76, kept his composure while chatting with the Mathieu. He even started bragging to Mathieu that the media (me) was interested in interviewing him.

“We have sat through a lot of rotten games”, Freeman said. “I had faith that they would be back, it’s just taken time.”

He said there was never a time he questioned renewing his season tickets. Considering the Chiefs drafted star quarterback Patrick Mahomes a few years ago, it doesn’t appear likely the Chiefs will enter a downturn anytime soon — Freeman should keep his season tickets for as long as he can.

Freeman recalls the price he paid for his Super Bowl tickets in 1970, a mere $15. That’s a little different than the going rate to tickets to this year’s big game.

“It wasn’t as big of a deal,” Freeman said as he scrolled through all the pictures he had with Chiefs players on his phone. “The stadium was not sold out, maybe only two-thirds.”

Freeman is so happy to be down in Miami, but he also has a relaxed confidence when talking about his team’s chances.

“I don’t know if we are going to have any hurricanes while we are down here, but we are bringing a tornado,” he said. “A tornado called Patrick Mahomes.”