Home
Market
'I'm not happy with him,' Trump says of military aide who testified against him
Prev Article Next Article
This post was originally published on this sitehttps://i-invdn-com.akamaized.net/trkd-images/LYNXMPEG161D6_L.jpg 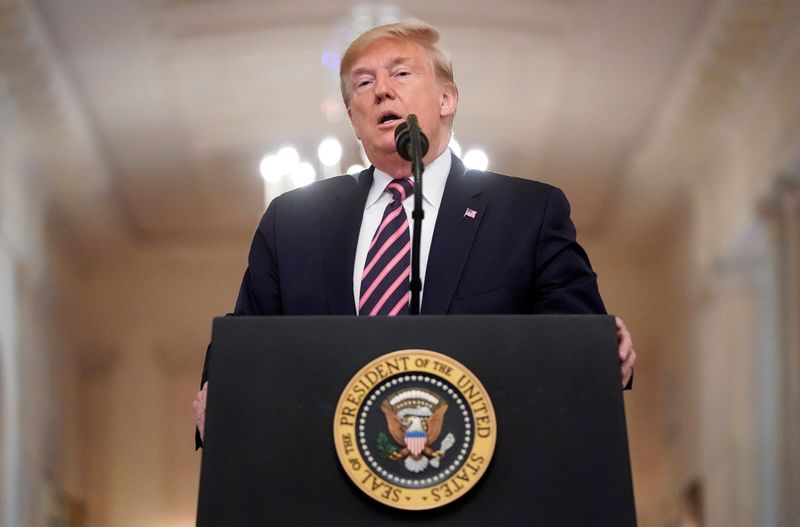 © Reuters. U.S. President Trump delivers a statement about his acquittal at the White House in Washington

By Jeff Mason and Steve Holland

WASHINGTON (Reuters) – U.S. President Donald Trump said on Friday the top White House expert on Ukraine might be ousted after testifying against the president in the impeachment process that ended this week with Trump’s acquittal.

Asked about media reports that he might remove Army Lieutenant Colonel Alexander Vindman from the National Security Council (NSC), Trump told reporters: “I’m not happy with him. You think I’m supposed to be happy with him?…They’re going to be making that decision.”

A source familiar with the situation told Reuters that Vindman would be reassigned to the Defense Department.

Vindman testified to the House of Representatives impeachment inquiry in November that Trump made an improper demand of Ukrainian President Volodymyr Zelenskiy in a July phone call that became the centerpiece of the probe of the Republican president.

Vindman told a Democratic-run committee “I couldn’t believe what I was hearing” in the phone call. Trump asked Zelenskiy to launch investigations into both Democratic rival Joe Biden and a widely debunked conspiracy theory that Ukraine, not Russia, was behind meddling in the 2016 U.S. presidential election.

Trump emerged victorious from his trial this week with a vote in the Senate, controlled by fellow Republicans who rejected abuse of power and obstruction of justice charges.

But the president, whose term has been clouded by investigations into Russian interference in the election and then the impeachment inquiry, has said he is still bitter about the ordeal as he turns his attention to the Nov. 3 presidential election.

Bloomberg News first reported Vindman’s planned removal, citing two people familiar with the matter who said the move would be cast as part of a larger downsizing of the NSC.

Another senior white House aide who testified over impeachment, Jennifer Williams (NYSE:), left earlier this week for a post at the U.S. military’s Central Command, according to Bloomberg News.

Trump has cast both Vindman and Williams as “Never Trumpers” who oppose him.

Trump denied a CNN report that he was weighing a permanent chief of staff to replace acting aide Mick Mulvaney, who was a central figure in the impeachment inquiry.

“That was a false report. I have a great relationship with Mick,” Trump said.