Home
Stocks
In One Chart: How Mike Bloomberg is dominating in Super Tuesday advertising — in one chart
Prev Article Next Article
This post was originally published on this site 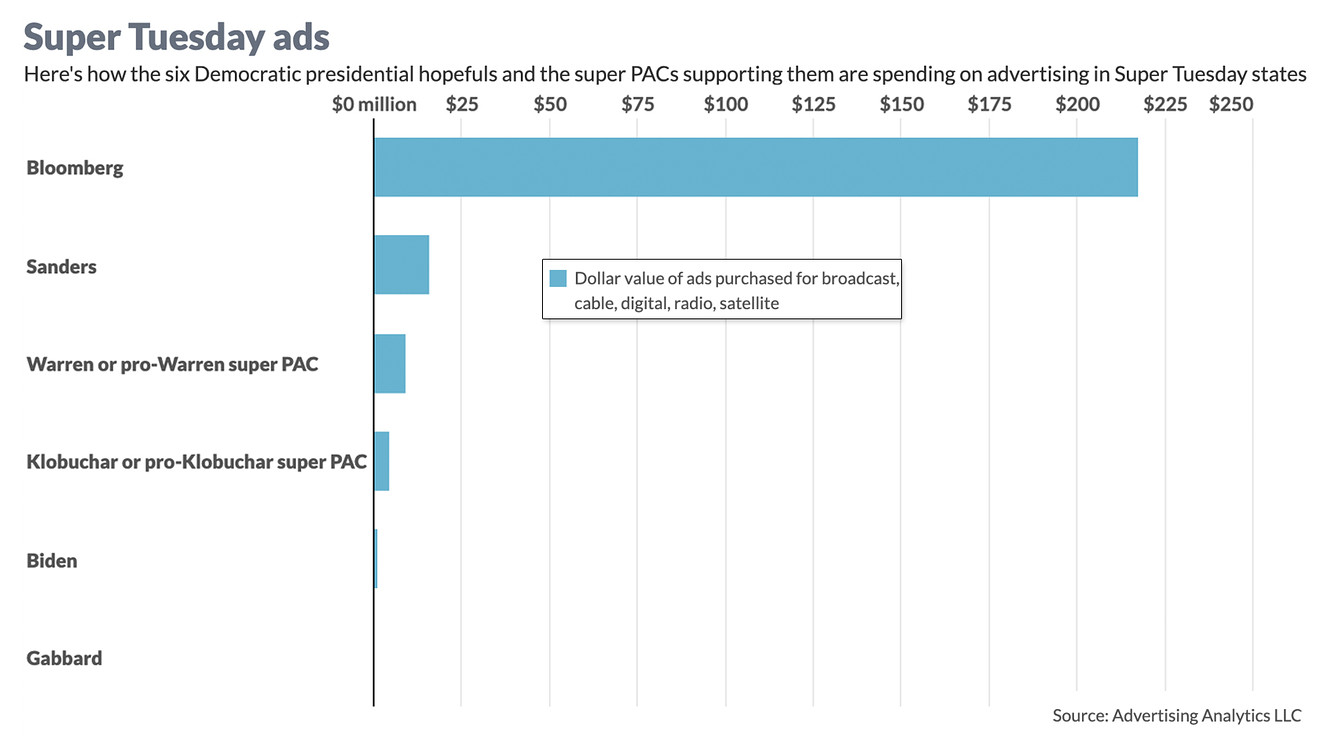 Ahead of the Democratic presidential primary’s Super Tuesday voting in 14 states, Mike Bloomberg is well ahead of his rivals in spending on advertising aimed at those states.

The self-funded billionaire contender has shelled out about $217 million on ads for broadcast, cable, digital, radio and satellite networks, according to Advertising Analytics data as of Friday afternoon. Front-runner Bernie Sanders is a distant second with $16 million spent.

Bloomberg’s advantage with ads mirrors his overall big edge with money in the Democratic race. His campaign reported spending more than $400 million in the last round of financial disclosures, well ahead of the Sanders campaign’s outlay of about $123 million and former contender Tom Steyer’s spending of $254 million.

Former Vice President Joe Biden’s campaign is showing just $1.3 million in Super Tuesday ad spending, but his campaign is expected to shell out more than that figure after he won decisively in Saturday’s primary in South Carolina and then scored about $10 million in donations on Saturday and Sunday.

There should more ads booked on Monday but most campaigns don’t book activity over the weekend as TV stations are closed, said John Link, sales director at Advertising Analytics.

The pro-Biden Unite The Country super PAC hasn’t been spending on Super Tuesday ads, while the super PACs supporting Sen. Amy Klobuchar of Minnesota and Sen. Elizabeth Warren of Massachusetts have bought ads, according to Advertising Analytics.

The Sanders campaign has been touting its recent fundraising success, announcing Sunday that it raised $46.5 million in February, ahead of Warren’s $29 million for the month and Biden’s nearly $18 million. The Vermont senator has been leading the 2020 Democratic field in getting the most money from supporters, having raised about $122 million as of Jan. 31.

Bloomberg’s ad spending has included buying three minutes of prime-time airtime on NBC and CBS on Sunday night. The former New York City mayor criticizes President Donald Trump’s handling of the coronavirus in the pricey ad, which Henrietta Treyz, director of economic policy at Veda Partners, has described as “unprecedented.”

The Super Tuesday voting is putting in play more than a third of the pledged delegates at July’s Democratic National Convention — 1,357 out of 3,979. It should help winnow the field as the 2020 Democrats battle to take on Trump in November’s general election.

Some pundits have been assuming Sanders, a democratic socialist, will win the Democratic Party’s nomination, and that’s led some investing strategists to pin the stock market’s SPX, +2.55% DJIA, +2.90% recent slide in part on fears of a Sanders presidency.