Home
Stocks
In One Chart: Warren Buffett’s ‘yardstick’ for stock-market values still points to ‘very elevated’ downside risk
Prev Article Next Article
This post was originally published on this site

The stock market broke new ground last week in terms of the breakneck speed of its selloff, with the S&P 500 SPX, -2.22% dropping 10% from its record high in a mere six days, faster than any other time in history.

Must be some hot bargains out there, with stocks trading at mouthwatering discounts, eh?

Not so fast, says the Felder Report’s Jesse Felder, who pointed to “The Buffett Yardstick,” in reference to what the Berkshire Hathaway BRK.A, -3.36% boss calls “the best single measure of where valuations stand at any given moment”: 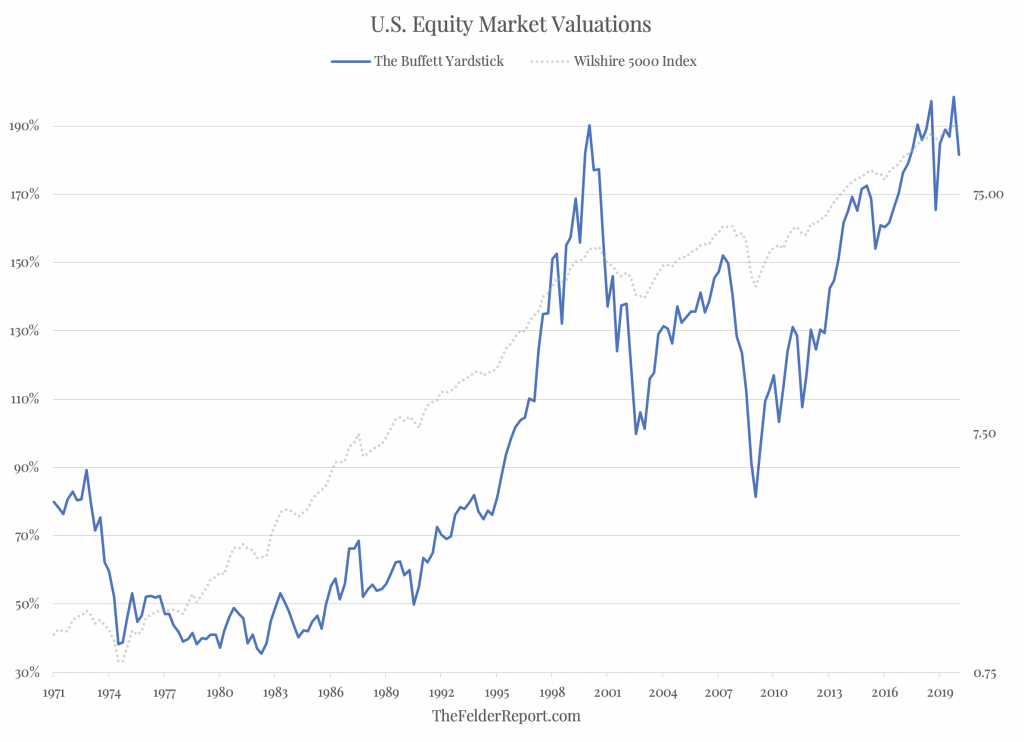 “It’s important to put the recent action into some sort of context,” Felder wrote in regards to the chart attached. “For long-term investors, it’s probably most important to understand that the decline we saw last week has in no way made the broad stock market look cheap, as some might suggest.”

The “yardstick” basically shows the market value of all publicly traded securities as a percentage of the country’s business, or gross national product, GNP. As it stood before Thursday’s market retreat, the numbers show that stocks are just as expensive as they were in 2000 before the 50% drop and they are 20% more expensive than they were ahead of the 57% plunge during the Financial Crisis.

“So, it’s hard to argue there is much value in the broad indexes at all even after the steep correction we saw last week,” Felder wrote in a blog post this week. “What’s more, downside risk is still very elevated.”

There are no shortage of downside risks in Thursday’s nasty session, with the Dow Jones Industrial Average DJIA, -2.41% off by more than 800 points at its morning lows. The S&P 500 SPX, -2.22% and Nasdaq Composite COMP, -1.82% were also sinking after a burst higher in the previous session.