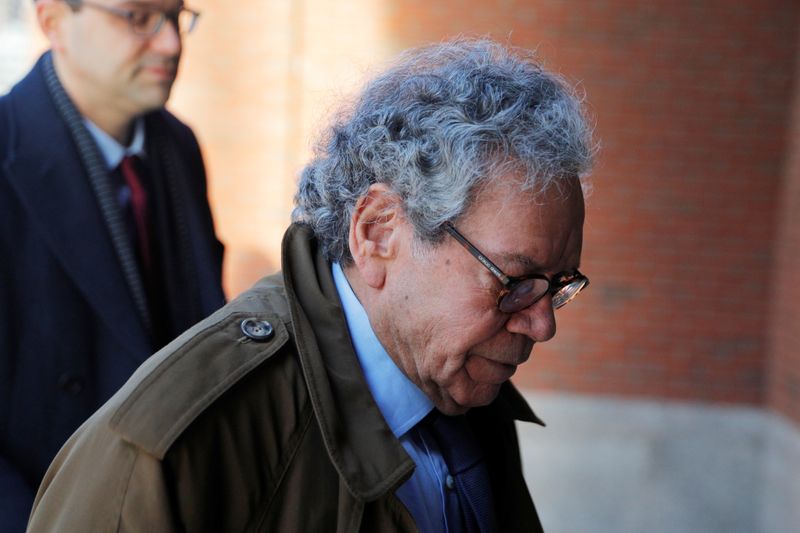 © Reuters. John Kapoor arrives at the federal courthouse in Boston

BOSTON (Reuters) – John Kapoor, the founder of Insys Therapeutics Inc (PK:), on Thursday could be sentenced to several years in prison and ordered to forfeit up to $113 million for his role in a bribery and fraud scheme that contributed to the U.S. opioid crisis.

U.S. Attorney in Boston Andrew Lelling has asked the court to sentence Kapoor to 15 years in prison and seek more than $113 million from him.

U.S. District Court Judge Allison D. Burroughs already has sentenced four other former Insys executives, but her punishments have been less than three years in prison on government recommendations of more than 10 years.

Kapoor is scheduled to become the highest-ranking pharmaceutical executive to be sentenced in a case linked to the opioid crisis.

Last year, a federal jury in Boston found Kapoor guilty of racketeering conspiracy in a scheme that involved bribing doctors to prescribe the company’s fentanyl-based painkiller, Subsys. The scheme also defrauded insurers into paying for the drug.

From 1999 to 2017, some 400,000 people died from overdoses involving an opioid, including prescription and illicit drugs, according to the U.S. Centers for Disease Control and Prevention.

“Kapoor was the company’s founder … who did not hesitate to use the authority of his financial position to dictate the criminal strategies employed by Insys,” Lelling’s office wrote in a filing with the court.

Kapoor, who served as the Chandler, Arizona-based drugmaker’s chairman and later chief executive, lost nearly $80 million through his association with Insys, according to court filings by his defense team. Insys filed for bankruptcy protection in 2019.

“He does not expect anyone to feel sorry for him for that loss, and he is of course facing other sentencing consequences that cannot be expressed in monetary terms,” his defense team said in filings with the court.

In a letter to the judge, Mary Gauwitz, one of many friends who wrote in support of Kapoor, described him as a man who enjoys a $4.99 rotisserie chicken from Costco (NASDAQ:). He also made sure everyone at the Editha House in Phoenix, which provides housing and assistance to cancer patients, received rotisserie chickens, too, if they wanted one, Gauwitz wrote.