Home
Market
Intel signals 2020 will be a turnaround year for chip industry leader
Prev Article Next Article
This post was originally published on this sitehttps://i-invdn-com.akamaized.net/trkd-images/LYNXMPEG0M2DN_L.jpg 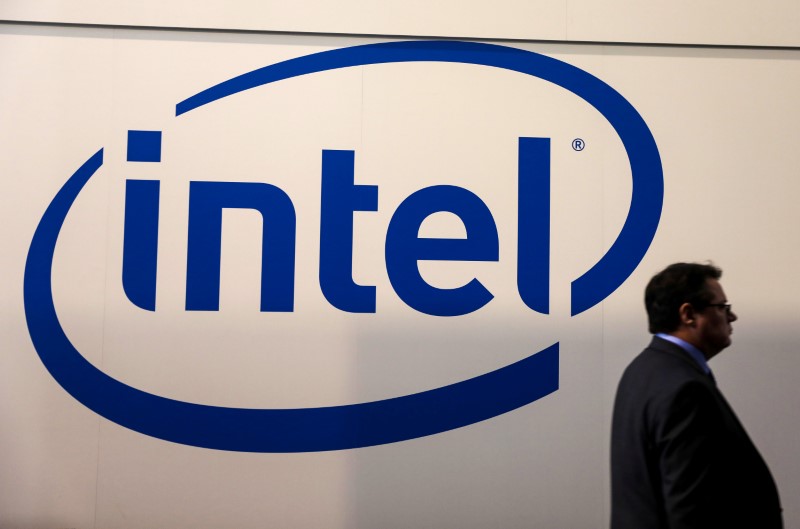 © Reuters. FILE PHOTO: A visitor passes an Intel logo at the Mobile World Congress in Barcelona

By Stephen Nellis and Munsif Vengattil

(Reuters) – Intel Corp (O:) on Thursday cemented the market view that the chip industry is turning around after a prolonged slowdown, forecasting better 2020 revenue and profit than Wall Street anticipated, driven by cloud computing demand.

The company’s sales in its closely watched data center business jumped 19%, helping it beat fourth-quarter profit and revenue estimates and sending its shares up 7% in extended trading.

Chief Financial Officer George Davis said in an interview that sales to cloud computing providers were up 48% year-over-year in the fourth quarter, a trend expected to continue this year.

The Santa Clara, California-based chipmaker expects fiscal year 2020 revenue of about $73.5 billion, more than $1 billion ahead of the Wall Street consensus, according to IBES data from Refinitiv.

Davis did not name specific customers, but so-called “hyperscale” cloud providers such as Amazon Web Services (O:) and Microsoft Corp (O:) in the United States and Alibaba Group Holding (N:) and Baidu Inc (O:) all purchase Intel chips for data centers whose capacity they rent out to large businesses.

“What we’re seeing is very strong demand from cloud players,” Davis told Reuters. “I have to give credit to the hyperscalers for this quarter.”

Intel said its transition to a newer generation of chipmaking technology was progressing better than it expected and that it would boost its capacity to make chips for personal computers, in a sign that the manufacturing woes that plagued the chipmakers over the past year were starting to ease.

“We think this is going to help us close the gap to customer demand that we’ve been experiencing. We think all of this is (going to be) resolved in 2020 and we’ll actually be able to start building inventory at the end of the year, which we have not been able to do for two years,” Davis told Reuters.

However, Intel’s Davis cautioned that the positive forecast was not directly attributable to the trade deal signed between U.S. and Chinese officials last week.

“It’s a little fresh to really have a good understanding of how that specific trade deal is going to have an impact on (Intel’s customers’) thinking,” Davis said. “But we like the demand signals we’re getting.”

After years of acquisitions outside its core area of processing chips under previous leaders, Intel Chief Executive Bob Swan has set a goal of becoming more disciplined about spending, slowing investments in areas like memory chips and shedding struggling businesses.

Intel has doubled down on its core markets such as personal computers and data centers, both of which beat analysts’ fourth-quarter expectations.

Revenue from Intel’s client computing business, which caters to PC makers and is still the biggest contributor to sales, rose 2% to $10 billion in the fourth quarter, beating FactSet estimates of $9.74 billion.