Home
Market
Investors ditch market risk as stocks fall into correction
Prev Article Next Article
This post was originally published on this sitehttps://i-invdn-com.akamaized.net/trkd-images/LYNXNPEG1Q1YC_L.jpg 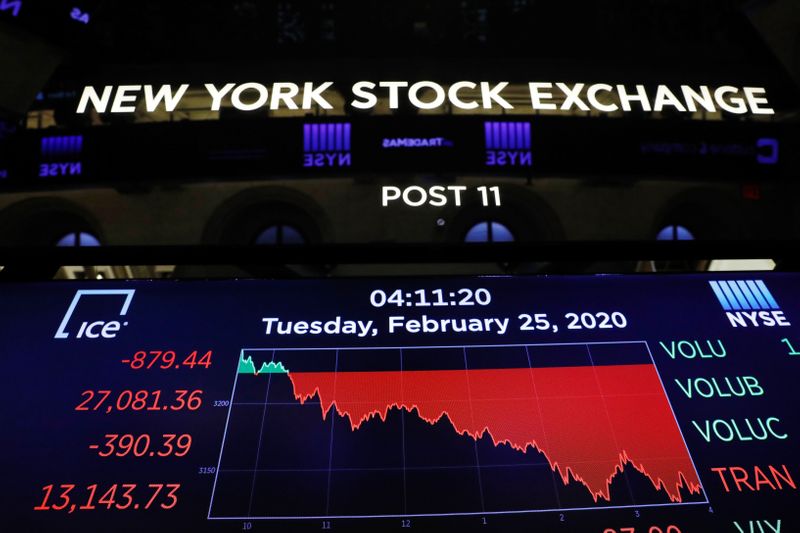 The S&P 500 fell more than 4% on Thursday, extending a market rout that has now sliced more than 10% off of its closing peak on Feb. 19, which would confirm that the benchmark index has been in a correction since then.

Treasury bond yields, meanwhile, hit all-time lows for the third consecutive day while gold jumped more than 1%, a sign that investors were racing for safe havens.

Investors and analysts said the market volatility will likely continue until there are signs that the virus, or COVID-19, has peaked in Europe or the United States. There have been 15 confirmed U.S. cases of the virus, according to the Centers for Disease Control.

“The concern is the outbreak is just getting started,” said Sameer Samana, senior global market strategist at Wells Fargo (NYSE:) Investment Institute, who is moving away from sectors like industrials that benefit from global economic growth and focusing on companies with low leverage and high profitability.

The quick turnabout in investor sentiment comes on the heels of a more than 30% gain in the S&P 500 in 2019, bolstered by a combination of record-low unemployment and expectations that a U.S.-China trade deal would accelerate global economic growth.

“The important thing to keep in mind is that so much of last year’s rally in stocks was premised on the U.S. economy, global economy and corporate earnings improving dramatically,” said Willie Delwiche, investment strategist at Robert W. Baird. With those expectations already baked into share prices, “what we have right now is a valuation-inspired repricing,” he added.

The forward price-to-earnings ratio of the S&P 500, for instance, now stands at 17.8, according to Refinitiv data. Earlier this month, the index traded at a forward P/E of 18.9, its most expensive valuation since 2002, according to Bank of America (NYSE:) Global Research.

The uncertainty of how long the outbreak will last and how it will disrupt the economy makes this sell-off different from the nearly 20% decline in the S&P 500 in 2018, which was driven by concerns that the Federal Reserve would continue on its rate-hiking path despite slowing global growth, said Don Ellenberger, head of multisector strategies at Federated Hermes.

Traders now see is a nearly 70% chance that the Fed moves to cut interest rates at its March 18 meeting, up from just an 8% chance last week.

“You’re at a very delicate point relative to investor psychology right now. You won’t necessarily trip into a panic today or tomorrow or next week but you easily could,” said Charles Lemonides, portfolio manager of the ValueWorks LLC hedge fund.

As a result, he is positioning his portfolio for more volatility. At the same time, Lemonides is increasing his positions in companies in the energy sector, whose shares have been “decimated,” he said.

The sector has had “a very extended sell-off and it’s pretty close to capitalization levels,” Lemonides said.

Troy Gayesk, co-chief investment officer of alternative investments firm SkyBridge, said he has been buying gold for the first time since 2011 while exiting equity call options that would profit from a continued rally in the S&P 500.

“We are going into March certainly more conservative than we did coming into January and the question is, “Do we get a clear signal to re-engage or not?'” he said. The virus outbreak has created “a much murkier environment where having further material upside in equity markets is much more questionable,” Gayesk said.