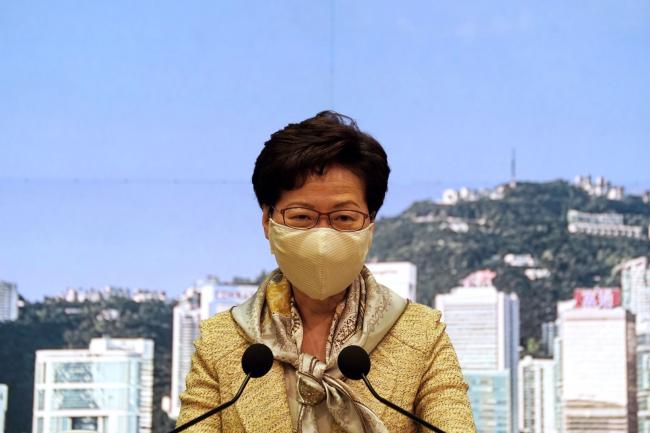 China’s top legislative body approved the measure at the end of three-day meeting in Beijing. Hong Kong’s leader, Chief Executive Carrie Lam, declined to comment on the legislation, much of which wasn’t immediately released to the public. She did, however, hit back at the U.S., saying that Hong Kong wouldn’t be “scared” by threat of sanctions.

The national security law was expected to take effect by Wednesday — the 23rd anniversary of the city’s return to China and a day usually marked by mass protests. The Civil Human Rights Front, which has organized some of Hong Kong’s biggest pro-democracy demonstrations, was expecting an appeals hearing later Tuesday against a police decision to ban the march. Activist Joshua Wong quit his political party.

Here’s the latest (all times local):

Pro-democracy activist Joshua Wong announced on Facebook (NASDAQ:FB) that he would withdraw from Demosisto, the Hong Kong political party he founded, and continue activism in his personal capacity. While Wong didn’t say why he was quitting the group, he said activists needed faced a grim fate after the security law’s passage, citing concerns the measure could lead to in prison or even extradition to the mainland.

Other founding members of the group, including Nathan Law, Agnes Chow and Jeffrey Ngo, also announced their withdrawal from the party.

The Hong Kong government planned to publish the national security law Tuesday for it to take effect the same day, the Ming Pao newspaper reported, without citing anyone. The Chinese government in Beijing will hold a news briefing later Tuesday to discuss the decision, Ming Pao said.

U.S. Secretary of State Michael Pompeo hit back at Beijing’s imposition of visa restrictions for Americans who “behave badly in Hong Kong affairs,” saying it was China’s crackdown on the former British colony that prompted Washington to “retool its relationship with the territory.”

“The Chinese Communist Party’s threats to retaliate by restricting visas for U.S. citizens exposes once again how Beijing refuses to take responsibility for its own choices,” Pompeo said in a statement.

“The National People’s Congress is still in a meeting and on the agenda today there’s the relevant national security law for Hong Kong,” Hong Kong Chief Executive Carrie Lam told reporters at a weekly briefing minutes after news of the law’s passing broke. “At this moment it is inappropriate for me to respond to any questions or give any explanations.”

Lam — who has publicly defended the measure — did acknowledge there were many concerns about the legislation. She also said she wasn’t scared by the threat of U.S. sanctions. “We are not going to be deterred by such actions,” she said.

Hong Kong media, including Now TV, the South China Morning Post and others, reported that China’s top legislative body — the National People’s Congress Standing Committee — had unanimously approved the security law for Hong Kong at the end of a three-day meeting in Beijing. Much of the legislation remained secret and details weren’t immediately released.

The Trump administration made it harder to export sensitive American technology to Hong Kong, suspending regulations allowing special treatment to the territory over dual-use technologies like carbon fiber used to make both golf clubs and missile components.

“With the Chinese Communist Party’s imposition of new security measures on Hong Kong, the risk that sensitive U.S. technology will be diverted to the People’s Liberation Army or Ministry of State Security has increased, all while undermining the territory’s autonomy,” U.S. Commerce Secretary Wilbur Ross said, providing little detail on specific impacts.