Home
Stocks
Key Words: Constitution is ‘not a suicide pact’ that leaves Americans ‘stuck’ with Trump, Nadler says
Prev Article Next Article
This post was originally published on this site 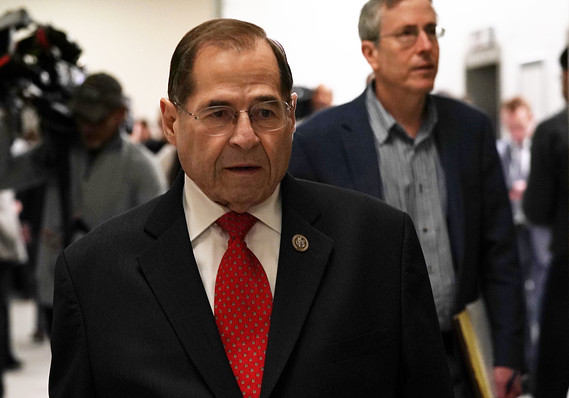 Jerry Nadler of New York is the chairman of the House Judiciary Committee and a House manager of the Trump impeachment trial in the Senate.

As House Democrats pressed their case in the second day of arguments in the impeachment trial of President Donald Trump, the head of the House Judiciary Committee said the country isn’t obligated by its defining legal document to keep him in power:

‘The Constitution is not a suicide pact. It does not leave us stuck with presidents who abuse their power in unforeseen ways that threaten our security and democracy.’

Rep. Jerry Nadler, one of the House managers, was arguing it isn’t possible to limit impeachment to acts that are already written into law. He said it didn’t occur to him until recently that the president would pressure a foreign leader with the aim of harming his own political opponents.

As the Associated Press writes, each side has up to three days to present its case, and House prosecutors will likely finish on Friday. Trump’s lawyers will then have as much as 24 hours to rebut the House managers’ case.

Trump and his lawyers have argued the president has done nothing wrong in his dealings with Ukraine.

The president is widely expected to be acquitted in the Senate trial, with his fellow Republicans holding 53 of the chamber’s 100 seats. The prospect of acquittal helps explain why the stock market SPX, +0.11% hasn’t reacted much to impeachment developments.

Should Trump be removed, though, Vice President Mike Pence is first in line to assume the presidency.

Now read: Here’s the presidential line of succession in the unlikely event that Trump is removed from office by impeachment trial