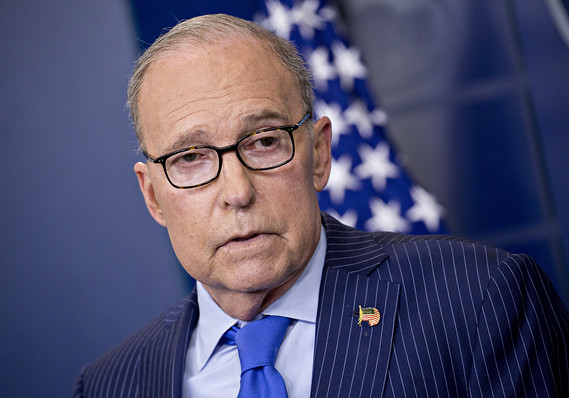 Top White House economist Larry Kudlow on Friday said investors should think about getting back into the stock market as the Dow Jones Industrial Average was on track to its worst weekly loss since 2008 over fears the COVID-19 epidemic may impact the global economy.

‘I still think long-term investors should give very serious thought to coming back in or adding to their positions in the stock market.’

Appearing on Fox Business Network, the director of the White House National Economic Council said “our threat assessment is low and the economy is fundamentally sound.”

As MarketWatch reports, there are few signs investors are eager to wade back into the market following the acceleration of the selloff late Thursday. The Dow DJIA, -2.98%   was off nearly 500 points in late-morning trading Friday.

Kudlow in the interview and in separate comments to reporters stressed that he hasn’t seen evidence of supply-chain disruptions affecting the U.S. economy, and that the Trump administration isn’t planning what he called “precipitous policy moves.”

See: What Apple, Microsoft, Nike and other U.S. companies are saying about the coronavirus outbreak

The NEC chief is a member of the administration’s task force on the virus that is headed by Vice President Mike Pence. Pence spoke to a conservative political conference on Thursday and called the risk to Americans from the virus low but said the administration is “ready for anything.”

Now read: How far away is the coronavirus-fueled stock slump from entering a bear market?