Home
Stocks
Key Words: Monica Lewinsky on Trump impeachment witnesses: ‘gee … I had to give that videoed witness testimony…’
Prev Article Next Article
This post was originally published on this site

After Republican Sen. Lamar Alexander released a statement on Thursday night saying that he will not vote to hear witnesses in President Trump’s impeachment trial, claiming that the commander-in-chief’s actions have been “inappropriate” but not “impeachable,” former impeachment trial witness Monica Lewinsky had this to say:

“gee, too bad i had to give that videoed witness testimony for the senate trial in the clinton impeachment. (i mean, talk about unflattering lighting and having a bad hair day.)”

That struck a chord with Twitter TWTR, -2.23%  users furious over the fact that Alexander and other Republican senators are likely to block a vote to call witnesses on Friday, meaning the president could be acquitted as early as Friday night. The hashtag #WeWantWitnessesAndDocuments had drawn about 40,000 tweets by Friday morning, while #LamarsLegacy and #LamarAlexanderIsACoward were also trending.

gee, too bad i had to give that videoed witness testimony for the senate trial in the clinton impeachment. (i mean, talk about unflattering lighting and having a bad hair day.)

Lewinsky has been pointing out the differences between the Clinton impeachment and the Trump impeachment on her Twitter feed throughout this whole process. She tweeted “Are you f—-ing kidding me?” earlier this month, which appeared to respond to former independent counsel Ken Starr being appointed to the president’s defense team. Starr and Robert Ray, another lawyer added to the team, had exposed President Bill Clinton’s sexual relationship with Lewinsky, then a White House intern, during the counselors’ five-year investigation of the Whitewater land-development deal in Arkansas in which Bill and Hillary Clinton participated. The allegations in the Starr report led to Clinton’s 1998 impeachment. 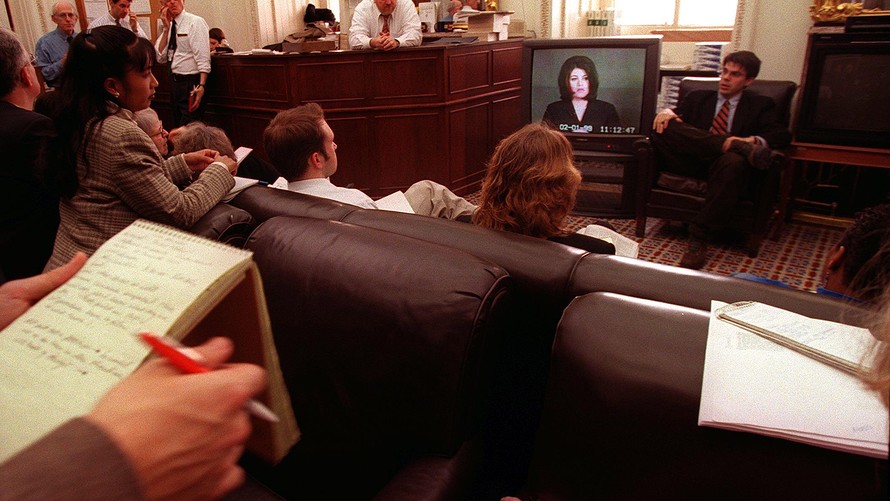 And that thrust Lewinsky into the spotlight, and her reputation was long tarnished for her role in the affair. It has been identified as often as “the Lewinsky scandal” as it was “the Clinton scandal,” as well as Monicagate and Lewinskygate.

So when University of Southern California law professor Orin Kerr mused on Twitter last spring about what it would have been like if the Starr report (whose 453 pages were released in full) got the same treatment as the Mueller report (whose disputed four-page summary by Attorney General William Barr predated by several weeks the release of the redacted two-volume, 448-page Mueller report), Lewinsky responded, “if. f—ing. only.” In other words, she suggested that if the details of her private life been kept secret, she might have avoided being the subject of harassment, ridicule and abuse in the media and online since 1998.

Lewinsky has become an advocate against cyberbullying since then, as well as a public speaker on digital privacy, reputation and resilience.

But she noted in interviews last fall that the Trump impeachment has made her a “punchline” again, although she also acknowledged that this investigation and trial is a “constitutional crisis, [and] it’s much bigger than me.”