Home
Stocks
Key Words: Texas Lt. Gov. Dan Patrick says grandparents are willing to die to save economy for their grandkids
Prev Article Next Article
This post was originally published on this site 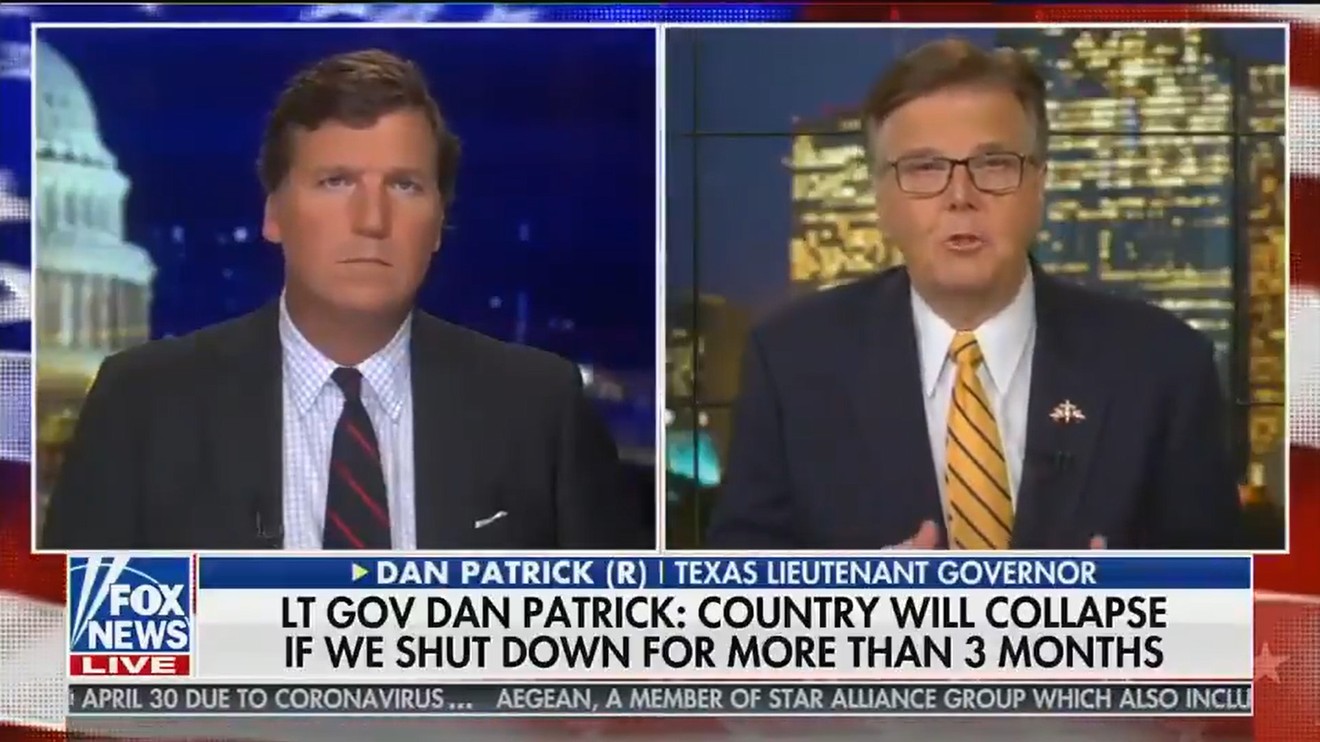 As the coronavirus outbreak batters the economy and businesses close, Texas Lt. Gov. Dan Patrick said Monday that plenty of seniors would be willing to sacrifice their lives in order to preserve the economy for their grandchildren.

“No one reached out to me and said, as a senior citizen, are you willing to take a chance on your survival in exchange for keeping the America that all America loves for your children and grandchildren? And if that’s the exchange, I’m all in.”

Patrick made the comments Monday night during an interview with Fox News host Tucker Carlson.

“So you’re basically saying that this disease could take your life, but that’s not the scariest thing for you,” Carlson said. “There’s something that would be worse than dying?”

Tx Lt Gov Dan Patrick says grandparents would be willing to die to save the economy for their grandchildren pic.twitter.com/wC3Ngvtsbj

Earlier in the day President Donald Trump and his chief economic adviser, Larry Kudlow, said that the economic cost of shutting down the country in order to stop the spread of COVID-19 may not be worth it.

“We can’t have the cure be worse than the problem,” Trump told reporters at a White House briefing late Monday.

Kudlow concurred, saying in a CNBC interview: “At some point, you have to ask yourself if the shutdown is doing more harm than good.”

Public health officials have strongly urged that it is vital for people to stay at home and for businesses to close for weeks, perhaps months, in order to slow the spread of the deadly virus, which threatens to overwhelm the U.S. health-care system.

Social-media reaction to Patrick’s comments were swift and scathing. Here are some of the less profane reactions:

Nice. @DanPatrick wants to sentence older Americans to death to save the economy. It’s only been a week Dan. Think you could hold out a month before you kill my parents? https://t.co/QIeW8UocdB

BREAKING: Tx Lt Gov Dan Patrick says that grandparents would be willing to die to save the economy for their grandchildren.

Well, I’m not willing to watch my elderly friends and family die In order to avoid a recession.

not sure how this message is going to play with the millions of grandparents whose main activity in life is watching this network https://t.co/kvLFPpV3nA

Telling y’all, if Dan Patrick wants to sacrifice *himself,* that’s fine. When he begins volunteering *other people* to sacrifice themselves on behalf of the state, then that’s genocide. https://t.co/HOMy5L3Csp

I cannot adequately express how angry & depressed I am about comments today from people like Dan Patrick, Larry Kudlow, and the President himself suggesting that this disease is no biggie and we ought to get back to normal soon – contrary to all evidence from abroad. 1/

The truly scary thing about this is that Dan Patrick is expressing the sort of euphoria that comes when people surrender to a cult leader’s thought-command.

“My heart is lifted tonight by what I heard the president say” https://t.co/8APrmM9PaT

Where’s @AARP on this whole Throw Grandma from the Train thing?