The strategist, in a research report dated Jan. 27, references “correction,” which market technicians usually define as a decline from a recent peak of at least 10%. However, his prediction that the market is more likely to decline by half that much indicates that he’s forecasting a retreat from stocks that have hovered near records rather than a traditional correction.

Wall Street investors, perhaps, shouldn’t need the strategist to determine the current state of the equities, however.

Stock markets have traded south in the past several sessions, with the Dow momentarily losing its grip on gains for 2020, as a rapidly spreading virus in China has sparked fears of a global outbreak that could curtail economic expansion in the world’s second-largest economy.

Chinese health officials said the coronavirus — an illness akin to SARS, or severe acute respiratory syndrome — has spread, infecting more than 2,800 people and claiming at least 80 lives around Wuhan city, China, where it reportedly originated.

However, Wilson said that the market’s slump is likely to be limited due to a Federal Reserve that has proven quick to provide liquidity to stalled-out markets as well as ultralow interest rates, which currently stand at a 1.50%-1.75% range. The Fed holds a two-day meeting beginning on Tuesday.

Read: These stocks are most at risk from the coronavirus

Wilson said he expected the S&P 500, including defensive names, to continue to outperform emerging market assets and small-caps.

The analyst and his research team explain it this way:

Check out the attached chart: 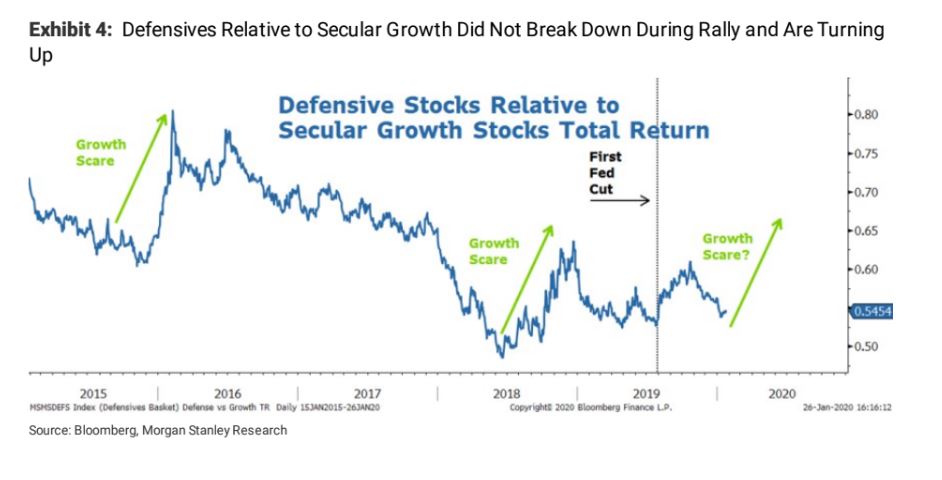 It is important to note that a number of analysts have said that financial markets, which have been trading near all-time highs, remain vulnerable to headlines surrounding the outbreak. Cases have turned up in other countries, including five in the U.S., as well as Japan, Taiwan, South Korea, Singapore and France.

In July of 2018, Wilson accurately predicted that the market would see its largest correction in months, with the rally showing signs of “exhaustion.” He wrote then: “The bottom line for us is that we think the selling has just begun and this correction will be biggest since the one we experienced in February.”

However, his more recent predictions have been less on the mark, which he has acknowledged.