Home
Stocks
Key Words: Trump on allowing Grand Princess cruise passengers to disembark: ‘I’d rather have them stay on, personally’
Prev Article Next Article
This post was originally published on this site 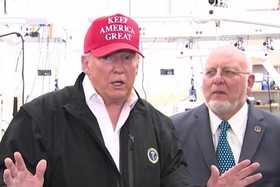 Asked on Friday during his visit to the Centers for Disease Control and Prevention whether he felt the 3,500 passengers and crew members stranded off San Francisco aboard the Grand Princess cruise ship since midweek should be brought ashore for coronavirus testing and, if need be, treatment, President Donald Trump had this to say:

He appeared to be indicating that, while he would prefer not to see the reported tally of confirmed COVID-19 cases in the U.S. rise as a result of allowing Grand Princess debarkations, he would leave the decision in the hands of others. Trump had put his vice president, Mike Pence, in charge of coordinating the federal coronavirus response nine days earlier.

Trump noted that the passengers in question are “mostly Americans.”

See video of the president’s remarks from the Guardian’s YouTube channel:

“Those that will need to be quarantined will be quarantined,” Pence said, separately, of the Grand Princess passengers. “Those who will require medical help will receive it.”

The 951-foot ship was en route to Ensenada, Mexico, after a Hawaii stop when it was diverted toward San Francisco, the Wall Street Journal reported.

Earlier Friday, the White House said the president had canceled the planned visit to the CDC later in the day so as not to disrupt urgent work there. After the president revealed on camera that his visit had instead been placed in doubt by a report that a CDC worker had tested positive for the coronavirus-borne disease COVID-19 — but ultimately “turned out to be negative,” Trump said — the stop-over returned to the president’s Friday itinerary.

Coronavirus update:All of MarketWatch’s latest coverage of the coronavirus and COVID-19