Among basketball players, LeBron James is not only King of the court, he’s also the King of Instagram.

The Los Angeles Lakers star makes more money per sponsored Instagram post than any other player in the NBA, and it’s not particularly close. According to data from HopperHQ’s Instagram Rich List and Instagram marketing platform Later, James makes $300,850 per sponsored post, almost double the amount of the next player on the list, Golden State Warriors guard Stephen Curry, who makes $155,100. 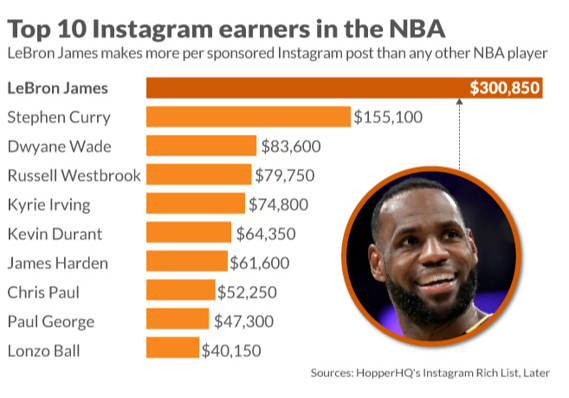 LeBron James dominates the NBA earnings on and off the court.

James is arguably the most famous athlete in the United States. He has more followers on Instagram than any basketball player, with 54.7 million.

HopperHQ claims its calculations account for followers, audience demographics, and engagement levels. When available, information from a player’s agent was used to further solidify the per post data.

LeBron James’s salary from the Lakers this season is $37.4 million, the 6th highest mark in the NBA. That works out to a little over $451,000 over an 82-game regular season. In addition, James has made millions off the court in a variety of business deals such as his ownership stake in Beats by Dre AAPL, -1.36%,  and his Blaze Pizza investment. It’s also possible that LeBron’s Nike NKE, -0.83% contract alone could eventually be worth over $1 billion, according to GQ

James, 35, is a 16-time NBA All-Star, a four-time MVP and a three-time NBA champion. James’s Lakers are in position to compete for an NBA championship this year as well — he won two championships with the Miami Heat and one with the Cleveland Cavaliers. The Lakers currently sit comfortably atop the NBA’s Western Conference standings as the All-Star break approaches.

See also: ‘I thought they were scamming me’: Kansas City Chiefs superfan gets the surprise of a lifetime

While James’s earnings per post are high for NBA standards, he is still far from Instagram’s FB, +0.70%  top pro athlete earner on social media. Cristiano Ronaldo makes $975,000 per Instagram post, according to HopperHQ.