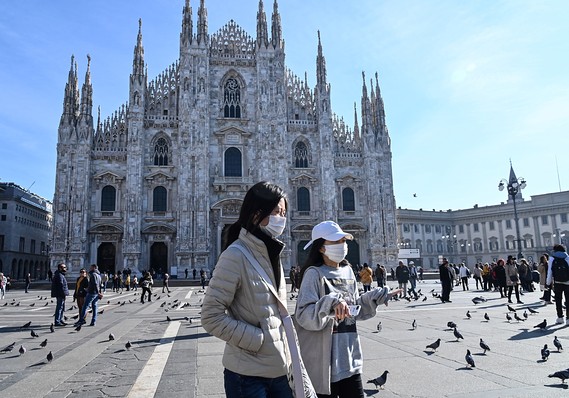 Two women wearing a protective facemask walk across the Piazza del Duomo, in front of the Duomo, in central Milan, on February 24, 2020.

British stocks remained on the defensive Tuesday after the biggest one-day percentage drop in more than four years.

The rapid spread of the coronavirus outside of China — notably in South Korea and Italy — continued to worry investors.

Of stocks on the move, Meggitt MGGT, -4.88%  shares fell as the engineering company forecast organic revenue growth between 2% and 4% and a rise in underlying margins of 30 to 50 basis points, and said margins in 2021 will range from 18.5% to 19% instead of a previous target of 19.9%. Meggitt, which makes parts for a variety of aircraft, said it’s being impacted by the production halt of the Boeing 737 MAX and the Covid-19 virus.

“The last few months – well, last couple of months, clearly, the coronavirus is impacting everybody,” said CEO Tony Wood on a call with analysts. “It’s been quite dramatic, quite sudden.” On Boeing, he said the “whole industry” is planning on a summer return to service.

SIG plc SHI, -18.21%  dropped 18% as CEO Meinie Oldersma and CFO Nick Maddock abruptly resigned from the insulation supplier that’s a component of the FTSE 250. Steve Francis, who previously was CEO at Patisserie Holdings, was named CEO through the end of the year, and Kath Kearney-Croft was named interim CFO after joining the firm in January. SIG said results for the year will be in line with guidance, with underlying pretax profit of around £42 million, and trading in the early part of 2020 seeing a “continuation of the trends in the last quarter of 2019.”

Pollen Street Secured Lending PSSL, +7.25%  surged 7.2% to 888 pence after disclosing that Waterfall Asset Management may make an offer of 900 pence per share in cash, a bid which is supported by top shareholder Invesco Asset Management. Pollen Street trust’s board fired the manager, Pollen Street Capital, after accusing it of “serious” and “repeated” breaches and of withholding company information. Read more about the story in Private Equity News.

In its own statement, Pollen Street Capital said the request was an “unusually extensive due diligence request document “ and that sharing the information would constitute a breach of confidentiality provisions. The manager also pointed out that it’s more doubled earnings per share since taking over.