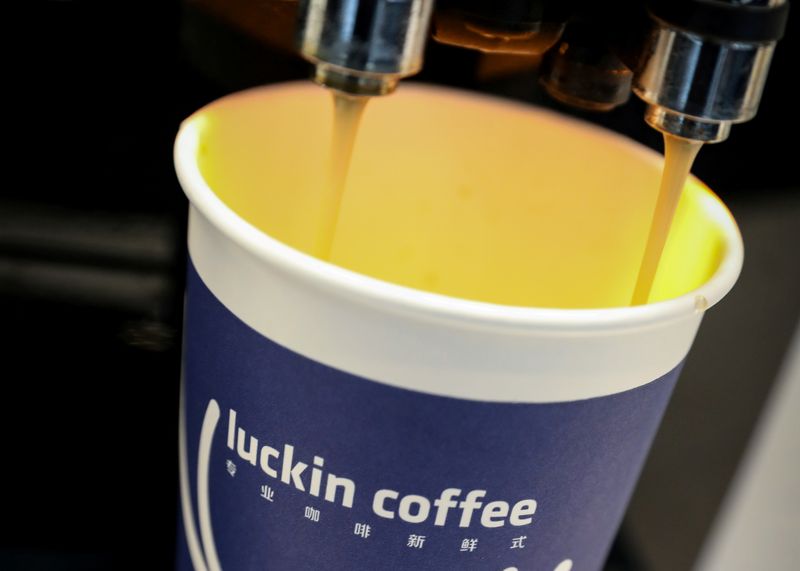 NEW YORK (Reuters) – China-based Luckin Coffee Inc’s (O:) shares could double in price after it overcomes the negative impact of the coronavirus outbreak and a widely publicized bearish bet against its stock, according to Andrew Left, managing partner at hedge fund Citron Capital.

Better known for his short bets, Left, who is also editor of the online investment newsletter Citron Research, has come out in defense of Luckin’s stock, which his fund owns. The stock will probably eventually trade at $60 per share on U.S. exchanges once uncertainty over the coronavirus clears, he told Reuters.

Luckin was forced to temporarily close an estimated 200 coffee shops in Wuhan, capital of the Hubei province in China and epicenter of the deadly virus outbreak.

Its stock slumped as much as 27% on Friday after hedge fund Muddy Waters said it had sold short the shares of the Chinese challenger to Starbucks (O:), citing an anonymous report that questioned the coffee chain’s financials.

Short-sellers aim to profit by selling borrowed shares, hoping to buy them back later at a lower price.

Luckin has denied all allegations in the anonymous report.

Left said he decided to take a position in the stock after conducting an analysis of Luckin’s business, including speaking with stakeholders and competitors and reviewing payments data.

“I don’t think that report is correct,” Left told Reuters.

Luckin shares staged a partial recovery on Friday when Left mounted a defense of its fundamentals via Twitter and said his fund had bought the stock.

About 30% of Luckin’s available shares have been sold short, with the dollar value of these bearish bets at $951 million, according to financial analytics firm S3 Partners. Left, dubbed “The Bounty Hunter of Wall Street” by New York Times Magazine, is known for successful bets against Valeant Pharmaceuticals (NYSE:) and for publishing critical reports on Chinese companies and profiting when their shares fell.

Carson Block, founder of Muddy Waters, has made his mark in the hedge fund industry by betting against the stocks of a number of Chinese companies that trade on North American stock exchanges after challenging their accounting practices.

The shop closures and movement restrictions due to the spreading coronavirus are putting a damper on Luckin’s first-quarter results, brokerage Needham said in a note on Tuesday.

Nevertheless, the firm boosted its target price on the company’s shares by 48% to $40, pointing to Luckin’s new unmanned retail and tea partnership store initiatives.