Home
Stocks
Mark Hulbert: This simple math means stock-market returns will be anemic over the next decade
Prev Article Next Article
This post was originally published on this site 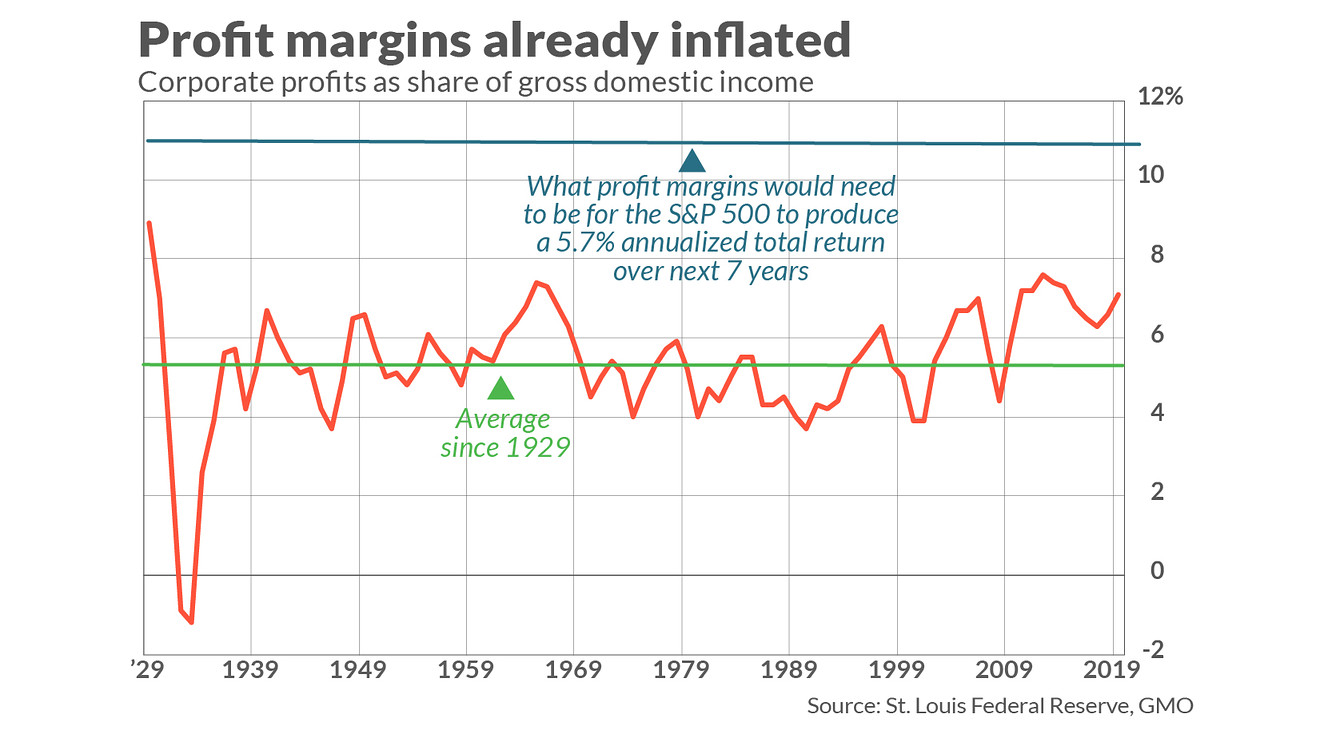 CHAPEL HILL, N.C. — It’s virtually certain the stock market over the next decade will not come anywhere close to equaling its historical total return of 6.9% annualized above inflation.

And that’s hardly something for the bulls to celebrate. According to the Congressional Budget Office, real GDP in the U.S. is projected to grow at a 1.7% annualized pace through 2030. And, low as that is, it almost certainly is too optimistic, for two reasons: Economic projections are almost always too rosy (the CBO assumes no recession over the next decade, for example), and in any case publicly traded companies inevitably grow more slowly than the overall economy.

I owe this latter insight to what William Bernstein and Robert Arnott in a long-ago article in the Financial Analysts Journal called “entrepreneurial capitalism.” They were referring to the chunk of economic growth attributable to non-public companies, such as startups and the like. (Bernstein is co-principal at Efficient Frontier Advisors and Arnott is founder of Research Affiliates.) Historically, total profits of publicly traded corporations have grown at an annualized rate about one percentage point lower than GDP.

That means the CBO’s projection translates into a projected inflation-adjusted total return for the S&P 500 of 2.6% annualized: The sum of 0.7% from earnings growth (one percentage point less than the CBO’s GDP projection) and the current dividend yield of 1.9%. That’s less than a third the historical rate and only a sixth of the last decade’s annualized growth.

How can the bulls wriggle out from underneath this anemic projected stock market growth rate? There are only three ways they can do so:

• Expanding profit margins. It is possible for earnings to grow faster than sales, of course, if profit margins widen. But margins are already higher than average (see accompanying chart).

James Montier, a member of the asset allocation team at Boston-based GMO, recently calculated how much margins must expand from their already-high level in order for the S&P 500 to produce a 5.7% annualized real total return over the next seven years (which is still lower than the long-term average of 6.9% annualized). He found that they would have to expand by more than three percentage points, something that, based on U.S. history, would be a “four standard deviation event” — something you’d expect to see only 0.1% of the time.

• A higher P/E ratio. It is possible for the S&P 500 to rise faster than earnings if the P/E ratio expands. But that also seems like a stretch, since the S&P 500’s P/E is already well above historical average.

To produce a 5.7% annualized real total return over the next seven years, Montier calculates, the market’s P/E would need to expand to 32 — higher even than it was at the top of the internet bubble. He calls such a P/E a “three standard deviation event” (something you’d expect to see only 0.3% of the time).

• Net buybacks. Earnings per share can grow faster than overall earnings if companies repurchase more shares than they issue. And it’s not clear that we can count on that. Over the last 20 years, even though the pace of repurchases has been widely noted in the press, they have merely matched issuance — resulting in virtually no net buybacks.

To be sure, many of these same arguments were made several years ago by analysts such as Montier and Arnott, and the stock market nevertheless powered ever higher. And it is not guaranteed that it won’t continue for a while longer as well.

But if you want to make the argument that the stock market over the next decade will produce a 10-year real total return much higher than 2.6% annualized, you have to assume that profit margins and/or P/E ratios will rise even further above average than they are already, or that net buybacks will be a huge factor in coming years.

Be my guest and try to make those arguments. Any of these possibilities seem like a long shot.

Lest you think this discussion means you should get out of all equities, let me hasten to add that the prospect for bonds is even worse. The 1.55% yield on the 10-year Treasury TMUBMUSD10Y, -6.77%  right now is 0.07 percentage point below what the Cleveland Federal Reserve reports expected inflation to be over the next decade (1.62%). That means that the 10-year Treasury’s inflation-adjusted expected return is minus 0.07%.

Rather than urge you to make a wholesale shift out of equities, my point is to reduce your expectations for both stocks and bonds.

We’ve been spoiled rotten by the outsized returns of both asset classes over the last decade. Don’t expect those returns to continue forever.

Mark Hulbert is a regular contributor to MarketWatch. His Hulbert Ratings tracks investment newsletters that pay a flat fee to be audited. He can be reached at mark@hulbertratings.com.