Home
Stocks
Market Extra: 7 reasons the stock market may face a severe bout of turbulence next week and beyond—only one is rising coronavirus cases
Prev Article Next Article
This post was originally published on this site

The ride from here could get a lot bumpier after the Dow registered its worst one-day loss since June 11 on Friday, knocking the blue-chip index to its lowest point since May 26, and at least momentarily knocking the wind out of equity investors who may be gradually losing their bullish thesis as U.S. COVID-19 infection rates climb higher.

Over the past week, the acceleration of the daily rate of new coronavirus cases in several American states has prompted investors to re-think the uptrend that has take the Dow Jones Industrial Average DJIA, -2.83% and S&P 500 index SPX, -2.42% more than 30% higher from their late-March lows and the technology-laden Nasdaq Composite COMP, -2.59% more than 40% from its recent 2020 nadir.

Read:Here’s a hedge fund strategy that just might work for you

The rise in new coronavirus cases on Friday prompted Texas and Florida governors to reverse some business reopening measures, after those states were among the earliest to attempt to restart economies that had been facing severe social-distancing restrictions to curtail the spread of the contagion. Texas reported 6,426 new coronavirus cases Thursday and Florida reported over 8,900.

The resurgence of the pathogen appeared to be sufficient cause for the White House Coronavirus Task Force, consisting of Vice President Mike Pence and the U.S.’s top public-health experts, which had gone quiet since April 27, to hold its first briefing since then on Friday.

For many investors who MarketWatch spoke with, the outlook for the market starts and ends with the epidemic subsiding or at least the discovery of credible treatments and vaccines.

However, there are a number of factors that also have the potential to exacerbate volatility in financial markets next week and into July.

Of course, those factors include the lingering effects of the pandemic but also a spate of issues that could create additional angst for equity investors:

Asked how he would rank the numerous problems Jamie Cox, managing partner for Harris Financial Group, told MarketWatch that the epidemic is first and foremost.

He said “everything starts and stops with the virus. All other effects are predicated on the outcome of the first.”

Indeed, the hopes for a sustained economic recovery rest on the U.S.’s ability to effectively beat back the coronavirus epidemic though the lack of a uniform nationwide strategy makes public health outcomes uncertain, experts say.

MarketWatch’s Jaimy Lee reports that a COVID-19 vaccine would change the trajectory of the pandemic, which has killed nearly 500,000 world-wide, allowing economies to fully reopen and people to return to work and school. However, a vaccine may not immediately be a panacea according to analysts at Bernstein in a June 5 report: “While we’re optimistic in the eventual development of SARS-CoV-2 vaccines, we would not expect the initial crop of vaccines to be silver bullets that solve the pandemic.”

Investors are awaiting the Labor Department’s monthly jobs report, which will be released on Thursday, due to the July 4 holiday being observed this year on Friday. The report for May showed a surprising 2.5 million jobs added, confounding expectations for another big decline and, perhaps, rising the expectations for a big bounce next week. The average estimate of economists surveyed by MarketWatch is for 3 million jobs to be added in June and the unemployment rate to fall again to 12% from 13.3%. A disappointment on Thursday could shock investors and flatten the market to the same degree that May’s report helped to spark a powerful uptrend.

Moreover, many have warned that a full recovery in jobs, which now sees some 30 million American collecting unemployment benefits, could take years to return to pre-coronavirus levels.

“As good as the recent economic data has been, we want to make it clear, it could still take years for the economy to fully come back,” wrote Ryan Detrick, senior market strategist at LPL Financial, in a Friday research note.

He notes that during the 10 recessions since 1950, it took an average of 30 months for lost jobs to recover, and none of those recessions saw labor-market losses of the magnitude and speed of this recession (see attached chart): 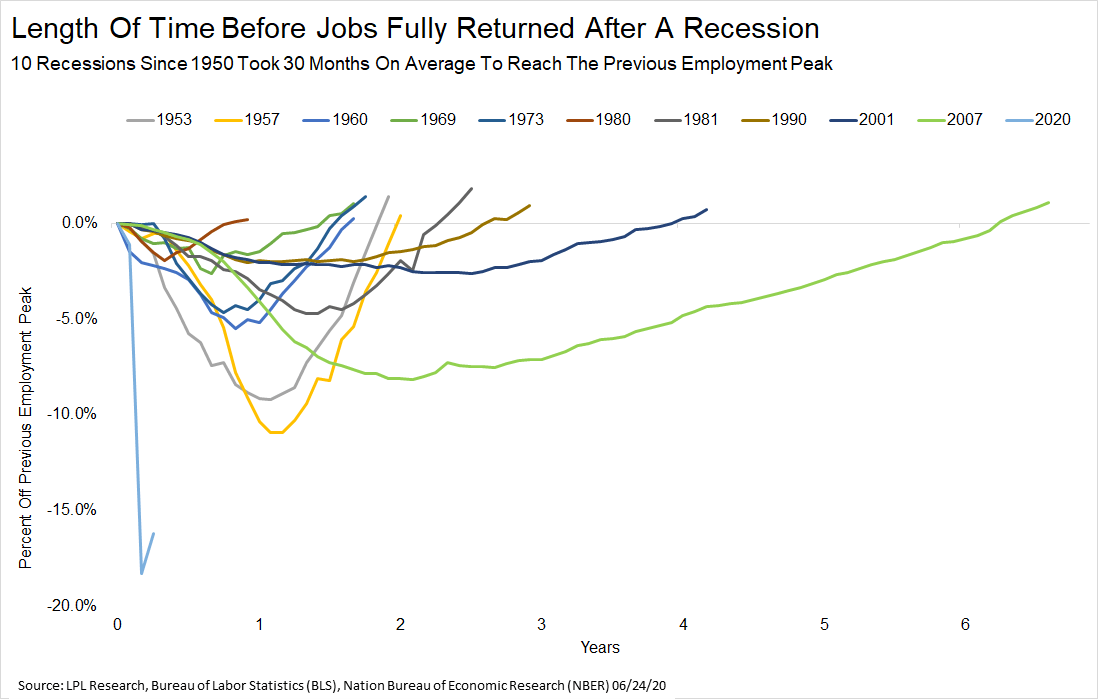 Market participants are predicting that billions of dollars of stocks and bonds could be shifted in investment portfolios, as investors aim to maintain specific allocations of stocks and fixed-income investments at quarter or month end. Those allocations are traditionally about 60% stocks and 40% bonds but the massive run-up in equities over the quarter may compel a sizable rebalancing.

“Given the significant rally in global equities that we’ve seen in the second quarter, it is natural to believe that there will be some quarter-end rebalancing out of stocks and into bonds,” Brian Price, head of investments for Commonwealth Financial Network, told MarketWatch.

He said that he’s seen estimates for pension funds moving upward of $75 billion out of stocks in the next week. CNBC reported that rebalancing could range $35 billion to $76 billion.

“The volatility that we’re seeing in the market today could absolutely persist as we approach the end of the quarter next week,” Price said. However, cautioned against investors timing the market in anticipation of the pension fund moves.

Further government stimulus spending to help small-businesses and individuals has been discussed in Congress and analysts have been predicting that another bipartisan relief measure is likely to come by late July. Treasury Secretary Steven Mnuchin earlier this month signaled the Trump administration was open to providing another round of aid but there are worries that there isn’t sufficient consensus to move forward with additional assistance.

The Democratic-run House passed a $3 trillion coronavirus relief bill last month, with the measure representing an opening offer in talks with the Republican-controlled Senate and the Trump administration.

Some experts say that without extra aid soon, the economy and the market could also be stalled.

A Siena College/New York Times poll published on Wednesday found presumptive Democratic presidential nominee Joe Biden pulling ahead of Trump 50% to 36%. This comes a week after a Fox News poll that had Biden leading 50% to 38%.

Biden has said he would raise the corporate tax rate to 28%, rolling back Trump’s 2017 corporate tax reforms. A report from Goldman Sachs estimates that such an outcome would shift 2021 earnings per share for the S&P 500 to $150 from a current estimate of $170.

Earlier this week, CNBC personality Jim Cramer attributed a selloff on Wednesday to Biden. “This to me is a Biden move,” adding “he sounds like another president that you get that is not favorable to capital. If that’s the case, I want to have a little cash.”

MarketWatch’s Tomi Kilgore notes that a break in a trendline for 10-year Treasury note could also bode ill for the stock market’s uptrend.

He notes that the yield on the benchmark 10-year TMUBMUSD10Y, 0.647% broke below a rising trend line, catching a flight-to-safety bid, to push it 3.8 basis points (0.038) percentage points lower to a yield of 0.636%, marking its lowest yield close since May 14, according to Dow Jones Market Data based on a 3 p.m. Eastern Time close.

That move to Dan Wantrobski, technical analyst at Janney Montgomery Scott, suggests that the uptrend off the COVID-19 low in early March has ended.

“The break here suggests that the pattern of higher lows since April has been blocked, and we may see lower yields in sessions ahead combined with a bigger retracement in equities that experienced since the March crash,” the analyst wrote.

A holiday-shortened week of trade, with the market’s closed in the U.S. in observance of the Fourth of July holiday on Friday could exacerbate price swings, as traders tend to head out early on holidays.