“I’m not sitting on Twitter all day,” he assured MarketWatch in a recent interview from the offices of Ritholtz Wealth Management in Midtown Manhattan. “I don’t think people have noticed.”

Brown’s one million Twitter followers could be forgiven for not noticing, as the Ritholtz Wealth Management co-founder and CEO, better known by his social-media moniker Downtown Josh Brown, tweets nearly a dozen times on an average weekday. Some of those posts link to submissions on his personal blog, The Reformed Broker, or short videos on The Compound, his firm’s YouTube channel. Those platforms are populated with new content on a near-daily basis.

If that isn’t enough, fans can always tune in to his twice-weekly appearances on CNBC’s Halftime Report, where Brown weighs in on the market-moving news of the day in his casually blunt, Long-Island inflection that sets him apart from the button-down professionals that make up much of the financial commentariat. 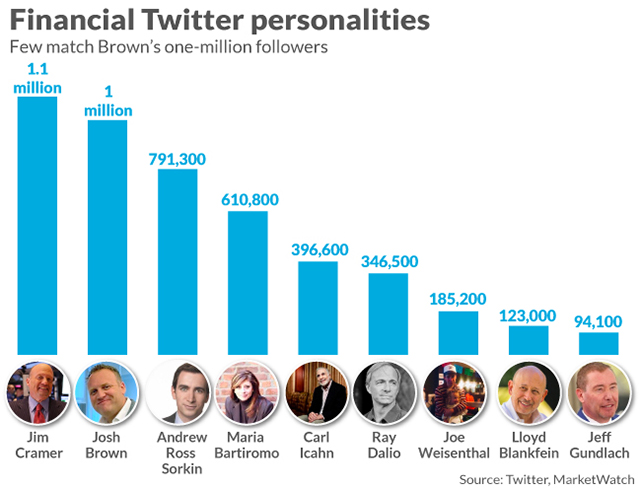 ‘I realized that the most successful people in our industry had gotten very good at both mass communication and one-on-one communication.’

To the casual observer, Brown’s relentless media blitz could be mistaken as a distraction from running a business with nearly 900 clients and $1 billion in assets, but he sees it as a central part of his job and an investment in the long-term future of the business.

“I figured out that the investment business is actually a communications business,” he says. What sets Ritholtz apart, Brown argues, is its ability to form a bond with its clients and a much larger universe of potential clients, to demystify the art of investing and reassure them in times of turbulence.

“I realized that the most successful people in our industry had gotten very good at both mass communication and one-on-one communication,” he says. “You’ve got to be able to convince investors that there are good decisions they can make, and that those decisions won’t always look good every day, but that they are the right decisions long term.

“You can’t persuade them of that one time. Almost every day or every week, you have to remind them of why they are investing the way they are. That is an edge that we have as a firm, so that even when we’re not standing face-to-face with a client, we’re still communicating to them all the time about what’s going on and what it means to them.”

Ritholtz Wealth Management was born with an ingrained understanding of do-it-yourself mass communication. The firm’s chairman, chief investment officer and co-founder, Barry Ritholtz, began blogging about markets and the economy nearly 20 years ago, as one of the first financial practitioners to regularly publish his unvarnished takes on markets and the economy on the internet.

Inspired in part by Ritholtz, Brown began his own blog in 2008, in time to chronicle the worst economic meltdown in generations and aim his wit and irreverence at a financial services industry that many viewed as corrupt, self-serving and incompetent. His work culminated in his 2012 polemic, “Backstage Wall Street,” wherein he attempted to take a sledgehammer to the financial industry’s commission-based orthodoxy. 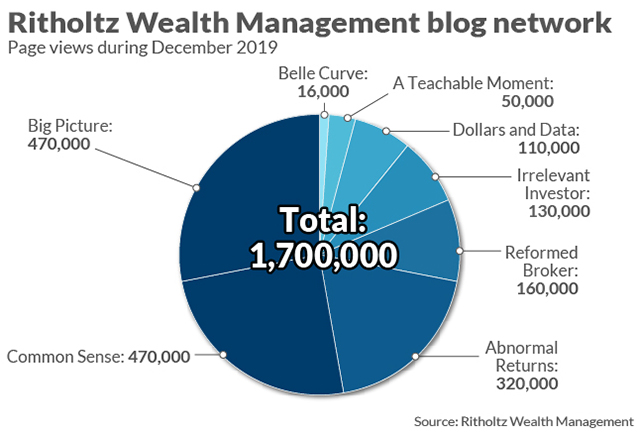 One major target of his attacks was the “Precision Myth” perpetrated by the Wall Street marketing machine. The myth holds that financial markets and the economy are far too complicated for an average person to understand, and can only be navigated with the advice of men in expensive suits who profess to know the path to building wealth. “One of the main differences between those who work in the money management industry and their customers is that the former are trained to never allow the latter to catch even a glimpse of doubt,” he wrote.

Brown’s marketing strategy is precisely the opposite: admit his ignorance and hope that with honesty comes credibility.

Though he enjoys talking about individual stocks on the internet and television, there is no stock picking at Ritholtz Wealth Management. “We’re not smart enough to do that,” Brown says. “We have no edge there. We’re trying to put clients in low-cost investments with a low-tax impact and make wise decisions about asset allocation.”

Cullen Roche, founder and chief investment officer of Orcam Financial Group and the author of the popular blog, Pragmatic Capitalism, told MarketWatch, “Josh is the first person to tell you, ‘I’m a big fat idiot, and if I tell you something about a stock on CNBC and you run out and buy it, you’re an idiot.’”

“He has a certain brutal honesty toward his own knowledge.” Roche added. “His ability to understand that he doesn’t know everything makes him a much better investor than most people, because they are overconfident.”

There is a tension between the investment philosophy of Ritholtz Wealth Management — which emphasizes largely passive instruments and avoiding behavioral pitfalls like falling in love with narratives surrounding single stocks — and Brown’s eagerness to discuss individual companies. Brown says that tension is resolved by being upfront with clients that these discussions are largely an intellectual exercise for those who find things like company strategy interesting.

“I love to tell my clients how interesting but useless much of my knowledge is,” Brown said. “I love to have a conversation with a client, if they want my opinion on Google’s latest quarter, or whatever, but it’s not going to help them — It’s fun to talk about, but what’s really going to help them is establishing a plan and sticking to it.”

While Brown helped to usher in a culture of investing that places high value on awareness of what one doesn’t know, his peers say that what really sets him apart from other advisers who promote themselves online is his humor.

“Josh has an enormous advantage that is totally well-deserved,” said Bob Seawright, chief investment and information officer at Madison Avenue Securities. “It is that he’s naturally funny and engaging. Boy, I wish I was funny the way he is, in a smart, helpful and interesting way.”

Brown is astutely aware of the power of his humor. “When I was growing up, I wasn’t particularly good looking, I wasn’t a good athlete,” he says. “I kind of had to develop a personality to fit in, and that as I got older I realized, ‘OK, I can make people laugh.’”

Indeed, humor is the wellspring of Brown’’s prolific media presence. An increasingly common form for Brown is the short video rant, which he films from his car against a backdrop of raucous hip-hop beats. A recent example has Brown upbraiding the new trend of coffee connoisseurship sweeping the nation. Clad in a Nike hoodie, backward baseball cap and sunglasses, he warns his followers that “these coffee a—holes are almost as bad as the craft beer a—holes, and they are comin.”

It is this same informal approach that is the hallmark of The Compound, Ritholtz Wealth Management’s YouTube channel. The firm is carefully curating its presence on this platform that dominates the media consumption of young millennials and generation Z, recently hiring a full-time video editor and social-media manager to accelerate its audience growth. While Brown wears a suit and tie on CNBC, on the compound he can be found wearing a Wu-Tang Forever hoodie—referring to the 1990s rap group — dropping F bombs and cracking wise.

Taken together, it is clear that Ritholtz Wealth Management’s media strategy isn’t aimed at the baby boomer generation that now owns 56% of the country’s wealth, but at the millennial who owns just 3%—for now.

Brown said that between the eight blogs run by Ritholz investment advisers, a typical month will see about 1.7 million page views, while the YouTube channel has grown from 10,000 subscribers to more than 20,000 since August 2019, when the firm hired its first full time video producer.

“Our audience skews younger than the readership of the Wall Street Journal, Barron’s or CNBC even,” he said. “Most of them don’t have any money, or they are first starting to make money. Which is fine, we’re still going to be here when they are ready.”

A key strategy for keeping Brown’s younger fans engaged in the years before they need full-service wealth management is Ritholtz’s robo-adviser product Liftoff, which made its debut on the Betterment platform last summer. Whereas a typical Ritholtz Wealth Management client has more than $1 million in liquid assets to invest, the minimum threshold for the Liftoff product is just $5,000. Brown says the firm makes little, if any money from Liftoff, but he sees users of the product, and his broader online fan base, as a “farm team of future clients.”

“We have a huge opportunity,” Brown says, when it comes to the millennial generation, the oldest of whom is nearing 40 years of age, in a business where the average financial adviser is 59 years old, and nearing retirement themselves.

“I’m 42. Two of my partners are in their 30s. We’re still going to be there when [the millennial generation] is ready,” he adds. “This is a multidecade bet that as people accumulate wealth, and more complexity arises in their lives…we will be the people they turn to when they need us.”