Home
Stocks
Market Extra: Junk-bond market gets first big test of year from coronavirus
Prev Article Next Article
This post was originally published on this site

Fears around China’s ability to contain a deadly coronavirus outbreak have given the U.S. junk-bond market its first major test of the year.

Laredo Petroleum Inc. LPI, +2.21%   and Range Resources Corp. RRC, +3.61%  were two energy companies in January from a deluge of U.S. businesses that raced to borrow in a newly emboldened speculative-grade, or junk-bond, market.

But as news out of China worsened this week, bonds from the two companies traded as much as 10% lower, and after rallying a bit Tuesday still were fetching average prices of only about 92 cents on the dollar near the closing bell, according to MarketAxess, a corporate bond trading and pricing platform.

“It doesn’t take much, given where valuations are and where we were a couple of days ago,” John McClain, a portfolio manager at Diamond Hill Capital Management told MarketWatch. “There’s not a lot of meat on the bone. Not a lot of yield in high yield.”

Prior to the recent selloff, JPMorgan pegged yields in the BB-rated segment of the U.S. junk-bond market at a record low of 3.89% on Jan. 15, versus a 30-year average of 9.8% for the entire sector.

While the broader U.S. junk-bond market recouped some losses Tuesday, this CreditSights chart shows the junk-rated debt of energy exploration and productions companies taking the hardest hit among bellwether sectors on a month-to-date basis through Monday. 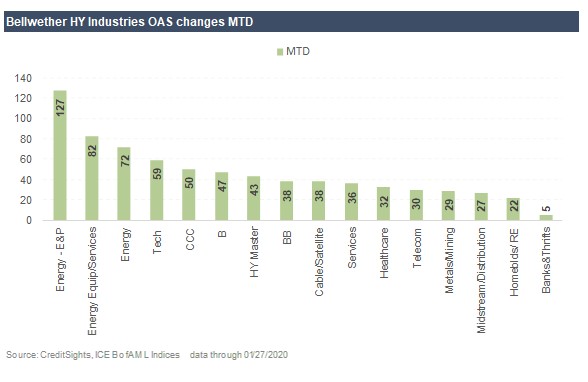 Investors tend to demand more spread, or compensation over a risk-free benchmark, to own bonds during bouts of market stress, or when they expect company defaults to rise.

Both instances can result in higher borrowing costs for companies looking to refinance maturing debt, or in more extreme cases, for credit to dry up entirely.

Check out: Why weak energy companies won’t likely get a lifeline from higher oil prices

The slight bounce in oil came as traders weighed a Reuters report that the Organization of Petroleum Exporting Countries may consider extending cuts to crude production to offset any fall in crude demand from the coronavirus outbreak.

Meanwhile, governments from the U.S. to France to Japan were organizing evacuations of staffers out of China on Tuesday, while estimates of the number of people sickened by the virus reached 4,515, withat least 106 dead, according to a report from China’s National Health Commission.

“One is that in December we had a huge risk rally. The market really ripped,” he told MarketWatch. But recent days also have seen investors grapple with the growing coronavirus threat and more uncertainty around the trajectory of President Donald Trump’s Senate impeachment trial.

Trump’s legal team wrapped up its oral defense arguments on Tuesday. But efforts by Senate Democrats to pressure Republicans to allow witnesses and new evidence in the trial have intensified this week after the New York Times reported that an upcoming book from Trump’s former national security adviser John Bolton describes the president wanting to withhold security aid to Ukraine in exchange for political favors, which could undermine part of Trump’s defense and dash hopes for a swift acquittal.

“Impeachment went from what Republicans like to call a ‘nothing burger’ to a ‘maybe burger,’” Terwilliger said.